Political football: How the Iranian government intervenes in sports 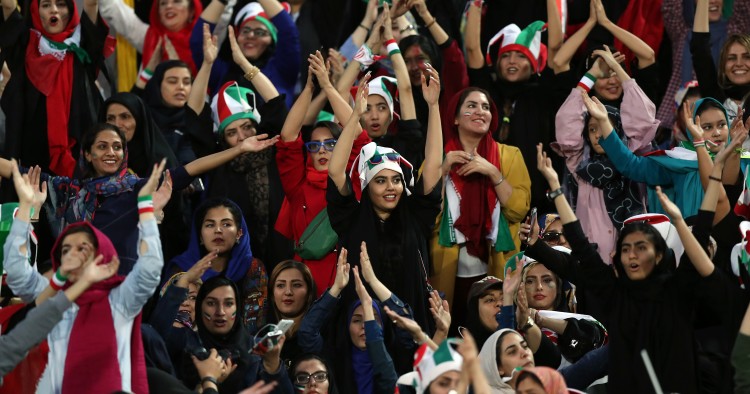 Last month, there was an online frenzy as approximately 2.5 million Iranians flocked to the Instagram account of the Asian Football Confederation (AFC). They were drawn to the page because Adel Ferdosipour, a football commentator banned from Iran’s state-run TV (IRIB), was slated to give live commentary on the Champions Asian League final.

Even though the game between Iran’s Persepolis and Korea’s Ulsan Hyundai was broadcast live on the IRIB, 800,000 more Iranians chose to watch the match on AFC’s Instagram page instead.

Ferdosipour, who was chosen as one of “the 20 most powerful people in Iran” by Newsweek in 2009, had been a fixture on Iranian TV for two decades thanks to the popularity of his soccer show, “90.”  He was widely appreciated for his direct style of interviewing. Instead of flattering football managers and players, he asked tough questions and discussed mismanagement and corruption in sports.

His popularity proved too much for the regime. Ferdosipour was taken off the air in March 2019 because, as former head of the IRIB Mohammad Sarafraz suggested in his book, “Story of a Resignation,” Iran’s Supreme Leader Ali Khamenei had demanded it.

It is often said that war is too serious to be left to the generals, but in the Islamic Republic, sports are too serious to be left to the athletes. Sports were not high on the agenda for the revolutionaries who overthrew Shah Mohammad Reza Pahlavi in 1979, but as sports have grown in popularity and in profitability, it has become increasingly politicized. Over the past two decades, most sports clubs and related bodies have been taken over by political or security-military organizations, with former Revolutionary Guards holding the top positions.

Former foreign minister Ali Akbar Velayati once vowed to transfer the management of sports to professionals when he ran in the 2013 presidential elections. He didn’t win, but even if he had, he probably would not have been able to deliver on his promise. The financial benefits of running a sports club are simply too great for the Revolutionary Guards to ignore.

The motives of the IRGC are not purely financial. The Guards see sports as a form of social control to be exploited in pursuit of domestic policy objectives. The country’s two most popular sports, wrestling and football, attract a young male demographic, often from poor socio-economic backgrounds, that needs to be managed and directed. Furthermore, sports have a symbolic value, as policies applied to the athletic domain project ideals for society at large.  Gender discrimination, for example, is reinforced through the ban against women attending football stadiums and limiting women sports.

Control over sports administration allows the government a powerful message about the primacy of religion over athletic endeavours. A critical match between Iran and South Korea in October 2016, was scheduled for the evening before the religious holiday of Ashoura, an important date for religious Shi’a. After FIFA refused to postpone the match, the clerical establishment ordered fans to don black clothing and chant slogans in honor of Ashoura.

The IRGC and Iranian football

Because of football’s popularity, there is significant involvement by regime insiders. The Revolutionary Guards’ transition from barracks to boardrooms began back in the mid-1990s, when they took on management roles in some of the country’s most high-profile sports.

In Tehran, Persopolis and Esteghlal, the two most popular clubs in Iran, are run by former revolutionary guards or figures connected to the deep state.  Mohammad Rouyanian, a former deputy head of police ran Perspolis for several years. Last October, Jafar Samiei, the former head of security at the Sports Ministry, was appointed as the new general manager of Perspolis. Other shadowy figures with ties to the Revolutionary Guards also have occupied top positions at Esteghlal.

The country’s sporting federations, such as football, judo, and wrestling, are managed by former IRGC commanders who have little experience in sports. Mehdi Taj, a former Revolutionary Guards commander from Isfahan, became a managing director at Perspolis before rising to head the country’s Football Federation.

Of course, this intersection of deep state and sports can lead to embarrassing situations. Even for seasoned professionals, navigating the web of former security and intelligence officers can be treacherous.  This new football season, the familiar figure of the former national team manager of Ali Daei has been missing from the sidelines. Daei, who holds the title of all-time men’s international goal scorer, has been unofficially banned from the game.

Ali Daei’s problems began when he gave a press interview soon after his dismissal as manager of Saipa, a team that was languishing in the middle of the league table. In the interview, he revealed that the real name of the club’s CEO was not Mostafa Modabber, but Ghafoor Darjezi, a Revolutionary Guards commander and former director of security at the state television station (IRIB).

What Daei didn’t know was that Darjezi was also a pseudonym. The real name of Saipa’s CEO was neither Modabber nor Darjezi but Amir Mansour Bozorgian-Asl, who was part of the assassination squad that killed Abdul Rahman Ghassemlou, the head of the Democratic Party of Iranian Kurdistan, in 1989 in Vienna.  Bozorgian’s name appears in the German court proceedings for the killings in Mikonos of another group of Kurdish leaders. Daei had unknowingly unmasked Bozorgian and as punishment he hasn’t been hired as a football manager since.

The Iranian government has been interfering in sports for years, but international sporting bodies are only now pressing for reform.

The politicization of Iranian sports has come under greater scrutiny since the execution of Navid Afkari, a twenty-seven-year-old wrestling champion who was hanged last September for taking part in anti-government protests more than two years ago. The government also charged him with the killing of a security officer, but few believe the legitimacy of his conviction, as Afkari and his brothers were tortured to obtain confessions and exculpatory evidence was dismissed. Afkari’s rushed execution, which took place before his family could visit him to say goodbye, caused an international outcry.

The recently formed “United For Navid” campaign, made up of Iranian athletes and human rights activists, was conceived with the aim of pushing for the suspension of the Islamic Republic from international sports as a punishment for Afkari’s execution.

The campaign has also urged FIDE, the world chess body, and the International Judo Federation to take strong action against the Islamic Republic for forcing Iranian athletes to throw matches to avoid competing against Israeli athletes. As part of its efforts to show the politicization of Iranian sports, the United For Navid campaign is preparing legal documents for the International Olympic Committee.

Iranian sports are dominated by military and intelligence entities. It remains to be seen if FIFA and other international bodies can loosen their grip. It will take a major effort.

Kambiz Foroohar is a journalist and a strategic consultant focusing on national security and Iran. He co-authored with Masih Alinejad “The Wind in My Hair,” a book about the struggle for women’s rights in Iran.