The Pope, the UAE, and the Muslim Brotherhood 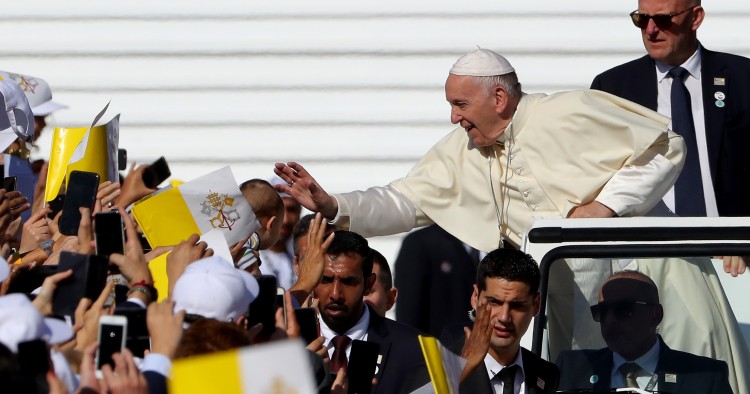 At the beginning of February, Pope Francis paid a historic visit to the United Arab Emirates (UAE). For the first time in history, a Catholic pope set foot on the Arabian Peninsula. Since the Second Vatican Council in the early 1960s, successive popes have engaged in extensive dialogue with and preached tolerance toward other faiths. Through his visit, Pope Francis not only continued previous papal efforts to build inter-faith trust and tolerance, but also reached out to hundreds of thousands of Catholic expatriates living in the UAE.  However, much more was at stake for his hosts. For the Emirati government, the pope’s visit served to highlight its efforts to promote the UAE as a land of tolerance and to bolster the UAE’s geopolitical objective of discrediting and, if possible, criminalizing the Muslim Brotherhood in the international community.

Comparatively speaking, the UAE has been religiously tolerant for a long time, and not only of Christians. Other faith groups, including Shi’as, Sikhs, Baha’is, Hindus, and Jews, have lived peacefully in the UAE and even thrived. The UAE opened its first church in 1965, while its northern neighbor, Qatar, didn’t follow suit until 2008.

However, the UAE only began to promote itself as a champion of religious tolerance in the 2010s. The Emirati government has undertaken a number of steps to this end. In 2015, a law was passed to combat discrimination and hatred. This was followed by the establishment of a ministerial post to promote tolerance, and the creation of a National Tolerance Program in 2016, as well as the launch of the International Institute for Tolerance in 2017. Finally, the government declared 2019 to be the “Year of Tolerance.” What all of this actually does for religious tolerance is difficult to gauge, but these initiatives do seem to be part of an effort to promote the UAE’s image as a religiously tolerant state.

Most remarkably, perhaps, Muhammed bin Zayed, Abu Dhabi’s crown prince and the UAE’s de-facto ruler, visited the Vatican in September 2016 and met Pope Francis. Throughout the pope’s visit to the UAE, the crown prince repeatedly referenced the UAE’s commitment to inter-faith dialogue and tolerance in his statements, calling the UAE in one of his tweets “our homeland of tolerance.”

Although the UAE has always been religiously tolerant by regional standards, this self-branding only began after the UAE first perceived the Muslim Brotherhood as a significant security threat. Thus, it should be viewed as a component of a wider strategic campaign against the Brotherhood, both domestically and throughout the region. Though it is uncertain exactly when the Emirati government first perceived such a threat, its campaign against the Brotherhood was in full swing by the 2000s, when Mohammed bin Zayed told his American interlocutors that the UAE was waging a cultural war against it, according to Wikileaks documents. There are also reports from that decade indicating that the regime was purging or marginalizing members and sympathizers of the movement in educational and state institutions.

Nonetheless, it was a slow-moving and low-intensity cultural war mostly hidden from the public view. It gained visibility, pace, and intensity only after the outbreak of the Arab Spring. Suspecting that the Brotherhood was conspiring against the regime, the UAE took more serious measures to suppress the movement, stripping the citizenship of six Brotherhood members in December 2011 and launching a wave of arrests in March 2012. In tandem with this increasing hostility toward the Brotherhood, the UAE also waged a rhetorical campaign against the movement, portraying it as a security threat for the Gulf. The UAE levelled accusations against the Brotherhood, claiming it nurtured transnational loyalties, introduced an ideology that was alien to the Gulf, and, most significantly, promoted violence. This rhetorical campaign eventually culminated in the UAE’s declaration of the Brotherhood as terrorist organization in November 2014.

Today, the UAE aims to wholly discredit the movement in the international community, especially in the West, by equating its ideology with Salafism and jihadism. Meanwhile, the UAE portrays itself as the exact opposite, a religiously peaceful and tolerant state – a portrayal bolstered by the pope’s recent visit.

While waging such a rhetorical campaign against the Brotherhood, the UAE’s rulers have sought to protect themselves from religious criticism both at home and abroad. Lacking local religious scholars with international stature, the UAE mobilized foreign scholars to found the Muslim Council of Elders in 2014 under the chairmanship of Sheikh Ahmed el-Tayeb, the grand imam of al-Azhar, one of the most prestigious centers of education in the Muslim world. Based in Abu Dhabi, the UAE’s capital, the council aims to promote Islam’s humanitarian values and tolerance and fight sectarianism and violence. As such, it contributes to the UAE’s religious credentials and legitimizes the UAE’s promotion of tolerance and inter-faith dialogue in the context of Islam. Unsurprisingly, Sheikh Ahmed was present during the pope’s visit to the UAE, and together they signed the “Human Fraternity Document.”

The UAE government has expanded, internationalized, and Islamicized its campaign against the Muslim Brotherhood. The movement has faced harsher state campaigns in the past, however, and will likely survive, despite the UAE’s innovative tactics and efforts to highlight its religious tolerance even as it enacts more traditional repressive measures. How the Brotherhood will adapt to this challenge is as yet unclear though.