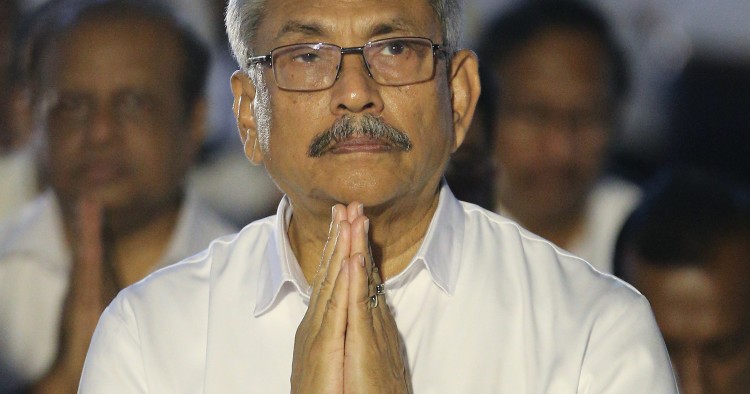 Gotabaya Rajapaksa was elected as Sri Lanka’s 7th Executive President, having secured 52.25% of the votes against his main rival, Sajith Premadasa, who tallied 41.99%. Gotabaya took the oath of office at the Ruwanweliseya Buddhist temple in Anuradhapura.[1] His having chosen Anuradhapura rather than the capital Colombo as the site of his swearing in ceremony was an indication of Gotabaya’s loyalty to the Sinhala-Buddhist community. While some interpreted Gotbaya’s first post-election public address to be conciliatory, others regarded it as expressing favoritism toward the Sinhalese majority.[2]

This election was arguably the most dynamic, tough and competitive in the country’s history.[3] A record number of 35 candidates filed their nominations for the top position. Despite the long list of presidential candidates, it was a two-man contest from the beginning. Both the Sri Lanka Podujana Peramuna (SLPP) and United National Party (UNP) managed to attract thousands of supporters for their pre-election rallies. Although this gave the impression that the UNP had the organizational capability for mass mobilization, crowd size was indeed not a reflection of the final vote count.

National security, law and order and economic development dominated the electoral landscape following the deadly Easter bombing attacks and poor economic growth.[4] Interestingly, Premadasa led a Sinhala-Buddhist campaign, a departure from Wickremesinghe’s pro-West and liberal stance. He continued the same trajectory as his late father, Ranasinghe Premadasa, in order to appeal to the conservative Sinhalese community, who usually vote for the SLFP (now the SLPP). During a major election rally, Premadasa said that he has the “patriotism and the Buddhist qualities of Ranasinghe Premadasa” and will give “priority to Buddhism.”[5] Harim Peiris, a former advisor to the Sri Lankan government, argued that there was a stark difference in the narratives of the two Sinhala-Buddhist campaigns. According to Peiris, while Premadasa’s campaign took pride in the tradition, culture and identity of Sinhala nationalism, Gotabaya’s message was more of how the Sinhalese community is under a threat and requires a strong leader to safeguard them.[6]

The political alliances that formed this election were not as polarized as in the previous polls. In 2015, the democratic and pluralistic camp had crystallized against the authoritarian and communalist camp. However, the polling results showed otherwise; there is a growing polarization along ethno-linguistic lines. While the Sinhalese-dominated areas voted overwhelmingly for Gotabaya, the minority areas in the North and East gave their votes to Premadasa. The voting patterns from the polls indicated the divergence in key priorities for the majority and minority communities. Whereas Southern voters have prioritized national security and strong leadership, the Northern and Eastern electorates are more concerned with reconciliation, human rights and rule of law.

One of the reasons why Gotabaya received a decisive victory was due to his reputed knack for resolving highly complex issues and executing his strategies despite the mounting issues, challenges and controversies facing him.

Gotabaya’s background is not devoid of controversy. His ideological orientation as a communal, anti-liberal and nationalistic leader may stoke fear that his administration will lead to greater ethnic division, polarization and fragmentation. Gotabaya’s presence as the chief guest at the inauguration of a leadership academy organized by the Bodu Bala Sena (BBS), a Buddhist extremist group, in 2013, has led to criticism that he has close affiliations with the hardline Sinhala Buddhist base. Furthermore, there are several pending cases against Gotabaya, who holds dual Sri Lankan-American citizenship, in U.S. courts.[7] In one case, he is accused of ordering the murder of a newspaper editor, Lasantha Wickrematunge, and in another the torture of a Tamil detainee, Roy Samathanam. While these cases have complicated his relations with the Tamil community, paradoxically, they helped to increase support for Gotabaya among the Sinhala-Buddhist base, which contended that human rights activists and other petitioners were seeking to undermine those who had rescued the country from civil war.

As a result, Gotabaya managed to win on the strong Sinhala vote without giving in to the major requests placed by Tamil political leaders. The Tamil National Alliance’s (TNA) November 18 press release stated that the SLPP’s performance had been “dismal” and brought examples how the rule of law, separation of powers, democratic freedoms and civil liberties had eroded under its governance.[8] The TNA also mentioned that the new government would need to address issues of an acceptable political solution, missing persons, resettlement, rehabilitation, release of lands and people in custody. Many of these points coincide with the 13-point demands that it formulated with the Tamil Students Union from Jaffna University. The kind of devolution of power that the Tamils leaders had demanded is unlikely to pass through given that Gotabaya had summarily rejected these demands (except for the 13th amendment).

There is a general skepticism as to whether Gotabaya will create a safe space for inclusion, harmony and social cohesion. The UN Human Rights Council Resolution co-sponsored by Sri Lanka in 2015 is unlikely to progress any further under Gotabaya’s presidency. The previous Yahapalana government faced bureaucratic hurdles, resistance and lack of support in addressing the transitional justice measures. As a result, it managed to pass resolutions to launch the office of missing persons and reparations office with much challenges and delays. Former Prime Minister Ranil Wickremesinghe was trying to establish a truth and reconciliation commission earlier this year. The new government may even backtrack on these promises, given that it had vehemently opposed any efforts to launch investigations into the alleged war crimes.

Gotabaya’s pledge to eliminate Islamic terrorism could create anxiety among Muslims regarding what measures his administration might employ. One expert speculates that a counterterrorism campaign could lead to greater surveillance, arbitary arrests and detention of  members of both the Tamil and Muslim communities.[9] There could also be greater censorship of the media and civil society groups. Activists, journalists and writers could receive regular visits from security personnel; and their work may come under close state scrutiny. Should the space to speak freely contract, this may result in greater self-censorship as well. A genuine and comprehensive outreach to the minority communities would be essential in forming a new narrative about the country’s inter-communal relations. The Muslim community would need reassurance that it would not be targeted or victimized on the pretext of national security.

Sri Lanka’s relations with India have always been very complex due to the presence of the Tamil community in the northeast. In fact, the treatment of the Tamil community has been a key driver of their bilateral relations for decades. India’s involvement in the Sri Lankan civil war severely damaged their relationship. New Delhi was trapped between the mounting concerns in the state of Tamil Nadu and encouraging Colombo to find a peaceful solution to the ethnic strife.[10] The intervention by Indian peacekeeping forces (1987-1990) further strained relations with Sri Lanka.

Despite these adverse reactions, Gotabaya’s highly anticipated visit to New Delhi on November 29, at Modi’s invitation,[12] produced a fruitful outcome of India’s offer of US$400 million credit to support infrastructure projects and US$50 million to combat terrorism.[13]

Delhi appears to be making a conscious effort to harmonize and reset relations with Colombo. India’s offer to provide attractive loans could provide an alternative to Chinese investments in the country. It could also propose new development projects in impoverished Sinhalese areas, including Uva and Sabaragamuwa. Although these provinces are highly underdeveloped, they have a pool of skilled labor. India has a vested interest in investing in Sri Lanka’s security apparatus. As terrorism and extremism turns increasingly transnational and borderless, any security threat in Sri Lanka would pose a threat to the region’s security. Shortly after the deadly Easter Sunday bombings, India’s National Investigation Agency unfolded a plot to launch a suicide attack in Kerala by an ISIS suspect who was supposedly inspired by the bomb blasts in Sri Lanka.[14] The rising threat of Islamic extremism in Sri Lanka is likely to proliferate across the region.

The decisive victory of Gotabaya indicates that the Rajapaksas were key players in the country’s political landscape all along. Although the SLPP is a relatively new party (a relaunch of the Sri Lanka National Front), its recent success indicates that the electorate voted for the leaders rather than the party itself.  Many in the Southern hinterland are strong supporters of Rajapaksa and were nostalgic about the economic prosperity the country saw during the period that ended the civil war including increased infrastructure development and economic growth.  On the other hand, the opposition is fragmented and weak. Some party leaders and senior members including Premadasa and Mangala Samaraweera have either resigned from the party or their portfolios. The UNP’s fortunes are indeed not in its favour. It would need to seek new policy changes and revamp itself in order to survive as a major political party.

The international community should proceed cautiously, lest pressuring the new government to push forward its national reconciliation policy under the 2015 co-sponsored resolution be repudiated by the new president and push Sri Lanka further into the hands of China. While New Delhi has stressed the need for Gotabaya’s administration to take forward the national reconciliation process, presumably to assuage Tamil Nadu leaders, it has not explicitly stated what it means by reconciliation. It may need to drop its claim on implementing the 13th Amendment in Sri Lanka that seeks to devolve autonomy to the provinces, a long-standing demand of the Tamil community. Although Sri Lanka responded positively to Indian Minister for External Affairs S. Jaishankar’s request on reconciliation, terms such as peacebuilding, human rights, reconciliation and transitional justice have been viewed with suspicion in the past.

A more promising path forward might be for the United Nations to redraft the terminology to social cohesion or social integration in less politically-loaded terms than reconciliation and peacebuilding. Social cohesion/integration is seen as newer and broader terminology that captures a wide range of issues, including capacity building, interfaith dialogue and community engagement. Alternatively, it could reconceptualize the current transitional justice model by moving from retributive justice to restorative justice to focus on the humanitarian rather than accountability aspects. The new government has a difficult task ahead in managing majority-minority relations. A genuine effort is imperative in winning the trust of the estranged communities.

[3] Chulanee Attanayake and Roshni Kapur, “Commentary: After a five-year hiatus, why the Rajapaksas are back in power in Sri Lanka,” Channel News Asia (CNA), November 18, 2019, https://www.channelnewsasia.com/news/commentary/rajapaksa-wins-sri-lanka-presidential-election-12104592.