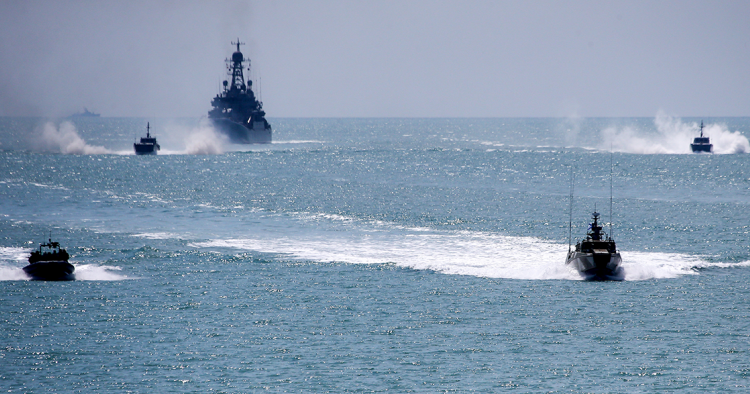 Suddenly and seemingly without warning, Russian forces amassed in Crimea and near the Ukrainian border in April 2021. Heavy armor, long-range missiles and artillery, modern air forces, and elite airborne infantry units deployed into positions that raised alarm in Ukraine and throughout Europe. The situation today appears stable, but reports of new and upgraded hardware, including unmanned vehicles, demand a fresh evaluation of the Russian way of war.

Russia has a proven history of quickly updating both equipment and doctrine based on its military experience in the Black Sea and adjacent regions. In 2008, despite securing its strategic objectives in its war with Georgia, Russian leadership responded to tactical and operational failures with major changes. Lessons from Georgia led to a leaner, brigade-oriented force structure; a revamped, regional command system; and an increased focus on precision-strike and modernized weapons that were all put on display when Russia commenced operations in Ukraine in 2014.

Russia’s way of war has changed dramatically since 2008. The Russian military will likely attempt several more reforms based on its operations in Syria since 2015. There, Russia enabled its expeditionary forces in large part with naval access via the Black Sea, and they leaned more heavily on airpower than in any prior Russian operation.

Ukraine and other Black Sea states can glean details from the operations in the Middle East and the April 2021 buildup to project Russia’s next “New Look.” These recent actions offer plenty of evidence about a future Russian force that will include a greater focus on information, unmanned vehicles, and airpower, which must inform Black Sea military planning.

As outlined in a recent report from the Institute for the Study of War, Russia views its Syrian operation as a major learning experience with a few key takeaways. First, Russian leadership views information as an important area of emphasis for the near future. They hope to gain an edge via accurate battlefield monitoring and the distribution of communications to the unit level, thereby outstripping opponents in both speed and the quality of decision-making. Observers have noted that results from this lesson were already visible in the Kavkaz 2020 exercises, in which Russian forces demonstrated inter-service and cross-domain communications in a complex operation.

A second and related lesson comes from the Russian experience with unmanned vehicles or drones. Russian officers still see drones as an enabler of the information battle, as demonstrated by their plan to replace Su-24MR squadrons with Altius surveillance and reconnaissance drones. Likely eyeing the tactical success of Azeri drones (especially those that destroyed Russian-made air defenses) in the Nagorno-Karabakh conflict, Russia is also rapidly expanding the strike capabilities of its drone fleet. The Russian Ministry of Defense began experimenting with several unmanned concepts, including urban combat vehicles, anti-submarine maritime swarms, and AI-enabled air swarms. Other announcements detail unmanned systems serving frontline logistics and loitering munition/kamikaze roles.

Airpower also appears poised to play a larger role in future Russian operations. Russian perceptions of airpower have changed: Aerospace forces were Russia’s primary actor in Syria, and officers believe the presence of modern aircraft and air defenses dissuaded some U.S. actions there and can continue to shape the battlespace going forward. Based on the doctrine developed following Georgia in 2008, shown in Ukraine in 2014-15, and expanded in Syria in 2015-18, any future operation will likely involve an initial air assault on key command and infrastructure nodes. Moreover, the 2021 buildup in Crimea included Su-25SM3 attack craft, Su-27SM and Su-30SM fighters, and Su-24M and Su-34 bombers — some of the most upgraded aircraft in the Russian arsenal.

Black Sea states can take their own lessons both from Russia’s new emphases and from recent conflicts. First, while Russia has emphasized unmanned weapons, neighboring states must avoid overlearning the lessons of the Nagorno-Karabakh conflict. Ukraine recently purchased Bayraktar TB2 armed drones from Turkey following their success against Armenian armor and older antiair systems in Nagorno-Karabakh. However, the hype around TB2s may be misplaced. These drones suffered higher rates of attrition in Syria when faced with air defenses that pale in comparison to systems that Russia fields. A U.S. cyber officer also described drones as far from decisive in the Nagorno-Karabakh fighting, saying that electronic warfare and targeting were more important and that while sensor-to-shooter links were adequate there, they would need to be faster and more robust in a contested environment.

If drones are coupled with other firepower, they can play a limited role in building a deterrence strategy. Russia relied on drones in Syria primarily to identify targets for artillery and protect flanks, not for significant firepower. Russian bases in Syria also came under attack by low-cost drones, resulting in both loss of life and damage to equipment. That attack spurred Russia to develop counter-drone concepts, including plans for unmanned antiair vehicles and “flying minefield” drone swarms, while electronic warfare will remain a crucial element. The recent buildup in Crimea included a significant amount of electronic warfare and anti-drone systems. Recently, some Russian T-72B3s have been spotted with defensive screens on their turrets to prevent attacks by Javelin missiles and drone-launched ordinance that strike from above. Therefore, drones can serve as a low-cost threat will prompt caution on the part of Russian forces, but they will likely suffer high attrition rates and will not turn the tide of any conflict.

Russia relied heavily on airpower — and naval power — for both precision fires and logistics in Syria. Russian officers now view both domains as key enablers of large-scale operations. However, Russia’s forces share a lack of experience with their U.S. counterparts: They have not had to operate in a scenario in which credible opposition forces contested either domain. Russia may have addressed the problems that plagued air operations in Georgia, but viable air defenses will affect leadership’s assessment of potential assaults. Meanwhile, in the eastern Mediterranean, some elements of Russia’s naval support mission failed despite the lack of any threat in the maritime domain. Here again, capabilities that credibly threaten Russia’s naval assets will make any future mission in the Black Sea far more dangerous than Syria.

Some recent steps in these domains show Black Sea states are on the right track. This year, Romania purchased the Naval Strike Missile from Norway and complementary command equipment from the U.S. Ukrainian forces might want to follow suit, but this purchase alone presents a real threat to Russian vessels operating from Sevastopol. To disrupt Russian airpower, Ukraine and Georgia may also want to follow Romania in purchasing modern air defense platforms such as Patriot missiles; however, a smarter strategy might involve acquiring smaller, less costly shoulder-launched or medium-range missiles, which Russia had identified as a threat in Syria. Russian pilots have not faced competent forces targeting them with man-portable air-defense systems or other air defenses for a long time. For counter-drone systems, it may be preferable to see what the U.S. defense industry produces in the next year or two — a low-cost, easily-dispersed system would fit the bill.

Russia identifies one other weakness in the self-assessment of its officer corps. As it attempts to close the gap with Western militaries in communication and control, leadership believes they still lag in officer creativity and flexibility. In Georgia, while it did not alter the outcome, Russian forces were dismayed by the effectiveness of Georgian small-unit tactics and the rapidity of responses to Russian maneuvers. Russia’s army in particular still relies heavily on conscripts to fill its ranks. Issues of officer flexibility and the quality of decision-making are difficult to quantify, but Black Sea states can continue to exploit this advantage. They should emphasize joint training, with the U.S. and NATO as well as among neighbors. Building diversity in officer corps will lead to greater flexibility. Lessons the U.S. and allies learned in Iraq and Afghanistan could be invaluable in informing how smaller states train to defend against larger forces. Most importantly, states throughout the Black Sea need to see the Russian threat as a joint problem and build a joint doctrine to counter it.

Russia’s neighbors in the Black Sea are under constant military and political pressure from the Kremlin. They are building a deterrent strategy and have made strides over the past few years in adding key capabilities. However, deterrence by outright denial is a tall task, even between states with similar resources available; here, Russia will maintain a large advantage in expenditures compared to Ukraine, Georgia, or any other Black Sea nation.

Black Sea states can inform a viable strategy by assessing Russia’s recent operations and deployments. Whether in Georgia, Ukraine, or Syria, Russia has committed forces only when leadership foresaw a rapid, decisive outcome and the ability to operate unchallenged in enabling domains. Therefore, continuing to add capabilities that pose threats to maritime and air forces, developing the ability to disrupt unmanned vehicles, and demonstrating via exercises that Russia would face capable, creative tactical leadership in any conflict could go a long way toward altering the Kremlin’s calculus. It may not be possible to thwart all potential Russian military objectives, but Black Sea states can show that in any scenario, Russia’s officers will need to adapt to challenges unseen in the last two decades and face fighting lasting long enough for outside forces to arrive in-theater.

Dan McCormick is a research intern with MEI's Frontier Europe Initiative. The views expressed here are his own.