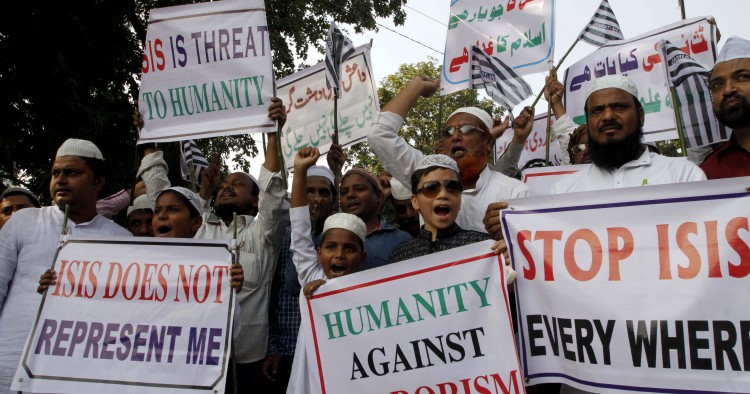 The emergence of the so-called Islamic State (also known as ISIS, ISIL, or by its Arabic name, Daesh) in the wake of the Arab Spring uprisings has changed the regional and international political landscape. The rise of ISIS took the world by surprise, as the terror outfit rapidly became a well-funded and well-managed entity that succeeded in capturing large swathes of territory in both Iraq and Syria.

This essay discusses the threat that ISIS has posed to India, which has significant stakes in the Gulf but remains an ambivalent presence in the region. The future trajectory of the world’s largest democracy’s relations with the Middle East remains a grey area, but one that in the future, could become a defining relationship for global security.

India’s Stakes in the Gulf

India has substantial and growing stakes in West Asia, notably the well-being of the large expatriate population, the country’s heavy reliance on energy supplies sourced from the region, and increasing economic investments there.

The Indian government is responsible for the safety and security of nearly 8.2 million of its citizens who currently live and work in West Asia, primarily in the Gulf.[1] In fact, much of India’s diplomatic capital currently is spent on managing this expatriate community, whose size is comparable to the entire population of Finland. Protecting these people has taken precedence over India’s policies towards the region. For example, during the First Gulf War, India did not condemn Iraq’s invasion of Kuwait as it hoped to use its good relations with then president Saddam Hussein to ensure safety of more than 100,000 Indians there.[2]

India, which has the world’s fastest growing economy, thanks to critical reforms implemented during the early 1990s, is also a voracious consumer of natural resources. Today, India imports more than 75 percent of the oil, and more than 55 percent of the natural gas that it consumes. Over half of these imports come from the Middle East, with Saudi Arabia and Iran being the leading suppliers. India spends in excess of $150 billion per annum ($64 billion in 2016 due to low oil prices) on oil imports.[3]

Over the years, India has scrupulously adhered to non-interventionist policies in the region, and as a consequence has garnered a measure of appreciation and goodwill.[4] But the rise of ISIS posed fresh challenges for Indian policymakers. One of the examples that follows reveals the heightened exposure of India’s burgeoning economic interests in the region, while the other underscores the vulnerability of its sizable expatriate workforce in the region. These examples also reveal both the modalities and limitations of India’s responses to the ISIS threat.

The first test for India occurred in April 2013, as ISIS was gaining ground in Syria. Then, perhaps for the first time, India faced a situation where it was set to lose millions of dollars in economic investments to a non-state actor. Eight years earlier, India’s state-owned company ONGV Videsh (OVL), tasked with handling the country’s overseas oil acquisitions, had invested in Syria’s Al Furat Petroleum Co. by purchasing 37 percent of the company’s stake along with partners China National Petroleum Corp (CNPC). OVL had also won the bid to conduct exploration and production activities at Block XXIV in the same region. However, OVL, along with its Chinese partner, had to abandon its investments in the region and shift its offices to Dubai temporarily as ISIS took over most of the region’s oil infrastructure. As of the time of writing, OVL still had no expectation of recovering its investments despite guarantees by Damascus, citing success in suppressing ISIS’s growth.[5]

ISIS’s use of oil from Syria and portions of Iraq (mainly areas around Raqqa and Tikrit) is an immersive and impressive study in itself of a non-state militant organization. Initially, the group’s oil trade was made possible by the fact that neighboring regional powerhouse Turkey maintained very lax checks and balances, which in turn allowed ISIS to construct a cottage industry out of the illicit trade which by some estimates earned more than $1 billion in 12 months.[6] The Turkish trade city of Ceyhan became a prominent sale point for smuggled ISIS oil, which was sold for as little as $17 per barrel against market price of more than $60 per barrel. Demand for ISIS fuel increased purely due to pricing, as oil coming into Ceyhan from Kurdish regions was sold at the market regulated prices.

During the very period in which the rise of ISIS had forced OVL to abandon its investment in Syria and ISIS’ oil smuggling operations were in full swing, India reportedly bought oil from Kurdish suppliers and Turkish companies, via Ceyhan, bringing the country’s energy security, knowingly or unknowingly, directly in the path of the region’s conflict.[7] Meanwhile, however, New Delhi’s posture with respect to the Syrian conflict itself — with the role of ISIS subsumed in it — converged with that of Russia, historically perhaps India’s only true strategic partner on the world stage. During Indian President Pranab Mukherjee’s visit to Jordan in 2015, the then Secretary (East) at the Ministry of External Affairs said, “… the Indian position is that Russian military involvement in Syria is to halt the advances of the Islamic State (ISIS).”[8]

The position articulated by President Mukherjee also reflected India’s strong stance against the ‘good terrorist bad terrorist’ argument and New Delhi’s frustration with the United Nations’ inability to agree on a concrete definition of what constitutes a ‘terrorist.’ In December 2016, India abstained from voting on a U.N. resolution calling for an immediate ceasefire in Syria, saying it did not want to mix “humanitarian issues with political issues.”[9] The adoption of this position could be regarded as the byproduct of a diplomatic balancing act by Delhi between the U.S. and Russia, with the latter’s efforts against ISIS perhaps judged by Delhi as being potentially more fruitful for long-term Indian political and economic interests.[10]

The second test for India occurred in mid-2014, when 39 Indian construction workers were abducted by ISIS (or one of its smaller affiliates) reportedly in and around the city of Mosul in Iraq, a bastion of ISIS and home to many of the organization’s leaders. In response, India sent a top diplomat and Middle East expert, Suresh Reddy, to Baghdad and Erbil in order to try to locate the missing persons.[11] Here, it is important to note that, in gathering intelligence regarding the fate of the abductees, Delhi sought to capitalize on the goodwill it had accrued over the years with elements of the Ba’athist regime in Iraq by reportedly reaching out to some of those among them who had fallen in with ISIS. Prominent Ba’athist generals, such as Azhar-al-Obeidi and Ahmed Abd al-Rashid were known to have been given the charge of the cities of Mosul and Tikrit.[12] This aspect of the Indian response parallels Delhi’s approach in the Syrian case, where Delhi has sought to maintain open channels of communication with the Assad regime. Yet, it is not clear how much, if any, headway was made through these contacts.

India Faces Its Own Limitations

The cases of OVL’s investment loss in Syria and the abduction of Indian workers in Iraq showcase India’s inability, both politically and militarily, to protect its economic investments abroad. In the military sphere, India has a bulging defense budget, now exceeding $50 billion per annum. However, progress has been slow in developing contingency plans for protecting the country’s overseas interests. While it can be argued that India’s defense capabilities still may not be big enough, its recent counter-piracy operations in the Indian Ocean and off the coasts of Somalia and Yemen have shown that the Navy is comfortable projecting power far from the shores of the subcontinent. And development of such capacity and capability at a manageable level has been taking place at a healthy pace over the past decade.[13]

Nevertheless, India today lacks a white paper outlining how it plans to secure its economic interests, including immovable assets, in the Middle East. It is becoming increasingly clear that this situation is untenable. In recent years, Indian companies have displayed their intent to bid for large projects in the region in spite of the risks. In 2013, for example, Mumbai-based Reliance Industries Ltd (RIL) was shortlisted among six other companies to develop the al-Nasiriya oil fields north of Basra in southern Iraq.[14] Theoretically, were such projects to be undertaken, the host nation would bear responsibility for ensuring their security. However, if it were unable to do so, the Indian government would then no doubt come under pressure to respond. For this reason alone, India should develop the capabilities necessary to ensure that major oil facilities — including though not limited to those in which its own companies are directly involved — do not fall under militants' control and major routes to transport these natural resources such as Basra port and the Strait of Hormuz (a pathway largely under the influence of Iran) remain accessible to international shipping.

However, there is another reason why India should act thoughtfully yet expeditiously to lay the groundwork for acquiring these capabilities. The first reason is that India can no longer assume that the United States will continue to play its traditional security role in the Middle East indefinitely. The United States itself is becoming energy self-sufficient; moreover, its clout in the region has been diminishing.  Whether a U.S. retrenchment occurs gradually or in the highly unlikely event that American forces are withdrawn abruptly, it will leave a vacuum that developing Asian economies such as India, China, Japan and South Korea, which rely heavily on Middle Eastern oil and gas, will have to fill.

Indeed, analysts predict that by 2035, 90 percent of the Gulf’s oil will be exported to Asia. Thus, the stability of oil supply would become critical for governments in New Delhi, Beijing, Tokyo and others. Efforts have been made to construct an Asian led ‘importers-OPEC’ to form a basic alliance between large importers in order to protect supplies from the Gulf.[15] However, due to immense geopolitical complications between these nations themselves (i.e., India-China and China-Japan), the development of such an arrangement seems improbable in the near future. In the meantime, China is reportedly developing a base in Djibouti[16] and could use its newfound foothold in Gwadar, Pakistan to protect these larger interests in the Middle East.[17]

India will have to forge closer bilateral ties on the security front with regional powers, opening a new chapter in India-Middle East relations, which would likely generate new challenges for New Delhi in juggling the various state and non-state actors exerting influence upon the region from within and beyond it. Even as India remains slow in its progress to achieve the same, a larger role for New Delhi in the region in the decades to come is inevitable, preparations for which, although on a small scale for now, are underway.