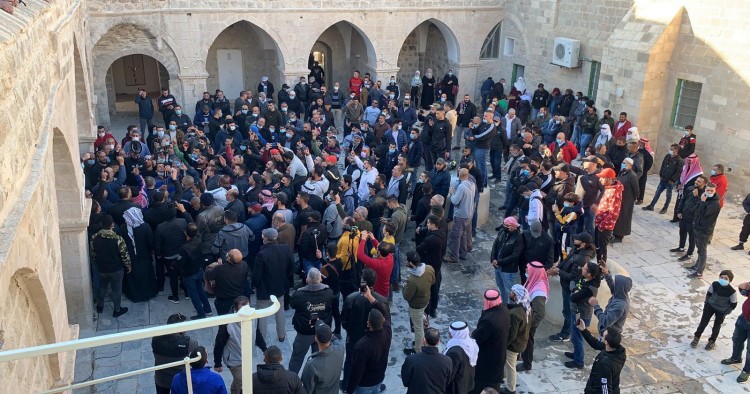 Until December 26, 2020, techno music was not a common topic of conversation in Palestine. That changed when Sama Abdulhadi, a famous techno DJ, gave a concert at Maqam Nabi Musa that provoked a backlash from religious conservatives.

Abdulhadi, who is a Palestinian living abroad, decided to return to her homeland to perform three concerts that would be streamed on Beatport, a website specializing in techno music. She reached an agreement with the Ministry of Tourism to perform at Maqam Nabi Musa for a crowd of about 30.

The clash at Maqam Nabi Musa brings up a question that reflects the clash over the social identity of Palestinians: Is Maqam Nabi Musa a sacred religious site or a touristic one, and can it be both? The site features a mosque for solemn prayer, but also a hotel for leisure-seeking travelers. The question concerning the site’s primary purpose is not just about what type of events and activities the Maqam should host; this question carries symbolic weight. In Palestinian society, how much can the modern coexist with the traditional, the secular with the religious?

Many Muslims believe that Maqam Nabi Musa is the final resting place of the Prophet Moses. While Jews believe that Moses never crossed the Jordan River and that he is buried somewhere on its east bank, according to popular Islamic tradition the location of his burial was revealed in a dream to Sultan Saladin in the twelfth century. Over the years, the site has at times been neglected and at times venerated. Recently, it has often been used for cultural and folkloric events, including Sufi rituals. It is perhaps fitting that the insistent beat of techno music, like that played at the Maqam by Abdulhadi, hearkens back to the incantatory chants of Sufis.

In contrast to the sounds of music and chants, Palestinian officials were initially silent, despite having granted official permission for the event. As the social media bullying escalated, Abbdulhadi was scapegoated to ease pressure on the government. Public anger, however, led Palestinian Prime Minister Mohammad Shtayyeh to form a committee to investigate the incident. Moreover, the police in Jericho arrested Sama for desecrating a religious site and holding an event that violated COVID-19 regulations.

Palestinian defenders of human rights quickly came to her aid. Ammar Dwaik of the Independent Commission for Human Rights issued a strongly worded statement on December 29 calling for Sama’s release and placing the blame on the Ministry of Tourism. “The Ministry of Tourism erred twice, first by giving permission and then by remaining quiet in an attempt to avoid responsibility, thus exposing Sama to bullying from social media activists.” Dwaik called Sama’s arrest “arbitrary” and characterized it as a strategy to quell public anger. A petition demanding Sama’s release garnered tens of thousands of signatures from around the world shortly after going online.

On December 27, a crowd of men from Jerusalem descended on the site, which is located between the Holy City and Jericho, and subsequently held prayers. They also destroyed much of the furniture from the hotel, which had recently been refurbished with a five million euro grant provided by the European Union to turn the Maqam into a Palestinian touristic attraction.

It took a week for the Palestinian government to publish the results of its investigation. The report laid equal blame on the Ministry of Awqaf (religious endowments), which owns the 6,000 square meter cultural site, on the Ministry of Tourism for granting permission and on Sama Abdulhadi for not being cognizant of the sacredness of the site. After eight days in detention and some 100,000 signatures from around the world, a Jericho judge agreed to release Sama on bail on the condition that she not travel abroad.

Upsetting to many was the intense bullying and intolerance for difference displayed by the protestors and by critics of Abdulhadi on social media. The mob-like bullying continued even after it became clear that this was not a Christian event, that it was carried out in the large courtyard of the compound rather than in the mosque, and that, contrary to earlier claims, there was no alcohol or immorality involved. The fact that Abdulhadi’s grandmother was a PLO leader who for decades headed the organization’s General Union of Palestinian Women did little to quell the anger and demands for punishment. The explanation by the government-sponsored committee that the goal was to promote live music in Palestine also did little to calm the rage expressed on social media and in the continued protests at the site.

Much of the anger came from young Jerusalemite men. Simon Azazian, publisher of the magazine Jerusalem Unites Us, rightly points out that Palestinian Jerusalemites have become polarized after decades of Israeli occupation and attempts to isolate them from the rest of Palestine, Some are assimilating into Israeli society while others are becoming hyper-religious and nationalistic. Sometimes the very same people shift from one cultural pole to the other.

The events surrounding the concert at the Maqam Nabi Musa compound encapsulated a major split within Palestinian society: On one side, Westernized partygoers gyrating to a techno beat, on the other, religious conservatives berating them for their immorality; on one side, a Ministry of Tourism hoping to attract Western visitors, on the other, defenders of the Maqam’s sacred status.

Social norms in Palestine are changing. People are increasingly less willing to accept “the other” and more willing to accept fake news as fact without further investigation. The incident also reflected the fragility of a Palestinian government that was unable or unwilling to take responsibility for its decision to allow the concert. Palestinian leadership failed in several ways. They unfairly scapegoated a musician and hesitated to admit that they had allowed a music concert at the location. Whether the leadership erred by giving permission in the first place is another question, one that, if posed to a group of Palestinians, would surely lead to a revealing debate about the state of their society.