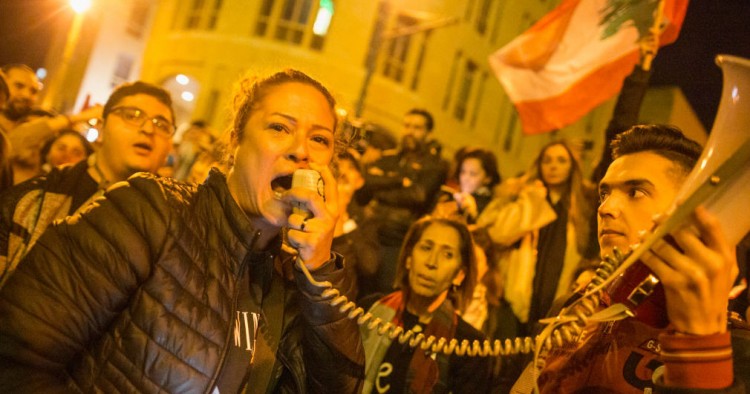 The Middle East has been plunged into turmoil. The killing of Iranian Major General Qassem Soleimani by the United States on Jan. 3 created a tense military and political situation in the region. In response, Tehran said it would abandon the 2015 accord under which it agreed to restrictions on its nuclear program and fired rockets at bases housing the U.S. military in Iraq. Washington has sent more troops to the region and imposed new economic sanctions on Iran. However, further escalation seems to have been avoided — at least so far.

Geopolitical crises such as the one between the United States and Iran are not new to the region — although they may vary in intensity. For decades, the Middle East has experienced tensions that have often culminated in wars, drawing in many parties from within and outside the region. But while the Middle East may have been largely shaped by geopolitics in the past, homegrown discontent of the type that bubbled up in 2011 and again in 2019 is likely to be the main determinant of conditions in the coming years.

The Arab spring that started in 2011, and the fall of dictators that ensued, led to renewed tensions, new proxy wars, and created failing states in the region — including Syria, Yemen, and Libya. The increased economic and political uncertainty that followed the 2011 Arab uprisings reduced the flow of foreign exchange to the region — whether from direct investment, aid, tourism, or remittances. The persistent fall in oil prices that started in 2014 resulted in a sustained reduction in the level of economic growth, adding to the tensions, despite inadequate attempts at economic reforms.

The fundamental dynamics of these economies — trapped in rentier models with entrenched private sector incumbents and an oversized state — have not changed. The economies remain sluggish, which has caused steady deterioration of living standards, especially among the middle class.

Now an already burdened region confronts a fresh set of protests — in Algeria, Egypt, Iraq, Kuwait, Lebanon, and Sudan — triggered largely by frustrated youth. The rising aspirations of relatively highly educated young people, many of them women who have attained higher educational levels than men, have collided with moribund economies that provide few good jobs.

But the discontent goes beyond the economy. Millennials in the region are learning from their peers in different countries and no longer are falling for the official rhetoric that says nations must choose between dictatorship and religious extremism. The focus of their frustration is firmly on governments — of which they have a profound distrust. The new generation is united against bad governance. The protests have been restrained and mature in the face of official intimidation — recognizing that they have been severely repressed in some countries.

These protests have contributed to a bottom-up renewal of societies in which top-down approaches have been the rule. That renewal is likely to have a lasting impact on these societies as more and more individuals discover they share both a distrust of states that govern poorly and opaquely and a constructive commitment to fixing the system. Social media has played a critical role by not only facilitating the expression of discontent, but also making it easier for protestors to organize. Moreover, a safety valve that authorities could rely on in the past to tamp down broad discontent no longer exists. Migration to Europe and the rest of the Western world has virtually ended — the result of growing populism and restrictive immigration policies. The lack of an exit ramp is likely to enhance the resolve of protestors.

But will these protests eventually transform the polity of their countries? So far, there seems to be little impact from the street protests on structural changes in political systems. The powers that be have so far resisted a true opening of the political arena to new voices that could force more accountability. The interplay between politics and economics might, however, offer some clue of what is to come. The region is in the middle of both political and economic transitions. Limited political openness mirrors the limited economic openness of many of the Middle East countries, where ownership structures are blurry. The barriers to firms entering or leaving key markets — as economists say, the lack of contestability — is at the core of the economic woes that long have plagued the region. In the past, societal peace was largely ensured by a social contract in which citizens tolerated a lack of political voice and an absence of government accountability in exchange for subsidies and public jobs. That social contract is being torn apart by empty government coffers and the coming of age of a new generation. The continued protests and the pressure they generate could help speed up significant economic opening and government accountability.

While geopolitical issues might temporarily derail the renewal of Middle Eastern societies, governments in the region are in protestors’ line of sight. The staying power of that new generation, coupled with the empty government coffers, suggest it will get harder and harder to contain the pressure from millions of educated and determined youth demanding a better future. Repression, the tactic governments used to rely on, might simply strengthen the conviction that governments are the root cause of their troubles and further their determination to change those governments. The ball is now in the governments’ court to ensure they gain new credence of accountability. Geopolitical developments will not derail the economic and political emancipation sought by protesters toward economic and political emancipation.

Rabah Arezki is the Chief Economist for Middle East and North Africa region at the World Bank Group. The views expressed in this article are his own.