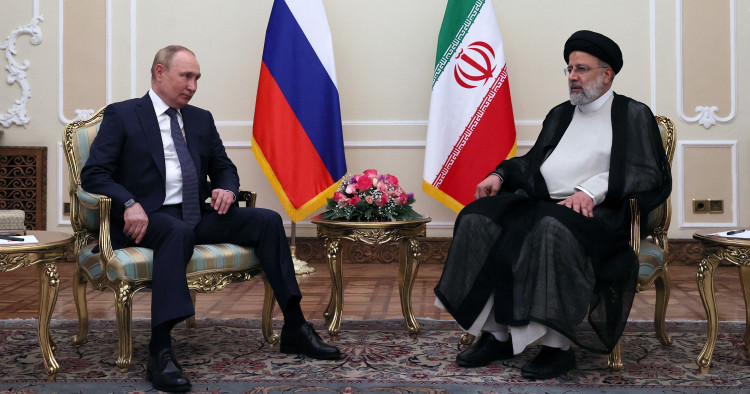 On July 19, Russian President Vladimir Putin paid an official visit to Tehran, where he met with his Iranian and Turkish counterparts as well as Iran’s supreme leader, Ayatollah Ali Khamenei. Although the official reason for Putin’s visit was to revive the “Astana peace process” on Syria, the trip will have important repercussions for the region’s evolving security environment as well as the trajectory of Iranian-Russian relations more specifically. In other words, the significance of the trip has less to do with the trilateral meeting between Iran, Russia, and Turkey and more with the deepening of ties between Moscow and Tehran.

Coming on the heels of U.S. President Joe Biden’s recent tour of the region, the Kremlin leader’s trip is the clearest sign yet of strategic polarization and a reemergence of the politics of spheres of influence in the Middle East. Today, Moscow and Tehran are ever more willing to work in tandem to frustrate the United States’ efforts to retain its leadership role in the region. In fact, Russia’s ambassador to Tehran suggested as much in a recent interview, stating that Iran and Russia have nearly identical views on a number of important strategic and normative issues, ranging from the ongoing conflicts in Ukraine and Syria to the legality of Western-led sanctions regimes to questions of human rights and homosexuality. This strategic convergence was on clear display at the Iranian-Russian-Turkish heads of state meeting on Syria, which otherwise failed to produce any meaningful breakthrough. Reluctant to sign off on a policy that would maintain Bashar al-Assad’s hold on power in Damascus, Turkey rejected Iranian and Russian warnings about the destabilizing consequences of a renewed Turkish military strike.

Bilaterally, Iran and Russia both expressed interest in expanding their banking and commercial relations, with a special focus on eliminating dollars from their mutual trade and establishing an alternative to the SWIFT inter-bank payment system. They are also equally keen on operationalizing the International North-South Transport Corridor (INSTC) because neither Tehran nor Moscow believe that their current stand-offs with the West are likely to conclude anytime soon.

Faced with a seemingly united front among key Western countries, Kremlin officials and, above all, President Putin himself are clear eyed about the long-term nature of their struggle with the West. As for the Iranian leadership, the recent June 2022 talks in Doha on Iran’s nuclear program have worn away most remaining hopes in Tehran that the Joint Comprehensive Plan of Action (JCPOA) might be revived and that the sanctions on Iran may be dropped. The Iranian side is additionally frustrated by the U.S.’s alleged inflexibility in the nuclear talks and its newly signed strategic agreement with Israel, which is predominantly aimed at curbing Iran’s nuclear activities. As such, the recent assertions by Kamal Kharzai, the former Iranian foreign minister and current head of its Strategic Council on Foreign Relations, about his country’s technical ability to produce nuclear weapons — even if it supposedly has no plans to do so — is best interpreted as both Iran’s attempt at deterrence against any potential U.S. and/or Israeli military action as well as Tehran’s tacit acceptance that the status quo of heavy sanctions will remain unchanged for the foreseeable future.

Given the above, Iran and Russia now have a mutual interest in pursuing measures or frameworks to reduce their susceptibility to Western-led financial sanctions, and this could help bring the two sides even closer together — not least because Moscow could immensely benefit from Tehran’s decade-long experience with sanctions busting activities. In fact, a number of high-level meetings already took place prior to Putin’s trip, whereby officials from the Iranian and Russian central banks explored alternative methods regarding financing and financial transactions. As expected, ruble-rial pair trading was listed by the Iran Currency Exchange on the day of Putin’s visit to the Iranian capital.

Due to their isolation on the world stage, Tehran and Moscow also share a common interest in accelerating the operationalization of the long-stalled INSTC. At a time when many countries are proving reluctant to trade with the duo, they nonetheless value the multi-modal north-south inter-regional transit corridor as a strong catalyst for economic growth and deeper commercial integration with India. To this end, it is telling that the first rail transit cargo from Russia to India entered Iran on July 12, a week prior to Putin’s arrival for the summit in Tehran. As part of their efforts to increase trade and cargo volumes along the corridor, Iran and Russia additionally reached an agreement to expand their maritime cooperation in the Caspian Sea, which would shorten the transit route from Russia to India. As the first step toward this objective, Iran Shipping Lines has allocated 300 containers to transport goods between Russia and India in the first phase of the project.

Besides commercial considerations, operationalizing the INSTC is also important because it provides a viable alternative to the Ankara-backed all-Turkic Zangezur corridor across the South Caucasus. Hence, progress on the INSTC enables Iran and Russia to limit Turkey’s fast-growing influence and presence in Central Asia and the South Caucasus region — a development that concerns both Moscow and Tehran given Turkey’s NATO membership as well as its renewed interest in transiting Turkmenistani gas via Azerbaijan. Indeed, Iran’s supreme leader was candid about his concerns regarding the prospect of a stronger presence of the North Atlantic Alliance along Iran’s northern borders during his recent meeting with visiting Kazakhstani President Kassym-Jomart Tokayev; and Khamenei reiterated this viewpoint in his face-to-face conversation with the Russian head of state. Russian commentators have similarly been warning about apparent revitalized pan-Turkic sentiments both inside the Russian Federation and in Central Asia for some time now.

Another important factor behind Moscow’s push for closer ties with Tehran lies in the Kremlin’s twofold concerns about Iran’s ability to undermine Russia’s strategy of energy pressure vis-à-vis Europe. On the one hand, Moscow worries that Central Asian states could either use Iranian territory or sign swap agreements with Tehran as they search for an alternative export route for their oil and natural gas exports to Europe. Unsettled by Russia’s renewed appetite for expansionism as well as Moscow’s attempt to halt the oil transit operations of the Caspian Pipeline Consortium, Kazakhstan has, for example, already begun courting Iran as a potential new energy partner. Nur-Sultan and Tehran signed a number of agreements, which include cooperation in the oil and gas sectors as well as industry, agriculture, and transit. By fomenting its strategic relations with Tehran and positioning itself as its main ally, therefore, Moscow will be in a better position to ensure that Iran does not potentially jeopardize Russia’s broader strategy of weaponizing its energy supply to Europe.

That said, Russia and Iran are natural competitors in the global hydrocarbon market; thus, Russian officials find the latter’s potential as a viable alternative supplier of energy to Europe problematic despite the underdeveloped state of Iran’s energy infrastructure, which makes such a scenario highly unlikely in the near term. Still, by having Russian Gazprom sign a $40 billion deal with the National Iranian Oil Company (NIOC) just hours prior to Putin’s landing in Tehran, Moscow has de facto become the leading investor in Iran’s energy market. Thus, Russia is now extremely well placed to influence the pace and scope of development in the Islamic Republic’s energy sector. In other words, the deal — the largest such energy agreement in Iran’s history — effectively enables Gazprom to exert direct control over the Middle Eastern country’s energy market; and Moscow will likely seek to exploit this leverage to ensure Iran is never in a position to challenge Russia’s global energy interests.

Notwithstanding the lack of official statements to this effect, it is nevertheless reasonable to expect a further deepening of defense and security ties between Iran and Moscow at a time when both seem eager to deflect any appearance of isolation on the world stage. While Tehran’s continued interest in acquiring Russian military hardware is well known, recent reports of Russia’s desire to procure Iranian combat drones for its war in Ukraine add a new dimension to the fast-evolving defense cooperation between Tehran and Moscow. The two sides may, in fact, harbor ambitions to co-develop weapons systems and boost the interoperability of their armed forces, which have been conducting more frequent joint exercises in the recent past. Equally significant in this context is Iran’s opening of a drone production factory in neighboring Tajikistan, potentially signifying the implementation of a joint armament initiative by Iran and Russia toward parts of Central Asia. Given Moscow’s key role as a security guarantor and actor in Tajikistan, where it has a relatively large and well-equipped military base, it is highly likely that Russia approved the Iranian move; thus, the site could well also be used for the production of the speculated drones earmarked for Russia.

All in all, Tehran and Moscow appear to be edging closer to the signing of a new and wide-ranging, long-term strategic partnership agreement that would cover and regulate their commercial, financial, diplomatic, and defense and security cooperation in Iran’s immediate neighborhood. For the Iranian regime, the pact would be seen as proof of Russia’s reliability as a strategic partner at a time when Tehran is worried about the prospect of a military partnership between Israel, the Arab Gulf states, and the U.S. It would also enable the mostly pro-Russia faction in Tehran, which includes President Ebrahim Raisi and his inner circle, to justify Iran’s ever-tightening relations with Russia — in spite of the two countries’ difficult history. For Russia, on the other hand, the pact would enable it to showcase its strategic worth to other regional actors, retain a degree of influence over the direction of regional affairs involving Iran, and, perhaps most importantly, lock in Tehran’s cooperation in, acquiescence to, and respect for Russian interests in Central Asia, the Middle East, and the South Caucasus.

Whether or how soon the two sides sign such an agreement is yet to be seen. The official line is that experts are still working on fine-tuning the details of Iran’s proposal, which was handed over to the Russian foreign ministry during President Raisi’s most recent trip to Moscow, in January of this year. However, Ayatollah Khamenei’s warm embrace of the Russian leader two weeks ago points to Tehran’s readiness to sign the deal; thus, it is seemingly the Kremlin that is holding back. This apparent hesitation may have several explanations, but a likely one is that Moscow seeks to use the strategic partnership document signing as a bargaining chip to extract more concessions from Tehran in the coming months.

Nima Khorrami is a research associate at the OSCE Academy in Bishkek and the Arctic Institute in Washington, DC. The views expressed in this piece are his own.