A recipe for intolerance: Iran’s blueprint for cracking down on Christians 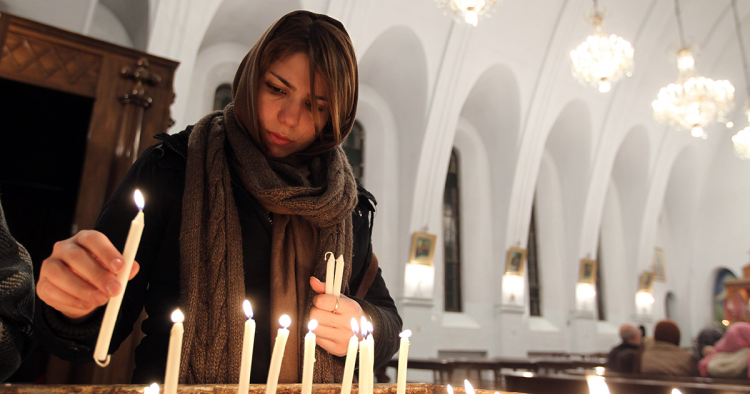 Every year at Christmas, Iranian regime figures line up to offer their best wishes to their Christian compatriots.

Such well-wishing is a well-established practice of the regime, dating back to founding father Ayatollah Ruhollah Khomenei, who, before he returned to Iran to usher in a new Islamic republic in 1979, made a series of promises that sounded very liberal, tolerant, and inclusive of people with varying opinions and beliefs. Khomenei talked about religious minorities and even communists — atheists in his view — and said that even they were free to express their views.

These promises were repeated by his successor, Ayatollah Ali Khamenei. But the reality of life for religious minorities in the Islamic Republic of Iran has proven very different, as many Iranians will attest, regardless of their political or religious viewpoints.

One recent illustration is the 80 lashes given to two Christian converts in the past two months for drinking wine as part of Holy Communion. One of these converts is currently serving a six-year prison sentence; the other is in internal exile, having already spent two years in prison. The charge against them? “Acting against national security by establishing house-churches and promoting ‘Zionist’ Christianity.”

In the regime’s eyes, these converts, and all others like them — a recent survey suggests there may be as many as 1 million — are no Christians. They are erring Muslims. So any punishment is justified.

And in spite of what regime figures like to say about the “tolerance” of the Islamic Republic, from the early days of the revolution — as soon as they were firmly in power — the ayatollahs began a crackdown on civil and religious liberties.

They started with the easiest targets at the time — the Jews, Western missionaries, and Baha’is — and then they began to include ordinary Christians and other religious minorities, as they sought to create a Shi’a hegemony.

They exercised their intolerance in a number of ways that could only be described as systematic persecution, depriving people of the five rights enshrined in Article 18 of the Universal Declaration of Human Rights, including the freedom to choose one’s religion, propagate it, and teach it to one’s children.

How did they do this?

First, they ensured religious minorities were separated from the rest of the world. They isolated them, and tried to destroy any semblance of unity among different religious groups, or even within a particular faith group or denomination.

For instance, there were times prior to the Islamic Revolution when Catholic, Orthodox, and Protestant Christians would come together on special occasions and display ecumenical relations. But in the immediate aftermath of the revolution, a chasm was created between those who complied with the government demands not to propagate their faith — and who could assist the Iranian regime in portraying a more tolerant view of things abroad — and those who were intent on sharing their faith with others, regardless of their religious background.

The missionaries were kicked out, and the indigenous believers were not free to meet or collaborate with their contemporaries outside the country on religious issues. For those from more institutional churches, like the Anglicans and Catholics, their contacts with the outside world, even if just in the context of church ecumenism, were monitored and viewed as highly suspect, as the Iranian regime still saw the West in general as “Christendom,” and their own country as the land of Islam.

The next tactic they used was to control the church’s expansion by not allowing non-compliant churches to build new churches, or at times even to repair existing ones.

Non-registration of properties and worship spaces was used as a threat to create instability and uncertainty. Some churches applied for registration from the Ministry of Interior, providing all the necessary documents, but years later they still did not receive formal recognition and registration, placing them constantly at risk of being labelled “illegal” and shut down, a tactic common in communist China and perhaps copied from there.

The third tactic was to criminalize evangelism, and this went far beyond street outreach. Churches that offered services in Persian, Iran’s national language, paid a heavy cost, as they resisted the call to cease these services.

“They banned us from teaching or praying in Persian at all,” Rev. Victor Bet-Tamraz told the author recently, having fled the country after being sentenced to 10 years in prison for continuing to hold Persian-language services in his home after he was banned from leading his church.

The next tactic was to suffocate the church by undermining leadership development. This was pursued through two means: one, forcing effective and experienced leaders, like Rev. Victor, out of the country, using the threat of long imprisonment or “accidents” to their family members. And, two, by shutting down Christian seminaries and ending opportunities for basic leadership training — from the raids on the Assemblies of God Central Church in Tehran, where they confiscated all the books available, to the personal archive of the pastors when their houses were raided, including Rev. Robert Assyrian. All their books were confiscated, and never returned.

The next step was to remove or obstruct Christians’ access to resources: confiscation of properties and anything related to their Christian activities — from a personal mobile phone, to a car that may have been used by a pastor to drive to meet his congregation, to homes purchased with the lifelong earnings of these families.

The fact that the Iranian authorities have arrested growing numbers of ordinary church members in addition to church leaders, especially over the past two decades, shows how desperate they are to maintain control and halt the growth of the house-church movement.

Many of those arrested report an array of tactics used to intimidate, threaten, and manipulate them, ranging from psychological torture to physical and sexual abuse.

Meanwhile, every year there seem to be an increasing number of people sentenced to prison and exile, and the Iranian judicial authorities make no secret that it's because they interpret their peaceful religious activities as a threat to the regime’s stability and the country’s national security. A decade ago, in October 2010, Khamenei specifically mentioned house-churches among the “critical threats” facing the Islamic Republic.

And all the while, the regime prepares public opinion to accept the state’s intolerant actions through propaganda and psychological warfare, using all platforms available — from state media, to mosques and numerous state-run social media accounts. Their aim is to dehumanize the Christian community and use language and messaging that will desensitize the Iranian public to the criminal and unjust actions taken against them.

After a wave of arrests in the wake of Khamenei’s 2010 speech, the Tehran governor at the time, Morteza Tamadon, described the rise of evangelical Christianity in Iran as akin to the arrival of a new “parasite.”

This and many other similar comments were used to portray Christians who were non-compliant with the regime as “sectarians,” “agents of the imperialists,” and “Zionists” — something they frequently evoke.

When a Christian retreat center outside Tehran was confiscated in 2018, for example, the Assemblies of God denomination that owned the building was demonized and accused of being “funded by the USA and CIA spy agency to infiltrate the countries of the Islamic world.”

How should the West respond?

While the international community tries to maintain a good relationship with Iran because of its geopolitical importance and wealth of natural resources, the West needs to go beyond lip service and make discussions around improvement of human rights an integral part of foreign policy and diplomatic relations with Tehran.

The Iranian regime should know that, for its survival, it must comply with the human rights enshrined in the international conventions to which it is a signatory. We cannot hope for any change in the regime’s behavior, policies, or attitude unless it becomes costly for them.

The Iranian government must know that if they continue to behave the way they are right now, they will be isolated, their leaders will be sanctioned, their access to the international market and resources will be limited, their reputation will be further damaged, and they will face legal consequences for their actions — and a taste of their own medicine.

Mansour Borji is the advocacy director of Article18, which aims to support Iran’s persecuted Christians through documentation, advocacy, research, training, and support. The views expressed in this piece are his own.