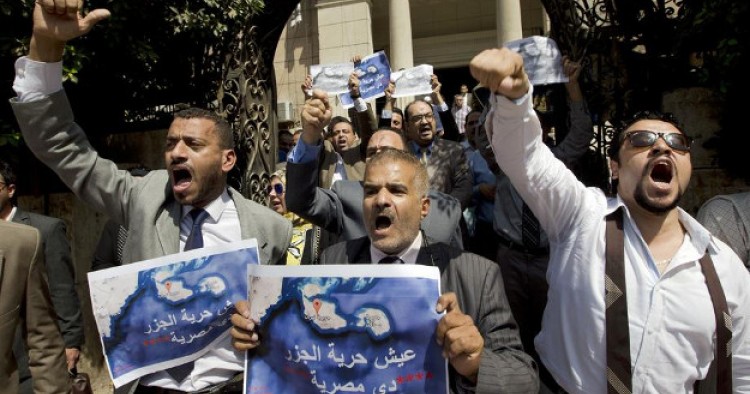 The Saudi-led Arab Peace Initiative is losing its value in the wake of Egypt’s decision to return the Red Sea islands of Tiran and Sanafir to Saudi Arabia, and the latter’s participation as a security guarantor of the Egypt-Israel peace treaty.

Most attention has focused on the dispute over sovereignty, which has been under Egyptian administration for more than half a century. But the real significance of the deal lies elsewhere.

Far more important than whether a handful of Saudi or Egyptian police patrol the unpopulated islands is the unprecedented Saudi written pledge to participate as a party, along with Egypt, Israel, and the United States, in upholding the security terms of the historic peace treaty between Israel and Egypt.

The story was far different in April 1979 when Egyptian President Anwar Sadat initialed the agreement alongside Israel’s Prime Minister Menachem Begin and a beaming U.S. President Jimmy Carter. Egypt was shunned by the Arab League, including Riyadh, for its decision to break with the Arab consensus on Israel declared at the Khartoum Summit after the Arab defeat in the June 1967 war—No Recognition, No Peace, No Negotiations.

The Saudi position on relations with Israel was subsequently detailed in a series of plans, beginning with the King Fahd Plan of 1981, and most recently reiterated in the rebranded Arab Peace Initiative (A.P.I.) at the Arab summit in Amman in April.

Israel has studiously ignored the Saudi-led Arab demarche. Former Prime Minister Ehud Olmert once boasted that he had not even bothered to read it. Paying hard territorial currency for what Israel has always considered the dubious advantages of peace is an equation that has never carried much weight in Tel Aviv. The Saudi-Egyptian agreement on Tiran and Sanafir suggests that, as with Egypt almost four decades ago, Israel’s “Iron Wall” strategy has once again paid off.

Although formally the agreement is bilateral, both the United States and Israel are not-so-silent partners. That’s because the Israel-Egypt peace treaty includes Egyptian and American security commitments concerning the two islands, which guard the approaches to the Gulf of Aqaba, a vital economic and maritime security waterway for Israel. Without Israeli and American approval, the deal to return the islands to Saudi Arabia was simply a nonstarter.

Israel is said not to have negotiated directly with Riyadh the latter’s agreement to assume Egypt’s security responsibilities under the treaty, relying instead on Egyptian and American good offices. For Israel, a direct dialogue would be a real achievement, but if it stands in the way of effective diplomacy, it’s an unnecessary distraction. Washington and Cairo stepped in to win a Saudi commitment to assume relevant Egyptian security commitments, including hosting continued deployment of the U.S.-led Multinational Force and Observers on Tiran and, other than a small detachment of civil police, not to station its own forces there.

On December 18, 2016, Egypt informed Israel of the Saudi agreement to abide by the terms of the peace treaty, including maps that defined the agreed-upon maritime borders between Egypt and Saudi Arabia. One day later, Netanyahu responded, approving the deal, including maps detailing the maritime agreement, the provisions for the M.F.O., and grandiose plans for the King Salman Bridge, linking Sinai to the Saudi mainland.

While acknowledging these material changes to the Israel-Egypt treaty, Netanyahu wrote that, “these procedures do not represent any violation of the peace agreement between Egypt and Israel.”

The same diplomatic sleight of hand has allowed Egypt to deploy military forces against a persistent jihadi insurgency in the Sinai, including F-15s and tanks otherwise prohibited by the treaty. According to Israel’s ministry of justice, "the peace treaty between Israel and Egypt, including its appendixes, has not been opened. To our understanding, as part of the agreement between Egypt and Saudi Arabia there are arrangements meant to ensure no violation is made and the continued application of the existing arrangements and commitments in the peace treaty between Israel and Egypt, as it relates to the two islands….”

Moshe Ya’alon, Israel’s minister of security at the time, noted that Riyadh provided written assurances that the kingdom will guarantee Israel freedom of passage in the Straits of Tiran. It will be remembered that Gamal Abdel Nasser’s decision to blockade passage to Eilat via the Straits of Tiran was one of the precipitating factors of the June 1967 war.

It is hardly surprising then that the A.P.I. has hardly featured in the recent Saudi diplomatic agenda. President Donald Trump made no reference to it in his May speech during a visit to the kingdom. And the most recent G.C.C. summit was likewise silent on the topic.

It is true that Saudi and Israeli attention is focused elsewhere. As Netanyahu confidant MK Tzachi Hanegbi observed, Israel “ha[s] an interest in expanding the cooperation in the Sunni axis, which is struggling against the radical axis headed by Iran.”

But there is a broader, and in some respects more significant, factor at work. Conditioning relations with Israel on its readiness to enable Palestinian sovereignty has been at the heart of the declared Arab strategy concerning Israel for decades. The E.U. too in recent years has sought to impose costs upon Israel, both commercial and diplomatic, for its continuing occupation, which Netanyahu has decried.

Israel has fought such a strategy with great success. It has powerful allies in Washington, New Delhi, and Beijing that reject conditioning relations on a change in Israel’s occupation and settlement policies. Sadat blazed this trail among the Arabs, followed by the P.L.O. and Jordan. Saudi patronage of the A.P.I. was aimed at restoring the diplomatic utility of this equation.

But why should Israel bother to seriously consider the A.P.I. when critical security advantages promised in the Saudi peace proposal have already been granted by Riyadh without Israeli concessions on Palestine? Riyadh’s interest in reasserting control over the Red Sea islands, part of a grander strategic reorientation, and its willingness to partner in the security provisions of Egypt’s treaty with Israel, have dealt the A.P.I a body blow.