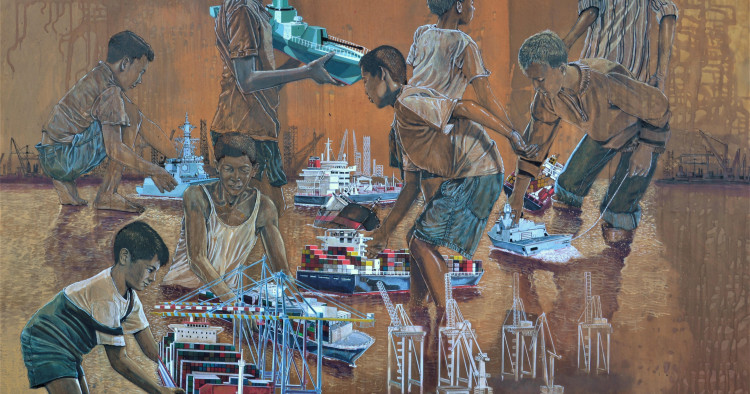 In 2020, the 14th edition of Art Dubai went completely online due to the coronavirus outbreak, with programming focused on performance art and healing curated by Marina Fokidis, a live broadcast of the Global Art Forum, and a digital catalogue. “We didn’t have a model to follow,” Pablo del Val, Art Dubai’s Artistic Director explained. “The online viewing rooms came later and the art industry has shifted to make these platforms meaningful. The future was unknown so we worked blindly.”

The present, arguably, is no more certain. After an aggressive summer 2020 lockdown and a spike of coronavirus cases in the winter, Dubai has reopened as part of the government’s efforts to spur the trade and tourism that fuel its ailing economy, with speedy vaccine rollouts and approximately half the UAE’s population immunized. It’s no surprise then that Art Dubai 2021 focused its showcase around the theme of physical presence, with safety measures in place. The only digital aspect of the fair, which took place from March 29 through April 4, was an app that featured a reservation portal to book a time slot for art viewing, in addition to the option for remote participation for the gallerists who couldn’t attend.

But it was still a gamble. “We didn’t know how the crowd would move,” del Val continued, but by all accounts, the fair was a controlled affair. There were 40% fewer galleries this year (50 instead of the usual 90) from 31 countries, including Saudi Arabia, Lebanon, Turkey, Iran, India, Vietnam, and the Philippines as well strong representation from across the African continent. Attendees numbered 18,000 (2019 saw 28,000), with over 850 international guests attending the fair. According to International Director Chloe Vaitsou, the largest contingents came from Egypt, Spain, and Belgium. She further explained that, due to country-specific travel regulations, there was a notable absence of institutional groups from Europe and the U.S., but individual patrons did attend.

All of the events were held in the purpose-built venue at the commercial hub of Dubai International Financial Center (DIFC). At the DIFC, a sculpture park was erected along the edges of the Gate Building’s water paths and a film program was installed along Gate Avenue, the indoor promenade leading to the fair. These installations expanded the fair beyond its three tents, although the team had to scrap the original idea of activating parts of the city through artists. “We had wanted Dubai to function as a backstage of sorts, breaking the traditional format of art lectures or presentations. We envisioned an artist’s dinner which would auction people's dreams and a visit to the World Islands. The idea was to get to know artists differently, in smaller groups, rather than just scattering their works across the city,” del Val added.

“The picture of Dubai today is not the same as it was 15 years ago. For the next edition, we need to consider the Sharjah Biennial and EXPO 2020, and complement their programming rather than overshadow it, looking at how we can activate third-party sites like Jameel Arts Centre and Warehouse 421.” This represents a shift in Art Dubai’s thinking beyond the fair, which, as an engine for the art market, plays a role in recontextualizing the understanding of the Middle East, North Africa, and South Asia region and its plural voices. “Art Dubai was always an important playground in which to develop relationships with the outside,” said Hala Khayat, Art Dubai’s new regional director. “Art Dubai introduced me to international art, while focusing on the Global South and artists not represented in the West.” Khayat is part of the Art Dubai team that in partnership with the Dubai Culture & Arts Authority launched in October the first institutional art collection for the city, the Dubai Collection. Based on a public/private partnership model, it aims to foster a collecting culture that leverages the city’s cosmopolitanism, while drawing in works locally and building an online archive.

“Dubai doesn’t have an art museum and, for the first time, Sheikh Mohammed bin Rashid al-Maktoum’s collection will be displayed publicly in a digital museum, built by both new acquisitions and loaned works. This is not a new idea in that, historically, Western museums were initiated by collectors and patrons donating works, but we are looking to curate the collection in temporary exhibitions through a rotating committee,” Khayat said.

This collaborative form of patronage evidences a rethinking of the art industry, which was reflected in the way Art Dubai prompted gallery participation this year through profit-sharing. “It was more like a joint venture,” explained del Val, “we were working for the same objective, like a unit.” For the revised 2021 edition of Art Dubai, the fair offered galleries a model in which they paid no stand fee prior to the fair and the full fee was based on success — calculated as 50% of sales made at Art Dubai or directly because of Art Dubai — capped at the cost of the stand. For the galleries that chose not to participate in the 2021 fair, they were given the option of rolling over their credit to the 2022 edition of Art Dubai, since in 2020 they had advanced 50% of the rental cost of their booth for the cancelled fair.

“Rather than just a passive space that is rented, we are building partnerships with the galleries,” del Val said. Such agility in response from last year to this one has borne results, with total sales at about $4 million — so far over 95% of the galleries have met their booth fee. “Although not without its risks, we were always determined to go ahead as our community of collectors and supporters wanted to help provide sources of revenue to arts and culture businesses,” added Art Dubai Executive Director Benedetta Ghione.

Galleries from the wider region seemed content. According to Hormoz Hematian, founder of edgy Tehran-based Dastan’s Basement, “The city and the fair feel like a second home base for us, so being part of this edition of Art Dubai since COVID was really important to us despite the many difficulties we faced.” The gallery, which is well known for its boundary-pushing booths, has recently split into three autonomous programs including +2 and Parallel Circuit. Dastan’s Basement placed their works within private collections from the region, while +2 sold the works of Fereydoun Ave and Andisheh Avini for under $60,000.

Amongst the reported sales of international artists were two works by Ian Davenport in the price range of $120,000-150,000 at Custot Gallery and JR’s JR at the Louvre and the Secret of the Great Pyramid, reflecting the transformation of the Musée du Louvre in Paris, which sold for $65,000 to a local collector. One of the strongest new presentations was by Comptoir des Mines from Morocco, which sold a sculptural work by Fatiha Zemmouri for $32,000, among others. On the local front, Leila Heller sold five impressionistic works of the Aug. 4, 2020 Beirut blast by Lebanese artist Marwan Sahmarani, and Lawrie Shabibi sold five works by Mohamed Ahmed Ibrahim, a pioneering Emirati land artist.

There were major compromises on programming this year, such the cancellation of the Global Art Forum, which has long been the intellectual arm of Art Dubai, featuring artists and thought leaders around contemporary issues. But as one of the forerunners of in-person fairs this year, Art Dubai has witnessed an expanding audience, according to Vaitsou. “There is increasing interest by European, South Asian, and expat communities across the Gulf in emerging art from across the Middle East. A year proliferated by online shows and sales saw new entrant buyers from different parts of the world and across come into the market.” “In addition, increasing appetite among institutional and corporate collecting entities are all health indicators of a diversifying and maturing landscape, such as the Dubai Collection, launched this year in Dubai, and institutions such as Jameel Arts Center contributing to this phenomenon in Dubai alone.”

The past pandemic-ridden year has evidenced new collaborative models of survival. In Dubai, Art Dubai is spearheading alternative forms of profit-sharing, based on an understanding of the fair as a supportive part of a complex cultural geography in a city with a rapidly evolving arts infrastructure.

Nadine Khalil is an independent arts writers, researcher, curator, and content specialist. The opinions expressed in this piece are her own.

The Abraham Accords one year on