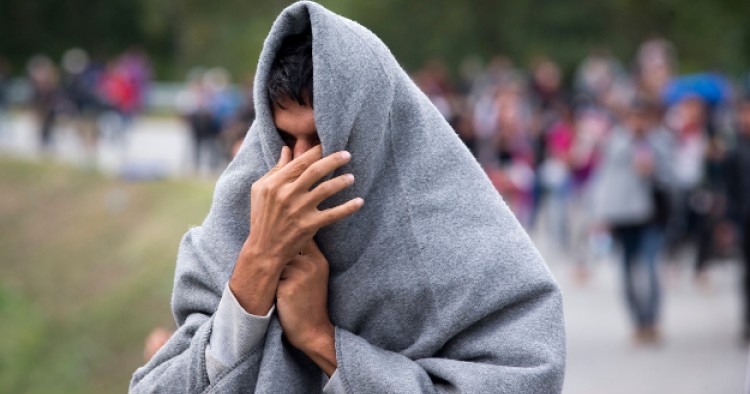 A casual, short visit to Stockholm may not yield any eye-opening revelations. The mood is as tranquil as ever—the trendy restaurants and bars occupy every neighborhood in the center, and the grandeur of its dazzling, opulent architecture blinds the eye from noticing the Roma beggars scattered across the city.

Dig deeper though and the refugee issue begins to surface: in the straying young men struggling to make sense of their new home; in the frequent anti-Assad protests; and in the incessant chatter about refugees' right and the alarming rise of the far-right, anti-immigrant Sweden Democrats—now the third largest political party in Sweden.

It was no surprise, thus, for the refugee issue to dominate the 17th edition of the Tempo Documentary Fest, Sweden's largest non-fiction film festival (March 7-13). Boasting a rich and eclectic lineup containing world premieres Golden Girl and Revolution Poetry, alongside some of the biggest documentary hits of the past 12 months—I.D.F.A. winner Don Juan, the Janis Joplin biopic Janis: Little Girl Blue, the Sundance sensation Sonita—the 2016 Tempo edition was nonetheless distinguished for a palpable focus on migrant issues; a subject rapidly growing to be the dominant theme in world documentary filmmaking.

Sweden’s efforts in combating racism, sexism, and social injustice has become a model not only for its neighboring countries, but for the whole of Europe and America. In cinema, Sweden became the first country on earth to enforce equal gender funding for all productions, while cinemas across the nation have added a new rating system based on the Bechdel Test to further promote the necessity of gender equality in movies.

A new test for detecting racism in film is coming into play at a time when the refugee crisis is spilling from the news media onto high and popular cultures. After taking in more than 200,000 Syrian refugees last year, voices from the far-right have raised concerns about the economic and social impact the new migrants may have on the small Scandinavian state, encouraging measures that could lead to the expulsion of up to 80,000 refugees.

Tempo's decision to shed light on the different aspects of the crisis is therefore not only an apt programming decision, but a commendable endeavor to humanize a tragedy in face of the growing anti-refugee sentiment spreading across Europe.

A highlight of this year's selection was Marianna Economou's The Longest Run, a fact-of-the-matter chronicle of two teenagers from Iraq and Syria who get duped by human traffickers and ends up trapped in a Greek prison. Refraining from easy sentimentality, the director paints a stark portrait of two young lives annihilated by a merciless, blind system no less just than the one they faced at home. The Greek, and to a larger extent Europe, legal system is put under scrutiny as Economou elucidates the devastating consequences on illegal migrants after running away. Stranded between the devil and the deep blue sea, the two protagonists of this remarkable Greek production are the norm, and not the exception.

At the polar opposite is Carl Moberg's Sounds of Exile, a musical document of three different immigrant musicians—two Iraqis and a Congolese—attempting to deal with their pasts through music. The film is both a compassionate character study of three souls struggling to carve new identities for themselves and a colorful portrait of Malmö, a city that's rapidly becoming a melting pot of different ethnicities and cultures. At a time when multiculturalism is repeatedly questioned, Moberg presents a heterogeneous industrial city made richer with the settlements of the new immigrants.

"I think the main reason why I made Sounds of Exile is because I realized that many immigrants have gone through things we can barely imagine" Moberg told me. "We live together, natives and immigrants, and we are so much alike but our experiences are often so different."

The most urgent strand of the fest was a short film program, titled Borders, which explores the plight of different refugees in Europe.

"I was very upset when Sweden decided to close its borders earlier this year," Tempo's Head Programmer Melissa Lindgren said. "The lack of humanity and compassion that Europe is showing is despicable to me.”

The idea was born, Lindgren added, after she saw Frans Hutha Karlsson’s Before Our Eyes, which became one of the program's films.

“The film portrays Syrian refugees traveling through Europe juxtaposed with a speech by Sweden's prime minister about opening our hearts for those in need. It was so absurd to hear that speech again knowing that three months later, the Swedish borders would be completely closed. I wanted to curate a program following the journey from the homeland to the new country, shining a light on how diffuse and often absurd the construction of borders is," she elaborated.

The stories of the program vary in approach, point of view, aesthetics and tone. In Eline Helena Schellekens's Home for Lydia, a little African girl conveys the distress of continuous relocation in her adopted Netherlands home via jubilant musical vignettes; in Eloy Domínguez Serén's Yellow Brick Road, two little boys at the Sahrawi refugee camps in Tindouf, Algeria, mess around in front of the camera before taking the helm to control their own representation.

Seventeen-year-old Syrian refugee Khaldiya Jibawi uses the camera to reflect on her maturation at the Zaatari refugee camp in Jordan in Another Kind of Girl; director Guido Hendrikx charts the training process of novice Dutch border patrol in charge of executing the eviction of asylum seekers in Escort; while the aforementioned Before Our Eyes soberly captures in harrowing detail the struggle of dozens Syrian refugees marooned in a purgatory-like Hungary as they await sluggish European leaders to decide their fates.

Collectively, these films offer a multi-layered look at a calamity that transcends Syria. Each film does not only offer the viewers a chance to contemplate the issue away from the standardized, lifeless stories the news media are stuffed with, but to understand and empathize with the subjects in discussion.

"It was important for me to talk about Syria in other terms than just war, destruction and terror," Broos said." Morten Harket was surprised. He had no idea about Syria back then or that there were people listening to their music. And then I thought about why I was surprised and how easy it is to make quick judgments or to have an idea about what the world looks like that you get from media. How little we actually know about each other and that despite our different cultural background and context there is so much that unites us."

"We get stories and facts from media, we read sometimes about refugees as 'a group', 'a mass,’" Broos added. "I think it´s very dangerous when we start to talk about human beings in masses or volumes; When we don´t see each individual or recognize refugees as ordinary people."

The initial productions dealing with the refugee are all earnest attempts to put a face to this crisis. They’re entry points to a compound, thorny issue audiences of the world are yet to grasp. These films shall pave the way for more complex stories to be told; stories that will enlighten, provoke and unravel startling truths hidden behind the thick guise of this indeterminate present history.