Responding to the Rohingya Crisis: Toward Human-Centered Accountability 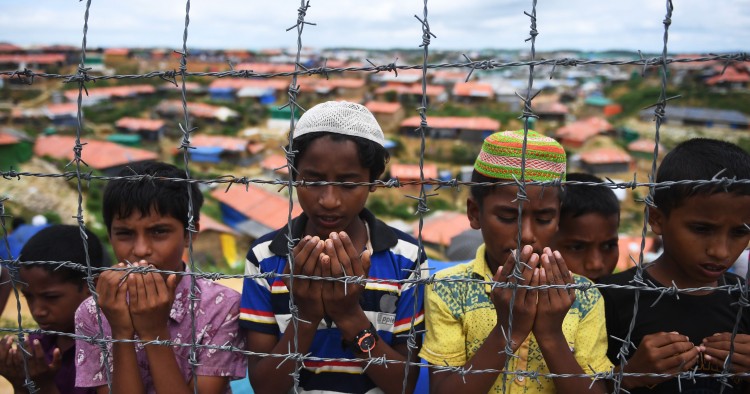 I have asked every Rohingya survivor I have met what it is that s/he wants. All of them identified accountability and justice as a key priority. Many have indicated that accountability is their number one concern — a common priority of victims or survivors of mass atrocity crimes. However, although official accountability processes honor the idea of accountability, they often fall far short of rendering satisfactory justice to survivors.

The structure and proceedings of the joint UN/Cambodian government-run Khmer Rouge tribunal — known as the Extraordinary Chambers in the Courts of Cambodia (ECCC) — illustrate some of the shortcomings and limitations of official accountability processes. The lessons derived from the Cambodia experience argue strongly in favor of a human-centered approach to accountability for Rohingya and for victims/survivors of other atrocities.

The Idea of Accountability

Proponents of a rights-based approach argue that major perpetrators of atrocities must be held legally accountable if a country is to transition to a society that respects the rule of law.[1] Others dispute the beneficial impacts of trials and argue instead that striking Faustian bargains (e.g., offering conditional amnesties) offer a better prospect for peace and development of the rule of law.[2]

International and local leaders have many goals in mind when pursuing accountability for the commission of atrocities, including justice, truth, prevention and deterrence, reconciliation, and capacity-building.[3] No single mechanism or approach can satisfy all of them. Furthermore, international actors have their own priorities.

Mallinder and McEvoy identify four common characteristics in the operationalization of the notion of accountability: 1) an individual or institution that is capable of being held to account; 2) an individual or institution that is empowered to hold the decision-maker accountable; 3) a process by which the decision-maker is required to disclose and explain their decision; and 4) an enforcement process.[4]

A victim- or survivor-centered approach to accountability prioritizes the needs of those who have experienced harm, and gives them a voice at every stage of the process. It puts victim/survivors’ sensibilities at the center of the process.[5] However, as Robins demonstrates, the core mechanisms of transitional justice (e.g., trials, truth commissions, etc.), as currently designed, do not necessarily meet victim/survivors’ needs.[6]

Lessons from the Cambodia Experience

Strikingly, the study also revealed a significant drop over time in Cambodians’ interest in the accountability process, that is, in the joint UN/Cambodian government-run Khmer Rouge tribunal known as the Extraordinary Chambers in the Courts of Cambodia (ECCC). While most of those interviewed for the study remained theoretically supportive of the process overall, they also criticized it as politicized, corrupt, and slow. More importantly, they were ignorant of what the process involved and indifferent to it anyway.

Cambodians’ lukewarm indifference to the Khmer Rouge tribunal, and its seeming irrelevance to them, stems from the following:

In Cambodia, Khmer Rouge victims/survivors frequently praised the many informal or “shadow” civil society initiatives that have been created alongside the official accountability process, filling in gaps or addressing shortcomings in that process.[8] Indeed, respondents to the Open Society survey reserved most praise for accountability initiatives championed by civil society rather than the official process, notably mental health support services and memorializing efforts.

In contemplating what accountability mechanism might best serve Rohingya victims/survivors over the long term, it is worth drawing from the lessons of past experiences, such as the case of Cambodia.

The first lesson is that we need to manage expectations from the start.

Arguably what most victims ultimately want is to be made whole again, as if they had never been violated. Unfortunately, accountability cannot do this; nothing can. This needs to be accepted upfront or no accountability process will ever have a chance of being satisfying to survivors.

Beyond this, what expectations will need to be managed will depend on each context. Some of the features of the Khmer Rouge tribunal that have disappointed survivors are that it:

Indeed, where compensation can be offered, for instance through the International Criminal Court, the money does not come out of perpetrators’ pockets anyway but from a trust fund funded by the States Parties to the ICC. So, if part of the motivation for compensation is to punish perpetrators economically, accountability may disappoint.

Survivors also hope to put senior leaders or those most responsible on trial to assess their individual criminal responsibility, to extract a direct apology or an explanation for what happened, and/or to secure a jail sentence.

This requires leaders to be physically involved in the process, meaning they need to either cooperate or be arrested. This is the opposite of what happened with the Permanent Peoples’ Tribunal on Myanmar, where the government ignored the invitation to participate, could not be compelled to do so, and no defense was presented.

To fulfill this physical presence requirement, regime change, if not a total geopolitical shift, would likely need to occur, so that the alleged perpetrators are more vulnerable. In the Cambodia case, this is one of the reasons why the accountability process took so long to get underway.

If the hope is to have an official institution make a determination about the occurrence of mass atrocity crimes, it must be understood that this may result in politically compromised outcomes, depending on the positions of the relevant political powers. In Cambodia, this has meant that there is an effective ban on summoning for testimony the most important witnesses — former senior Khmer Rouge who are currently top civilian and military officials.

The geopolitical perspective also gets sidelined in the Cambodia process, which only takes a limited look at the roles other countries played in what happened. This means that the truth that is uncovered is incomplete in significant ways.

One final example of managed expectations is for an accountability process to enable survivors to tell their own stories. In the Cambodia tribunal, as in many others, survivor stories are primarily relayed in an adversarial question-answer format through examination-in-chief and cross-examination.

However, this approach frequently results in piecemeal storytelling, with the narrative being driven by the questioner, not the survivor; and the focus on whatever the questioner needs to prove rather than the experiences that may matter most to the survivor. It is usually also a linear approach to narrative and memory which is not necessarily compatible with Asian storytelling, or with the way victim memories work.

Furthermore, all of this unfolds in a giant fishbowl of a courtroom, with bright lights, video cameras, dozens of courtroom observers outfitted in robes and suits and hundreds more in the public gallery. Hearings are reported in the media and sometimes broadcast on TV and radio.

In short, this type of proceeding is incredibly intimidating, especially for people who are unfamiliar with such an environment, who may not have been prepared in advance, and who are brought in to testify about highly sensitive or traumatic events, for instance personal accounts of gender-based violence.

The second lesson we can draw from past experiences is that we must continually disseminate as much information as we can about accountability.

Taking steps to ensure the wide dissemination of information is the only way to overcome ignorance of the process and a vital means by which to avoid the kind of indifference to the process as seen in Cambodia.

In promoting access to information, we need to push back against the paternalistic idea that since some survivors do not have formal education qualifications, they would be incapable of understanding the information and thus need to be told what to think rather than be given the space and resources to decide on their own.

Survivors have the most important qualification to participate in accountability processes: it is they who experienced the very events over which we seek accountability. As much as some of our colleagues may think otherwise, this is far more important than academic degrees, ability to use big words, and fancy job titles.

It is incumbent on those who serve as “carriers” of relevant information to adapt its delivery to survivors’ needs.

A final lesson we can learn is that survivors such as the Rohingya must truly be driving any accountability process for it to succeed.

It is not appropriate simply to ask a few Rohingya leaders to endorse accountability options placed before them, to determine on their behalf how accountability for their suffering should be pursued. Nor is it appropriate that a handful of Rohingya community leaders alone  participate in making that determination. Rohingya women and children have experienced crimes in a unique way, and are the ones best placed to ensure that accountability appropriately and adequately addresses their needs.

[5] Simon Robins, Families of the Missing: A Test for Contemporary Approaches to Transitional Justice (London: Routledge, 2013) 2–4.

[6] Simon Robins, “Failing Victims? The Limits of Transitional Justice in Addressing the Needs of Victims of Violations,” Human Rights and International Legal Discourse 11, 1 (2017): 41-58.

[7] See Open Society Justice Initiative, “Reconstruction and Healing: The Impact of the ECCC on Ordinary Cambodians,” Performance and Perception The Impact of the Extraordinary Chambers in the Courts of Cambodia (2016): 71-96, https://www.justiceinitiative.org/uploads/106d6a5a-c109-4952-a4e8-7097f8e0b452/performance-perception-eccc-20160211.pdf.