Reverse Moralism and the Response to the Syrian Refugee Crisis 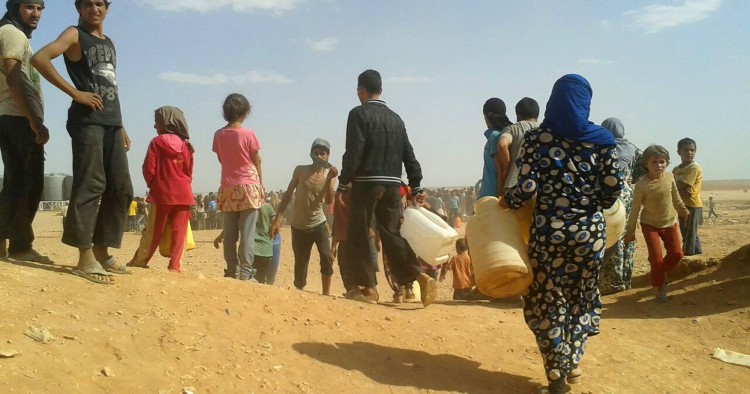 Anyone who works on issues related to refugees and forced displacement in the Middle East has at least once experienced what could be called “reverse moralism.” A year ago, a journalist interviewed King Abdullah II of Jordan. During the conversation, she raised a question concerning the situation of 16,000 Syrians stranded in the border area of Rukban into an informal camp with minimal access to humanitarian aid. The king responded that, “If you want to take the moral high ground on this issue, we’ll get them all to an airbase and we’re more than happy to relocate them to your country.”[1] The journalist moved on to the next question.

In Rukban today there are about 70,000 Syrians stranded whose situation is worsening.[2] This is reverse moralism in action. As a European scholar meeting with policymakers and practitioners involved in the response to the Syrian refugee crisis in the Middle East, I could provide several similar examples.

To be sure, accusations of double standards are not new in Middle Eastern criticism of Western approaches to the region — and are often well-deserved. But in this case, we are not talking solely of allegations of doubles standards. Reverse moralism relies not only on the idea that moral standards (i.e., human rights, humanitarianism, etc.) typically — if approximately — associated with Western political culture, are applied selectively. The cases are steadily accumulating: the Guantanamo Bay, Cuba detention camp; the Abu Ghraib prison in Iraq; U.S. President Donald Trump’s “Muslim Ban”; European states’ deficient responses to migration flows; and lately, British Prime Minister Theresa May’s stance of prioritizing strict security measures over human rights principles are only some examples. Taken together, these cases illustrate that many Western states are competing with populist movements in a race to the moral bottom, thereby providing scope for refugee host countries in the Middle East to fend off criticism for some of their own failings.

Jordan is host to more than 650,000 Syrian refugees.[3] Jordanian official sources claim that an equivalent number of non-refugee Syrians reside in the country. In a recent interview, Queen Rania of Jordan has asked “If my husband closed the borders, how would we sleep at night?”[4] The Jordanian government is proud of its hospitable stance to Syrian refugees.

Yet, since December 2016, the record of refugees being forcibly repatriated from Jordan to Syria has been increasingly significant. Already after the attack that killed seven Jordanian troops in Rukban in June 2016, many Syrians (exact figures are unknown) have been repatriated on the grounds that they pose potential security problems, while the border has been declared a military zone and closed.[5]

Since then, forced returns have picked up again. An anonymous diplomatic source indicates that in December 2017 alone, more than a thousand Syrians were forcibly returned to their country in the aftermath of the Karak terrorist attack — an attack claimed by IS and carried out by Jordanian nationals. From January to April 2017, the data indicate similar, though a slowly decreasing number of deportations. The U.N. High Commissioner for Refugees (UNHCR) reported that as of April 2017 more than 4,100 Syrians have been forcibly returned to Syria.[6]

Non-refoulement is a well-recognized principle of customary international law that forbids the forced deportation of refugees and asylum seekers to their country of origin. Being thus enshrined in customary international law, the principle applies to Jordan notwithstanding the fact that is not a party to the 1951 Refugee Convention. Furthermore, Jordan is a party to the Convention against Torture and the International Convention on Civil and Political Rights, both of which prohibition of forcible repatriation. There are derogations to non-refoulement, for example in cases in which national security is concerned, when a refugee is involved in serious criminal activity or when his or her past activities are characterised by criminal conduct.

The UNHCR seems to rely on a distinction between “refoulement” and “forced return”; the former concerning refugees and asylum seekers (that is individuals who have previously sought protection under UNHCR), the latter relating to the forced repatriation of individuals that do not necessarily enjoy asylum status in Jordan. Both categories are entitled to protection, but those who have not previously registered with UNHCR are harder cases to defend against repatriation, and their situation raises particular concern among human rights organizations.[7]

Jordan's process of deportation is opaque, rendering it difficult to assess the practice's magnitude, legitimacy, and causes. UNHCR sources report that only some, probably few, of the actual cases that are subject to return to Syria have been communicated. A source in the humanitarian sector explained that “[sometimes] government, or family members, or an NGO, or someone in the detention centres, informs UNHCR that they have one of the refugees and that he may be deported; UNHCR intervenes to understand the risks and to advocate against deportation. Advocacy often succeeds — unless national security is involved.  There are some successes with security cases, but those are the exceptions rather than the rule.”

A human rights organization monitoring the phenomenon observes that the legal provisions adopted for the deportations are very ambiguous. Deportations are executed following an administrative order. “Everything happens quite fast, and refugees cannot appeal to a court to challenge the decision.”[9]

Once the order has been released, Syrians are brought to the crossing-point of Nasib and, near this area are dropped in Syrian territory facing an uncertain and likely unsafe situation. An UNHCR source further explains that “there are not many areas that could be considered both safe and accessible from that point, and you have to go through a number of checkpoints of different groups to get anywhere.”[10]

Given the lack of transparency, one can merely speculate as to the reasons for the recent spike in refoulements. Since the Karak attack was carried by Jordanian citizens, it is difficult to establish a direct connection between this act and the repatriation of Syrians.

All sources agree that the Jordanian government might have sound reasons to legally implement some deportations based on national security motivations. However, the opacity of the procedure and the high number of deportees are concerning and deserve scrutiny.

A diplomatic source says that deportations target not only single individuals, though in at least in some cases, they also involve family members.[11] This may be because the family is dependent on the income of the deportee and, therefore, they have no choice but to leave with him. Nevertheless, with respect to the family members thus affected the process is no less coercive.

According to a recent report from a Syrian non-governmental organization (NGO), even a phone call to a Syrian number can cause suspicion among Jordan security forces and prompt a deportation procedure.[12] U.N. officers as well as NGO practitioners have confirmed to the author that even they are careful in making phone calls to southern Syria, as this seems to raise concerns with the Jordanian security forces.[13]

There are also cases that include deportation on the grounds that the individual in question lacks a work permit. This is not entirely surprising; even before the adoption of the Jordan Compact of 2016, there were reports of detention of refugees found working without permit.[14] “Syrians for Truth and Justice” reports that some Syrians have been forcibly deported to Syria on this basis.[15]

These various circumstances, therefore, indicate that the increasingly common practice of refoulement in Jordan may be related to broader dynamics than security. Can the situation be addressed? “This is a tough one,” a UNHCR senior officer explained, “and may stay with us for a while.” He observed that in 2015 and 2016 some 25,000 refugees from Rukban were admitted to Jordan and relocated to al-Azraq Camp following intensive international advocacy on behalf of those trapped on the border.[16]

The spike in forced repatriations in January coincided with President Trump’s Executive Order prohibiting individuals from seven Muslim-majority countries from entering the United States.[17] “Certainly one of the loudest and most significant voices for protection of refugee rights in Jordan has been the United States, as of November [with the election of Donald Trump] it appears quite clearly that this could change, and maybe there will be less criticism from now on when refugee rights are not respected.”[18]

An anecdote from a humanitarian practitioner describes a similar situation during a meeting in which Spanish representatives criticized Jordanian practices of refugee refoulement.[19] This prompted a reaction from a Jordanian counterpart, who observed that Spain was following the same practice in dealing with migrants on the border between Spain and Morocco.[20]

That states associated with the liberal political tradition are also committing egregious violations of human rights and failing to fulfil their humanitarian obligations is certainly not news. Yet, that these principles are openly denounced also by them as superfluous impediments to anti-migration policies or harsh security measures, has created an opportunity for reverse moralism to spread, as Middle Eastern governments seek to justify arbitrary decisions in responding to refugee crises.

Note: The research presented in this essay was partly funded by the Leverhulme Trust.

[2] A report issued by the European Union’s Emergency Response Coordination Centre (ERCC) on January 17, 2017 estimated that 75,000 individuals were present in the border area, accessed July 12, 2017, http://erccportal.jrc.ec.europa.eu/getdailymap/docId/1889.

[4] Tom Stoddart, “The Interview: Queen Rania of Jordan on the refugee crisis, Isis and being a Muslim woman,” The Sunday Times, April 30, 2017, accessed July 12, 2017, https://www.thetimes.co.uk/article/the-interview-queen-rania-of-jordan-jm7tlzb3n.