The Revolution in Tunisia Continues 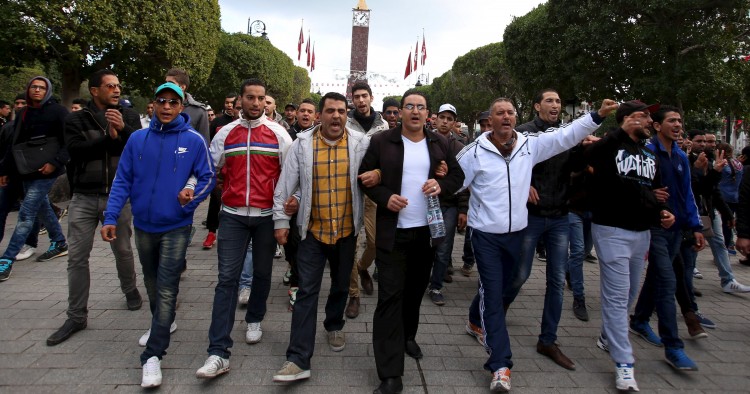 In April 2016, on the serene Tunisian island archipelago of Kerkennah, just east of Sfax, the country’s industrial hub and second largest city, a hitherto unimaginable event occurred. Angered by the violent repression of a peaceful sit-in, the inhabitants of Kerkennah rose in defiance of the police, and following less than a week of pitched street battles, forced the police to retreat from the archipelago.[1] The sit-in was the result of ongoing disagreement between inhabitants, an oil and gas company operating on the island, and local governance over social benefits and employment terms, and was organized by the Union of Unemployed Graduates (UDC), a major player in pre-revolutionary resistance—especially during a 2008 rebellion in the Gafsa mining region—and one of Tunisia’s largest post-revolutionary social movements. The violent eviction of fewer than a hundred peaceful protestors by a police contingent of several hundred strong—perceived as state disdain of local demands—impelled citizens to join the protesters in forcing the police off the island and to push police vehicles into the sea. The police have yet to return to the archipelago.

The reaction of the inhabitants of Kerkennah was symptomatic of broader and simmering discontent across the country, rooted in social inequality, economic alienation, and political disillusionment.[2] While certainly out of the ordinary, the Kerkennah events were one of a series of ongoing protests organized by the UDC across the country, which intensified after the electrocution and death of Ridha Yahyaoui in Kasserine in January 2016.[3] The violent police response to the protests were viewed by many as an attack on morality and basic human dignity,[4] and signified the continuation of the exclusionary politics of past regimes. Combined, these localized protests reveal the logic of non-institutionalized contention that continues to define critical political engagement in post-Revolutionary Tunisia. Moreover, these outbursts of anger and contestation point to the limits of consensual pacts framing formal politics,[5] and underscore local logics of solidarity based on a moral politics of dignity, protection, and inclusion.

The events in Kerkennah also symbolize two critical trends in contemporary Tunisian politics—trends that reveal persistent grievances that perhaps have become more visible and pronounced since the 2011 Revolution, but that nonetheless highlight Tunisia’s long-standing and deeply rooted structural socio-economic challenges. First, non-institutionalized and informal means of political engagement—contentious political movements—are doing profoundly different work[6] from the celebrated, internationally-supported civil society, that has been criticized for its depoliticizing effects. Second, the weakness of the opposition within Tunisia’s elected parliaments rendered it unable to effectively channel the grievances of marginalized and unemployed populations, thus opening the possibility, if not necessity, for informal political contention. Third, and relatedly, non-institutional and informal political contention will likely expand in scope, support, and activity in light of the public perception of looming economic austerity programs and contracted public sector. Steadily growing since the Revolution, such fears have been further accentuated following the appointment of an economic-reform government in August 2016.[7]The dual trends of continued anger at inequitable development and justice and fear of economic austerity measures call for attention to what Jillian Schwedler has termed, “the politics of time,”[8] or a critical assessment of how long-standing discontent is anchored in specific “temporal registers,” to understand Tunisia’s ongoing political contention.

This essay positions Tunisia’s contentious social movements as pivotal political campaigns and as continuities of long-standing grievances, which the 2011 Revolution epitomized to many.[9] Now, as before and during the Revolution, such protests signify an important rupture with Tunisia’s technocratic politics-as-usual and underscore the fact that prescriptive economic solutions and promises made by current and past governments are not satisfactory measures to address this primary and fundamental form of political discontent.

The political dimension of informal engagement and contention underscores that Tunisia’s contentious social movements are necessary for Tunisia’s democratic consolidation, in that they allow citizens to contest unpopular policies, challenged unmet promises, and push against the Tunisian political establishment by holding politicians accountable.  This level of contention is the foundation and opportunity to revisit the country’s political vision, and the necessary counter weight to authoritarian tendencies.

The Limits of Formal Politics

Tunisia’s social discontent stems from generations of political and economic exclusion, and is underscored by what Beatrice Hibou describes as uneven state processes that render social and economic inequalities legitimate.[10] If the 2010/2011 revolutionary social movement was a result of this system of exclusion, the structural conditions that created this inequality have yet to be prioritized by democracy-aid programs or government reforms. Rather than addressing inequality as the pressing economic problem itself, pundits continue to view structural inequality as a negative by-product of the economy that can be solved with quick fixes (and unfulfilled promises). These social movements are unlikely to diminish in light of the new government’s recent promises to adopt draconian economic policies that can potentially create more rather than less inequality. As Dina Bishara writes[11], if ignored, such long-standing grievances can build deep-seated anger and resentment that can prove to be as destabilizing to Tunisia’s nascent democracy as unpopular economic and political pacts themselves.

The movement in Kerkennah, like previous encounters on the island of Djerba during the 2012 Guellala garbage crisis and in Kasserine over hiring practices, is a powerful reminder of the limits of legitimacy in formal politics, when politics are recast as consensual arrangements or projects of national unity. The violent quashing of peaceful protests and petitions over basic livelihood demands—community waste management or employment promises and guarantees—intensifies existing discontent. Moreover, as consensus was casted as a mechanism to eliminate the politics of protest, these voices have been preventing from representation. A consideration of non-institutionalized political engagement through the lens of temporal registers provides a different scope of where Tunisia’s main grievances lie, what kind of dissenting politics they produce, and how they are approached (and sometimes ignored). Despite widespread acknowledgement that solutions to Tunisia’s structural economic problems are the key to consolidating democracy, efforts to decouple the economic question from political contention is telling of a strategy to quell social discontent.Contentious political activity, once the celebrated stimulus of the 2011 Revolution, today is viewed as a threat that needs to be contained, tamed and criminalized at worse, instead of recognized as the crux of the problem that needs to be addressed and resolved.[12]

The Problematic Politics of Economic Reconciliation

The economic question has been central to most political platforms, analytical accounts, and programming in Tunisia, though through radically different perspectives. While proposed austerity measures have been challenged by oppositional political parties and civic movements critical of consensual economic and political pacts, President Beji Caid Essebsi’s 2015 Economic Reconciliation Bill proposed forgiving economic crimes and corruption committed by civil servants and businessmen under the Ben Ali regime in exchange for closed-door confession and pay-backs, prompting the formation of the symbolically powerful and highly vocal Manish M’sameh campaign.

Corruption—especially around private sector development—was a key characteristic of the Ben Ali dictatorship and a major point of contention during the 2010/2011 protests and ensuing movements. Manish M’sameh first organized a public protest to block the introduction of the economic reconciliation bill on September 12, 2015, with the goal to protect Tunisia’s transitional justice process and to safeguard the investigation of economic crimes committed under previous regimes within the Truth and Dignity Commission (IVD), created in the summer of 2014. The campaign’s spokesperson[13] anchors Manish M’sameh in pre-Revolutionary resistant politics and post-Revolution instances of radical political engagement such as the 2014 “I too burned a police station” campaign.

With a horizontal structure, the campaign’s first act was to raise public awareness of the proposed reconciliation bill by organizing a protest in Tunis uniting various political factions, followed by local protests across the country. Politically, the campaign sought to block a coalescence of political consensus around “turning the page” by forgiving economic crimes, and to protect the legitimacy of the transitional justice process. Strategically, the campaign worked to reunite Revolutionary activists and to attract new support. As the economic reconciliation bill was set to be introduced at the end of July 2016, the second phase of the Manish campaign was called “Wanted”: caricatures of former political elites reminiscent of Wild West Wanted Criminal posters were plastered across public space with reward sums. The satirical approach to confronting reconciliation raised awareness about the most notoriously corrupt personalities of the previous regime through sharp humor.[14] That week, the coordination committee of Manish spearheaded a letter campaign to members[15] of Parliament, ahead of the bill’s reintroduction and organized another public protest in downtown Tunis to contest the draft law.

Over the past year, the Manish M’Sameh campaign united oppositional political parties, grassroots civil society organizations, and social movements to block efforts to turn the page on economic crimes and to protect the sovereignty of the transitional justice process. The campaign has redirected public discourse towards truth and reconciliation as a necessary form of social mediation. And it has called the Tunisian public to reopen the debate around structural inequalities and corruption, rather than to allow incumbent politicians to co-opt the process to propose solutions to economic problems as well as forging political commitments.

Political Activism from the Periphery

The short recounting of the April 2016 events on the isle of Kerkennah symbolizes the continuity of a profound political struggle against decades of entrenched structural inequalities that have provoked what political scientist Hamza Meddeb analyzes as an informal economy of necessity in the case of Tunisia (relying on Fariba Abdelkah’s analysis of Iran): a material and moral struggle for survival against politics of injustice.[16] Citizen solidarity witnessed during the 2008 rebellion in Redeyef and Gafsa, 2012 clashes in Djerba and 2016 confrontation in Kerkennah remind us of the moral politics defining the material demands of these struggles.

The political fight against persistent structural inequalities has long-standing roots in Tunisia and varies topographically as the product of various projects of political and economic reorganization in pre-and post-colonial administrations. This struggle is especially pronounced in hinter regions where citizens experience the real absence of the modern state and unequal access to promised social services.

Contemporary aggressive state responses to political activism in the periphery—sites such as Kasserine, Kerkennah, Gafsa—are the state’s tacit acknowledgment that these movements and campaigns touch on the very political weakness of the regime: unfulfilled promises of social and economic equality. Such responses also point to the hitherto absence of institutionalized local mechanisms of participation, weakness or absence of local governance due to the absence of elected municipalities and regional councils, and the continuity of top-down decisions dismissing the basic grievances, claims and needs of its citizens. In such under-served zones, non-violent sit-ins and protests met with violent state responses, which in the current context spur citizens to join such movements in solidarity against unjust state reactions reminiscent of the Ben Ali era. It is under such conditions that Tunisia has witnessed the formation and continuity of sustained protest to the formal politics of pre-and post-revolutionary governments. The repertoires of contention that occur in Tunisia’s periphery through non-institutionalized means remind us that, for many, the Revolution is not over and that Tunisia’s struggle for moral and material equality will continue.

[6] This analytical angle on the effects of protests is developed by Jillian Schwedler (forthcoming).