The Rohingya and Refoulement in Southeast Asia 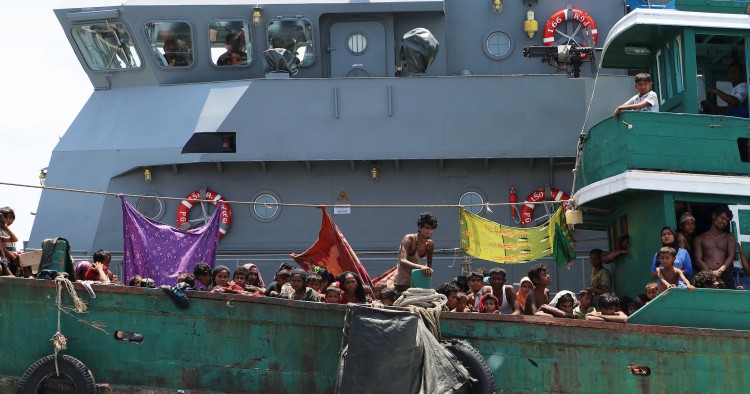 The initial response to 8,000 Rohingya and Bangladeshi asylum seekers and migrants afloat in the Andaman Sea and Bay of Bengal in May last year is well-known. For weeks, Thailand, Malaysia and Indonesia pushed back the boats, rebuffing them from their coastlines after delivering fuel and food. This response, which created a humanitarian emergency, raises important questions about the status of key norms of international refugee law in the region.

International law offers no individual right to asylum, instead imposing a duty on states to refrain from refoulement—the forced return of refugees to a place where they risk persecution. This refugee law prohibition has been strengthened by human rights law, which protects against the forced return of any person to a place where there is a risk to her life or risk of torture or inhuman or degrading treatment.[1]

Moreover, the principle of non-refoulement is now generally considered to be customary international law.[2] This means that states are bound by the principle whether or not they have signed the Refugee Convention or other relevant human rights treaties.

Were the pushbacks refoulement?

Article 33(1) of the Refugee Convention prohibits the expulsion or return of “a refugee in any manner whatsoever to the frontiers of territories where his life or freedom would be threatened” on a Convention ground (my emphasis). In the Rohingya case, boats carrying refugees were turned around and pushed out to sea, but not physically returned to a particular place.

The word “territories” is wider than a country or state, but does the term include the high seas? According to the Cambridge English Dictionary, the word “territory” is wider than a country or state and may include both land and sea, but one that “is considered as belonging to or connected with a particular country or person.”[3] It seems likely, then, that the 2015 boat pushbacks do not violate the principle of non-refoulement under the Refugee Convention alone.

Similarly, the pushbacks may not amount to refoulement under human rights law. Article 3 of the Convention Against Torture (CAT) provides: “No State Party shall expel, return (‘refouler’) or extradite a person to another State where there are substantial grounds for believing that he would be in danger of being subjected to torture’ (my emphasis).[4] As the pushbacks did not expose those on board to torture nor involve actual return to another state, the actions do not fall under Article 3 of CAT.

Article 7 of the International Covenant on Civil and Political Rights (ICCPR) provides that “no one shall be subjected to torture or to cruel, inhuman or degrading treatment or punishment.” The Human Rights Committee has interpreted this as encompassing non-refoulement, finding: “States parties must not expose individuals to the danger of torture or cruel, inhuman or degrading treatment or punishment upon return to another country by way of their extradition, expulsion or refoulement” (my emphasis).[5] While the pushbacks raised serious issues related to inhumane or degrading treatment, they did not involve return to another country.

While the pushing back of boats raised extremely serious human rights and humanitarian concerns, they did not amount—in this case—to refoulement. This raises the question of whether Southeast Asian states are bound by non-refoulement at all.

Are Thailand, Malaysia and Indonesia bound by non-refoulement?

Only three states in Southeast Asia are party to the 1951 Refugee Convention: Cambodia, East Timor and the Philippines. The U.N. High Commissioner for Refugees’ (UNHCR) 2015 overview of the region points to “an increase in maritime ‘push backs’ and instances of refoulement.”[6]

As Thailand, Malaysia and Indonesia are not parties to the 1951 Refugee Convention and do not have domestic legislation recognizing refugees, protection from refoulement relies on general human rights law. Indonesia and Thailand, for example, are parties to the ICCPR and CAT.

Non-refoulement is today almost universally considered to be customary international law.[7] A customary norm is based on widespread state practice supporting the rule and on opinio juris, states’ sense of legal obligation to adhere to the rule.[8] This means that, irrespective of whether the state is a party to a treaty, it is nonetheless bound by the rule. However, Southeast Asia’s low uptake of the Refugee Convention, the absence of a regional human rights treaty, and pushbacks at sea raise questions about the status of non-refoulement in the region.

It is beyond the scope of this essay to offer an extensive assessment of the status of non-refoulement in Southeast Asia, but its customary status is clearly in greater doubt than in other regions.

Considering first the requirement of opinio juris, no binding instrument guarantees against refoulement. In contrast to Europe, Africa and the Americas, Asia has no regional human rights treaty with a prohibition against refoulement. The non-binding Bangkok Principles of 1966, recapitulated in 2001, include a robust non-refoulement protection.[9] ASEAN’s Human Rights Declaration of 2012 includes the right to seek asylum in another state, but only “in accordance with the laws of such State and applicable international agreements.”[10]

During the Indochinese refugee crisis of the 1970s, most Southeast Asian states denied the existence of a customary norm of non-refoulement in the region.[11] Instead, delegates argued that the practice of admitting Vietnamese asylum seekers was on the basis of humanitarianism, rather than a binding norm that existed notwithstanding a lack of treaty obligations. Hathaway, writing in 2010, claimed that there was a “persistent refusal of most states in Asia” to be bound by non-refoulement, with explicit reference to the policy positions of Thailand and Malaysia.[12]

In support of opinio juris, Cathryn Costello and Michelle Foster report that the United Nations General Assembly has passed 40 resolutions since 1977 recognizing non-refoulement.[13] UNHCR’s Executive Committee (ExCom) has also routinely emphasized the fundamental nature of the prohibition though, of its 98 current members, the Philippines and Thailand are the only Southeast Asian states represented.

Turning to the question of consistent state practice, Southeast Asian states refouled large numbers of asylum seekers during the Indochinese refugee crisis saw, both at land and sea borders. In 2015 UNHCR reported that some states in the region had “introduced increasingly restrictive policies—such as denying safe disembarkation or access at the airport, and narrowing protection space and access to asylum. There is also an increase in maritime ‘push backs’ and instances of refoulement.’[14]

State practice need not be universal, but should be sufficiently widespread to be general practice.[15] Refoulement remains the exception and not the rule in South East Asia. Thailand and Malaysia both host in excess of 100,000 asylum seekers and refugees, and have done so for decades. Indonesia treats asylum seekers and refugees with “benevolent neglect” but rarely carries out rejections at the border or deportations.[16]

Given the low uptake of the 1951 Convention and its Protocol, the 2015 Rohingya crisis raises the issue of whether non-refoulement has attained customary status in the region. Answering this question requires more than the brief analysis above. Nevertheless, it is clear that the status of non-refoulement is in greater doubt than in many other regions of the world.

On the one hand, the Rohingya crisis shows the fragility of refugee law in Southeast Asia. While the pushbacks likely fell outside the scope of non-refoulement, the actions of Thailand, Malaysia and Indonesia clearly amounted to rejection at the border and tested the limits of refugee law. On the other hand, the 2015 crisis could be seen as support for non-refoulement, as states in the region avoided actually returning the Rohingya to a place of persecution.

[4] Convention against Torture and Other Cruel, Inhuman or Degrading Treatment or Punishment. Adopted and opened for signature, ratification and accession by General Assembly resolution 39/46 of December 10, 1984, entry into force June 26, 1987, in accordance with article 27 (1)

[8] See International Court of Justice in Military and Paramilitary Activities in and against Nicaragua (Nicaragua v. U.S.), Merits, 1986 ICJ Reports, 14, para. 186, “[i]n order to deduce the existence of customary rules, the Court deems it sufficient that the conduct of States should, in general, be consistent which such rules, and that instances of State conduct inconsistent with a given rule should generally have been treated as breaches of that rule, not as indications of the recognition of a new rule. If a State acts in a way prima facie incompatible with a recognized rule, but defends its conduct by appealing to exceptions or justifications contained within the rule itself, then whether or not the State’s conduct is in fact justifiable on that basis, the significance of that attitude is to confirm rather than to weaken the rule.”

[13] Cathryn Costello and Michelle Foster, “Non-refoulement as custom and jus cogens? Putting the prohibition to the test,” 288-289.