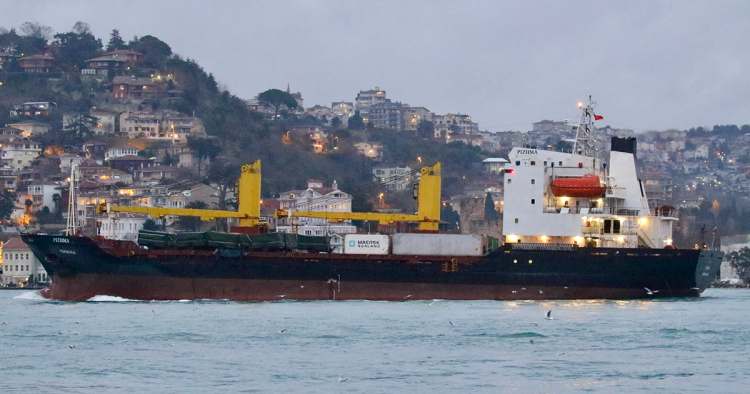 On Feb. 28, Turkey triggered the Montreux Convention, not used since World War II, and closed the Turkish Straits to military ships. This one move interrupted Russia’s maritime logistical supply line to Syria, interfered with its ability to rotate naval assets in the Mediterranean, and prevented Moscow from bringing additional warships to the Black Sea. Russia can no longer supply its Syria operation or deliver defense exports to its customers using navy ships. However, close observation of traffic through the Turkish Straits reveals that Russia is continuing its naval operations in the Mediterranean and Black seas.

The current closure of the Turkish Straits under Montreux applies only to naval vessels. Free transit through the Straits for commercial purposes continues. Russia is abusing this distinction by using civilian merchant vessels as naval auxiliaries to supply logistics to its military operations in Syria and Ukraine. This is not the first time Moscow has done this either. At the height of its Syria campaign, the war effort required more supplies than the Russian Navy, or Voyenno-Morskoy Flot, could carry. Russia bought old civilian cargo ships from Turkey, reflagged them, and began using them for its war. And now, Russia is once again using civilian ships to supply its military campaigns in Syria and Libya, and to fulfill existing contracts, such as Rosatom’s nuclear power plant construction in El Dabaa, Egypt or exporting defense products to Algeria. Russia is also plundering commodities from occupied territories in Ukraine, especially from the port of Sevastopol’s Avlita grain terminal. It is absurd that Russia has been allowed to weaponize commercial trade by illegally blockading the Odesa and Chornomorsk harbors, while also profiting from the sale of stolen Ukrainian grain, exported from an occupied Ukrainian port.

Russia has found a way to work around the current closure of the Turkish Straits by supplying logistics to its military operations in Syria or Ukraine using supposedly private companies and civilian ships. The use of civilian merchant vessels for war violates the spirit of the Montreux mechanism that was used to close the Turkish Straits. Even if it is legal, it is not acceptable and should not be allowed.

When Ukraine wins the war, the balance of power in the Black Sea region will change fundamentally. Having exposed its own profound operational problems, Russia will no longer enjoy the perception of superiority. Expect more challenges, especially from Black Sea countries. Ukraine will emerge from the war stronger, with an experienced army and coastal defenses strengthened by new Western anti-ship weapons that will further reduce Russia’s ability to patrol coastal waters. Both Romania and Georgia are interested in a greater U.S. and NATO presence in the Black Sea.

Turkey’s approach to Russia will change too. Its navy is already the strongest in the Black Sea, powered by new frigates armed with new indigenous technologies, and a growing submarine fleet that already outnumbers Russia’s Black Sea Fleet three to one. It also has new gas fields in the Black Sea to protect. These changes are likely to affect implementation of the Montreux Convention. When Montreux was written, the Black Sea was understood to be under the control of the Soviet Union and Turkey, with the Soviet Union superior. Everything has changed now. Ukraine, Romania, and Georgia will want to review the limitations that Montreux currently imposes on ships from non-Black Sea countries in its waters.

For now, Turkey must use all its means to end the war sooner by choking off Russia’s illegal activity and revenues. Closer inspection is required of vessels transiting the Turkish Straits. NATO should be more vigilant about inspecting ships possibly carrying arms. Ro-ros bound for the Black Sea that are likely carrying suspicious cargo should be boarded and inspected in the international waters of the Mediterranean. Closure of the Turkish Straits to merchant ships working for the Russian war effort should be considered. Turkey should prevent civilian merchant vessels from supplying Russia’s wars by carrying military cargo.

Action must also be taken to re-establish global food security. Russia is stealing Ukrainian commodities on an industrial scale and selling them; profits from these illegitimate sales extend the war. Great amounts of stolen commodities end up in Turkey, some even carried inexplicably by the Syrian government shipping company SYRIAMAR. Buyers, including companies in Turkey, are wrong to get involved in this illegal trade. Turkey should instead focus on rebuilding Ukraine. While Russia continues to blockade Ukraine’s most essential ports at Odesa and Chornomorsk, its ships should be denied commercial access to the Turkish Straits.