Russia's invasion of Ukraine and the nature of Iranian-Russian relations 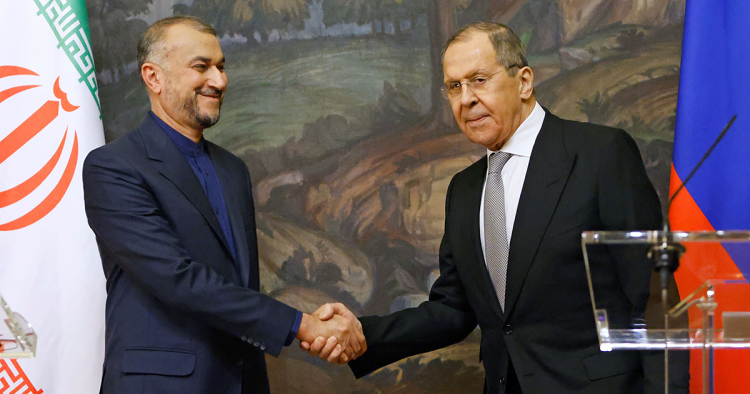 Russia’s Feb. 24 invasion of Ukraine, which triggered Europe’s first major conflict since the Balkan Wars of the 1990s, marks a watershed in the continent’s post-Cold War history. The conflict poses significant security challenges for countries throughout Eurasia and beyond, and has given rise to unexpected changes in long-established European foreign and security policy paradigms toward autocracies, as the case of Germany illustrates. Iran is by no means immune to the geopolitical changes underway.

Before the war on Ukraine broke out, after almost a year of back-and-forth diplomatic efforts in Vienna, the Iran nuclear negotiations seemed poised to revive the 2015 Joint Comprehensive Plan of Action (JCPOA). The invasion, which caught many in the West by surprise, initially led Tehran and Moscow to seemingly modify their positions, giving rise to widespread uncertainty over the talks and even fears of their collapse. As of late March, however, the talks appear to be back on track and are expected to lead to a deal soon.

Beyond the JCPOA, the New Cold War pitting Vladimir Putin’s Russia against the transatlantic alliance has also re-energized debates within Iran about its implications for the country’s standing in the world order. In this context, it is crucial to analyze Iran’s domestic discourse about its powerful Russian partner — some might say overlord — and its relationship with the leadership in Tehran.

Iranian reactions to Russia's invasion and Moscow acting as overlord

The Islamic Republic of Iran’s official reaction to the Russian invasion, both by state media and officials, echoed Moscow’s war propaganda, all while paying lip service to “the preservation of the territorial integrity and national sovereignty of all countries” (in the words of President Ebrahim Raisi). In most cases, the invasion was described as a Russian “special operation” provoked by the eastward expansion of the U.S.-led NATO alliance. From this viewpoint, Russia is simply safeguarding its security in the face of decades of destabilizing Western expansionism. This narrative has been promoted by key Iranian media outlets (affiliated with the state and the Islamic Revolutionary Guard Corps or IRGC) and representatives (including the supreme leader, president, minister of intelligence, and the Tehran Friday prayer imam). Russia’s invasion of Ukraine, they argue, constitutes a necessary act of resistance against Western/NATO aggression, so blame for the present escalation lies squarely with the latter. By defending Russia, they implicitly justify Iran’s own offensive regional posture, known as “forward defense,” which Tehran similarly likes to portray as a legitimate reaction to equally destabilizing U.S. expansionism in its near abroad.

From this elite group’s perspective, Russia’s move against Ukraine in the face of Western hesitation is in line with Tehran’s own interests and overlaps with an Iranian grand strategy of confronting the U.S. and projecting power in the Middle East and beyond. Western reluctance to intervene, especially militarily, poignantly signals the decline of U.S. power. The image of America’s military prowess had already been undermined by the fiasco of the Afghanistan withdrawal last fall and other West Asian quagmires in which the U.S. and its allies failed to overcome Iran-allied groups. In sum, these misadventures left Washington bereft of its superpower status in international relations.

However, the Islamic Republic’s pro-Kremlin narrative has not remained unchallenged. There have been important cracks even with some major media outlets and especially so across Iranian society. Those seeking to bring forth counter-narratives, however, face daunting obstacles.

Russian tutelage over Iranian media reporting — a demonstration of neo-colonialism

After the Russian embassy in Tehran condemned a report by the Tasnim News Agency — which, curiously, is affiliated with the pro-Moscow IRGC — as “fake news” for characterizing Putin’s operation in Ukraine as an “invasion,” the report was taken offline and replaced with one that closely mirrors the Kremlin’s official wording. In another instance, the embassy lashed out against an Iranian reformist daily that criticized Russia for threatening to derail the JCPOA negotiations. Later, on March 9, Russia’s ambassador to Tehran held a press conference urging Iranian media not to use the terms “war” or “invasion” in their coverage, a blatant interference in Iranian domestic affairs that has stoked anger in the country.

These cases bring to mind similar interventions by China’s embassy in Iran against unfavorable media reporting and official statements, most recently about China’s alleged stationing of security forces in Iran to protect its investment interests. Earlier, in the pandemic’s first year, the Chinese embassy had stepped in to silence skeptics of Beijing’s official COVID-19 statistics.

Such interference by ambassadors from both non-Western great powers into Iran’s domestic affairs reflects the nature of Tehran’s relations with Russia and China, upon which Iran’s entire “look to the East” geopolitical strategy depends. A yawning power gap results in chronic Iranian weakness and dependency, raising the specter of a neo-feudal arrangement whereby Tehran’s leadership follows the diktats of their masters in Moscow and Beijing. However, Russia’s newfound pariah status may improve Iran’s standing in bilateral ties, but only if Tehran plays its cards carefully and doesn’t degenerate into a power that simply follows Putin’s whims.

At its core, Iran’s “look East” policy has as its goal not only economic development and political support against Western pressure, but the very survival of a regime whose domestic support has been hollowed out. Moscow and Beijing hold up this teetering regime from the outside. Hence, the Islamic Republic finds itself granting concessions to Russian or Chinese interests, and sometimes even trying to anticipate their apparent desires.

In this context, fears associated with Iran’s already signed 25-year comprehensive cooperation agreement with China are mirrored by those over the planned 20-year deal with Russia. Both long-term agreements, which are branded as “strategic,” lack transparency and have therefore stoked wild speculation. Theories abound that the Islamic Republic’s leadership is potentially selling out the country only to cement its own power amid unprecedented domestic and international pressures with the help of these non-Western great powers and their U.N. Security Council vetoes.

As a core pillar of the deal with Russia, which Iran’s foreign ministry said last December was “almost finalized,” Moscow will reportedly protect Tehran’s interests at the U.N. Security Council and with the JCPOA, and finally provide it with advanced military hardware (such as the S-400 missile defense system and Sukhoi Su-35 fighter jets) in exchange for Russia obtaining favorable deals on Iran’s oil and gas fields. Coinciding with this 20-year agreement is another reported deal between the two countries from last fall, granting Russian companies the largest share in the recently discovered giant Chalous gas field in Iran’s Caspian Sea territory (followed by Chinese companies and only then Iranian ones, more concretely those affiliated with the IRGC).

For Russia, Iran has been a true trump card, enabling it to leverage the “Iranian threat” vis-à-vis the West while also benefitting economically from ties with Tehran, including re-energizing its nuclear industry through its prominent role in Iran’s nuclear program. Therefore, if Iran normalizes relations with the West, that would likely sharply curtail Russia’s influence. In other words, a Western-oriented Iran would constitute a larger threat to Moscow’s interests than a “nuclear Iran.”

The nature and possible ramifications of Iran’s relationship with Russia are hotly debated across Iranian society. Iranian fears emerge from the unevenness of bilateral ties and the perceived disconnect between national and regime interests vis-à-vis Russia — or China for that matter.

These concerns about Russia are rooted in both history and geopolitical realities. The bitter memories of the 1908 bombardment of Iran’s parliament by the Russia-led Persian Cossack Brigade meant to torpedo the Constitutional Revolution as well as the 1941 Anglo-Soviet invasion linger in the collective consciousness as a reminder of the Kremlin’s willingness to run roughshod over Iran in pursuit of its interests. Moreover, some elements of Iran’s foreign policy community see Russia as flip-flopping when it comes to the perennial conflict between Iran and the West. For them, Moscow is an opportunistic actor focused solely on achieving its own aims, even if it means contradicting official rhetoric that lambasts the U.S. and the West, including its propensity to keep the flame of the Iran-West conflict alive as a means to maximize Moscow’s standing in that conflictual triangular relationship. Among other things, Russia is accused of breaking arms supply contracts, sabotaging the JCPOA process, and maintaining close ties with Iran’s regional foes (Israel, the United Arab Emirates, and Saudi Arabia).

Furthermore, there are also broader concerns within society over the long-term alliance the Iranian regime hopes to forge with the like-minded autocracies of Russia and China. Although sparsely attended, anti-war protests in front of the Ukrainian embassy in Tehran, complete with chants of marg bar Putin (“death to Putin”), illustrate the anti-Moscow sentiment. Such reservations about Russia also pertain to China. Yet there is no organized opposition to the regime’s deepening of ties with either.

The interests of the regime and those of Iranian society clash over Russia. While the former sees Russia as a formidable military-security guarantor of its stability and survival, the latter sees in such support a looming threat to democratic aspirations. Pro-democracy Iranians fear that Moscow could boost their country’s repressive apparatus, and potentially even deploy its military if popular protests ever were to imperil the regime — as witnessed in both Syria and Kazakhstan. The relationship between the Russian and Iranian regimes is also strengthened by their parallels: Both are petro-states with mafia-style ruling classes helmed by all-powerful autocrats unafraid of using a heavy hand and guided by their nostalgia for the glory days of empires past.

Dr. Ali Fathollah-Nejad is an Associate Fellow and the author of the Iran in Focus brief at the Issam Fares Institute for Public Policy & International Affairs (IFI) at the American University of Beirut (AUB). He is also the author of Iran in an Emerging New World Order: From Ahmadinejad to Rouhani (2021) and the initiator and co-host of the Berlin Mideast Podcast (Konrad Adenauer Foundation). He is affiliated with the Center for Middle Eastern and North African Politics, Freie Universität (FU) in Berlin and the Centre d’Etudes de la Coopération Internationale et du Développement (CECID) at the Université libre de Bruxelles (ULB). You can follow him on Twitter. The views expressed in this piece are his own.