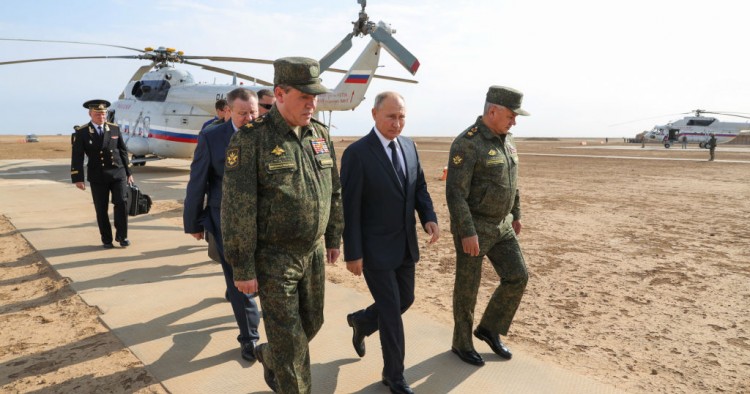 The recent ceasefire agreement signed by Armenia, Azerbaijan, and Russia halted the armed phase of the Nagorno-Karabakh conflict following 45 days of fighting and thousands of military and civilian lives lost on both sides. This new deal has significantly altered the conflict composition by allowing hundreds of Russian peacekeeping troops to be deployed along the line of contact and along corridors connecting Armenia with Nagorno-Karabakh and Azerbaijan with its Autonomous Republic of Nakhchivan.

Russian peacekeepers have already been deployed to the conflict zone to oversee implementation of the agreement. It now remains to be seen whether they will be joined by Turkish counterparts, either in the field or at a joint monitoring center in Azerbaijan. The latter is the first disagreement between Moscow and Ankara over peacekeeping in the region.

From 1995 until now, Baku, Yerevan and Stepanakert/Khankendi had a rare point of agreement on resisting any military deployment to the disputed territories due to fears that it could lead to ‘an occupying force’. Armenian, Azerbaijani, and de facto officials have tended to prefer civilian-led observation missions, although could not agree on details. This was demonstrated when the OSCE High-Level Planning Group (HLPG) struggled to gain consent from all sides on any of the possible scenarios for OSCE multinational peacekeeping mission.

Aside from the HLPG, in which people are assigned tasks in Vienna but rarely visit the conflict zone, the OSCE Personal Representative of the Chairperson-in-Office, based in Tbilisi, is mandated to monitor the frontline of the conflict and the Armenia-Azerbaijan border. However, this monitoring exercise is limited to several-hour field visits twice a month, preliminarily agreed with the conflicting sides. For these and other reasons, critics of the OSCE Minsk Group – the main international effort to facilitate negotiations between Armenia and Azerbaijan – often refer to a lack of commitment and perseverance by its co-chairs (Russia, France, the United States) and permanent members (Belarus, Germany, Italy, Sweden, Finland, and Turkey, as well as Armenia and Azerbaijan) in pushing for a peaceful resolution of the Nagorno-Karabakh conflict.

The West’s failure to meaningfully engage in Nagorno-Karabakh has become even more apparent amidst the recent escalation of violent conflict. While the West stands aside, the Kremlin can take a lead in peace negotiation and peacekeeping processes. Laurence Broers of Chatham House recently reiterated long-standing concerns from both sides around Russia’s peacekeeping operations: “Russia has reasserted itself quite convincingly in the short to medium term but over the long term, this peacekeeping operation may start to look like an occupying force.” It is difficult to ignore concerns around Russian peacekeeping when there is precedent in Georgia.

Officially, Commonwealth of Independent States Peacekeeping Forces (CISPK) made up of 3 000 Russian troops (with a few Tajiks at the initial phase, thus usually referred to as ‘Russian’), was established to monitor the implementation of the Moscow Agreement of May 1994, which ceased military engagement between the Georgian and Abkhaz sides. Two months later, at Moscow’s request, the mission acquired UN mandate. The UN Observation Mission to Georgia (UNOMIG) deployed in August 1993 was assigned to monitor its operation. The Moscow Agreement defined the protocol for the mission operation, specifying objectives for the CIS/Russian Peacekeeping Forces as:

The document clarified that the Peacekeeping Mission was defined in the context of ‘a step-by-step, comprehensive settlement’ of the conflict.

Of the objectives outlined in the Moscow Agreement, Russia fulfilled only one that was in line with its ‘regional principal security logic’, considering a possible spill-over effect of secessionist movements in the North Caucasus. With their ‘over-whelming capacity to prevent a resumption of war’, Russian troops effectively separated the forces and froze the conflict on the ground.

The mission was highly criticized for its failure to ensure the safe return of refugees and Internally Displaced Persons (IDPs). For example, in 1995, approximately 200 ethnic Georgians IDPs were arrested for attempting to return to their homes and more than 20 others were killed. Out of at least 300 000 IDPs, around 47 000 were permitted back to the Abkhaz-controlled territory, and this was only in the Gali district close to the separation line. More than 1 500 Georgian homes were later burnt down, forcing more than 40 000 Georgians to leave once again. The CIS Peacekeeping Mission did nothing to prevent or halt this persecution, and “some executions took place in the open and were reportedly observed by CISPKF and UNOMIG personnel.”

Moscow effectively avoided its role as a peacekeeper responsible for addressing diverging issues and creating conditions for a peaceful resolution of the conflict. After the Georgian-Russia War in 2008, the Kremlin recognized Abkhazia as an independent state instead of pursuing a political settlement. This was despite Russia officially recognizing the territorial integrity of Georgia when Russia initiated the peacekeeping mission and advocating for legal status of the Abkhaz people within this framework.

Russia’s peacekeeping forces in Georgia were harshly criticized. Much of this criticism brought to the fore arguments often voiced by regional peacekeeping sceptics, such as concerns around primary interests and impartiality of the intervening side.

The Kremlin’s primary interest was to maintain the ceasefire in a way that increased its political and military control over Georgia by creating controlled instability in the country’s breakaway regions. A comprehensive political settlement of the conflict and safe return of IDPs were therefore not priorities for Moscow. Achieving a political resolution would limit Georgia’s reliance on Russia. Likewise, the return of IDPs would completely alter the demography of Abkhazia, meaning Georgians would obtain the voting majority and ultimately end Abkhaz secessionist aspirations.

The United Nations has identified impartiality as one of the “bedrock principles of peacekeeping,” but this doesn’t seem to have been taken on board by Moscow. Since the initial stages of the conflict, Russian forces have providied extensive military support to the Abkhaz side, leading to the Fall of Sokhumi in 1993. While the Kremlin claimed neutrality, “numerous eye-witness accounts testify to the bombardment of Georgian forces by Russian aircraft and the use of the Russian navy to transport Abkhazian fighters.” Ironically, Russian troops engaged in military activities against Georgians were later recruited as CIS peacekeepers, thereby violating UN impartiality standards.

Moscow further breached its impartial peacekeeping commitments with its ‘passportization’ policy. In 2005, the Russian Foreign Ministry admitted that more than 80 percent of Abkhazians held Russian passports. Considering Russia’s approach to protect Russian citizens in any place, Tbilisi’s concerns about the impartiality of Russian peacekeeping was quite legitimate. Revaz Adamia, Georgian Ambassador to the United Nations, raised the following points in relation to ‘passportization’ in 2002:

Russia’s façade of impartiality was destroyed in 2008 when it occupied not only South Ossetia but its military forces “opened up a new front by passing through the UN security zone and invading undisputed Georgian territory from Abkhazia.”

In the 12 years since the CIS Peacekeeping Mission was officially terminated, Russian troops, or ‘peacekeeping forces’ as they were once known, remain in Georgia as ‘occupying forces.’

Considerations for the peacekeeping mission in Nagorno Karabakh

There are many differences between the conflicts in Georgia and Nagorno-Karabakh, but Russia’s primary interest in the region remains the same: to regain control of post-Soviet states. It should therefore be expected that the Kremlin will exploit yet another conflict to keep these countries closely tied to Russia. This has already been demonstrated in Georgia, Ukraine and, to some extent, Moldova.

Russia’s approach to peacekeeping does not focus on enduring peace and stability in the conflict zone. With its military presence, Russia can effectively freeze the conflict between Azerbaijan and Armenia, while not creating conditions for peace. Russian peacekeeping operations are distinct from UN missions in that they lack any peacebuilding efforts that could support peaceful co-existence and constructive dialogue between alienated Armenian and Azerbaijani societies.

The absence of international organizations further removes even formal procedures holding Russian forces accountable for their actions in the field. The trilateral ceasefire agreement on Nagorno-Karabakh, a defining moment for Moscow’s peacekeeping role, left the OSCE Minsk Group without any lever to balance the Kremlin’s interests in the conflict. The Georgian experience shows that Russian peacekeeping may take a different turn.

Ketevan Murusidze is peace researcher and practitioner and MEL Officer at the UN Association of Georgia. The views expressed in this article are her own.