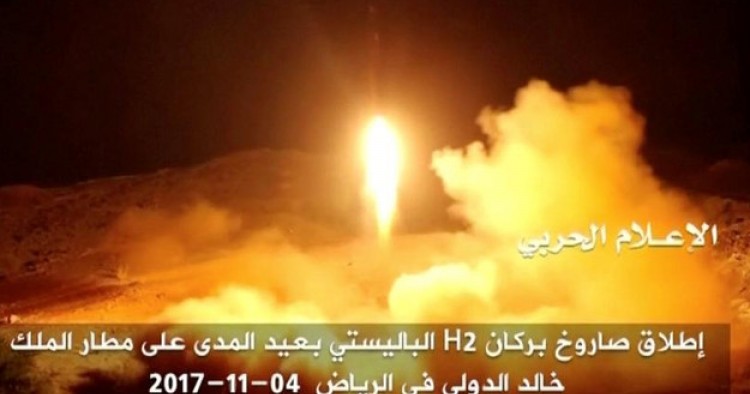 The Saudi security forces have intercepted and destroyed another ballistic missile launched from Yemen targeting the Saudi mainland, according to Saudi military officials.

On Thursday, Al-Masirah, a Houthi-run Yemeni outlet, claimed that the Iranian-backed Houthi militants successfully tested a new medium-range ballistic missile on military targets in Saudi Arabia. Abdel Malik al-Houthi, the group’s leader, said the rebels could “inflict deep pain” on the Saudis if Riyadh continued to restrict Yemeni ports. A report in Arabic in Al-Alam, an Iranian state-run outlet, also claimed that nine Saudi soldiers were killed and seven wounded by Houthi attacks.

However, the official spokesman for the Saudi-led coalition, Colonel Turki al-Maliki, said the Saudi Royal Air Force sighted the launch of the ballistic missile from within Yemen toward the Kingdom’s territory and successfully intercepted it. He added that the missile was heading toward the city of Khamis Mushait in Asir Province, but the R.A.F. destroyed the missile without any casualties. The Coalition emphasized that the latest ballistic missile attacks by Iranian-backed Houthi militants targeting Saudi cities provided further evidence that missiles and other weapons were being smuggled into Yemen, in violation of U.N. Security Council Resolution 2216.

In an interview with Sputnik Arabic earlier this week, a Houthi-aligned Yemeni military spokesman detailed the artillery that the rebel forces were using against Saudi Arbaia, including Russian Scud missiles and Iranian Zelzal-3s.

Comment: Yesterday’s incident was the second missile attack by Houthi rebels this month against targets inside Saudi Arabia. The Saudi military intercepted another ballistic missile fired at the country’s international airport in Riyadh on November 4. Following the attack, Saudi Foreign Minister Adel al-Jubeir accused Iran’s ally Lebanese Hezbollah of smuggling missile parts into Yemen. According to the Saudi Press Agency, Saudi Crown Prince Mohammad bin Salman said the “involvement of the Iranian regime in supplying its Houthi militias with missiles is considered a direct military aggression by the Iranian regime and may be considered an act of war against the Kingdom.”

Iranian officials, including Foreign Minister Javad Zarif, denied any Iranian involvement. But Reuters reported yesterday that a team of United Nations sanctions monitors has concluded that remnants of four ballistic missiles launched into Saudi Arabia by Houthi rebels this year, including residuals from the November 4 attack, appear to have been designed and produced by Iran. “Design characteristics and dimensions of the components inspected by the panel are consistent with those reported for the Iranian designed and manufactured Qiam-1 missile,” the monitors said. The independent panel of U.N. monitors has submitted the report to the Security Council.

Iranian officials often deny the Islamic Republic is providing weapons to Yemeni rebels. But in a rare admission last week, the head of the Islamic Revolution Guards Corps (I.R.G.C.) said Iran is providing assistance to the Houthi “resistance movement” fighting the Saudi-led Coalition. “Our assistance to the resistance front has been provided at the request of their people and governments, and Yemen is one of those examples. In Yemen, the power today lies in the hands of Ansarullah and Iran’s assistance is at the level of advisory and spiritual support,” Major General Ali Jafari said at a press conference in Tehran. He further stressed that the Islamic Republic will spare no effort to continue supporting the Houthi movement in the future. Although Jafari said Iran’s support to the Yemeni rebels is confined to “advisory” missions, he and other Iranian leaders make similar claims about Syria and Iraq despite Iran’s substantial military involvement in the two countries.