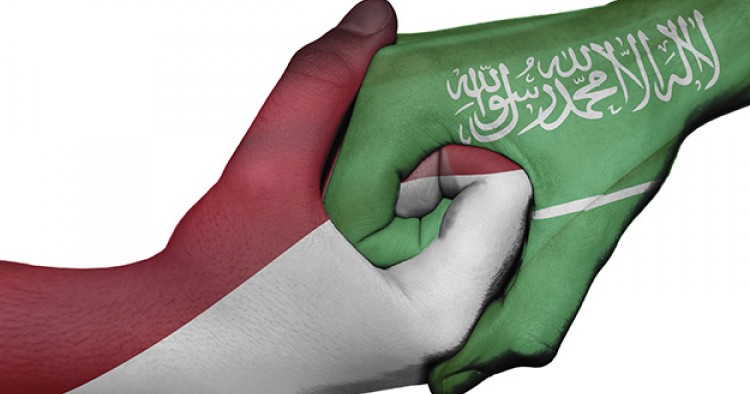 Religious interaction between the Arabian Peninsula and Indonesia has a long history. Traders and missionaries from the Peninsula were the primary sources of Islam to the archipelago. Saudi Arabia’s Islamic credentials in Indonesia have been strengthened by the fact that Mecca and Medina are part of the Kingdom. The pilgrimage to Mecca (the hajj), one of the five pillars of Islam, has long been an important attraction to Indonesian Muslims.[1] However, this analysis will concentrate on more recent Saudi efforts to export its more narrow and puritanical brand of Islam to Indonesia.

Before proceeding, let me offer three caveats. First, long before World War II there were resident colonies of Indonesians in Mecca and Medina that had some influence at home, although never as strong as Al-Azhar in Egypt. Second, there have been actors seeking to disseminate similar interpretations of Islam in Indonesia from other Middle Eastern states, such as Yemen and Qatar. Finally, Saudi religious ideas have not always come directly from the Kingdom to the archipelago. Interactions between Indonesians and those expressing Saudi interpretations of Islam have taken place in other venues. Thus, Indonesians fighting in Afghanistan in the 1970s came in contact with Saudis who influenced their concept of Islam.

Saudi efforts to export its interpretation of Islam to Indonesia coincided with what has been termed “the Islamic Revival” in Southeast Asia. This was a period of increased awareness of Islamic principles, the introduction of a more modest dress code, greater attention to Islam by politicians, the expansion of Islamic thought and organizations into university life, and efforts to practice Islam in a more disciplined manner. Islamic political parties in Indonesia did not experience a significant impact because this was during the period when the “New Order” government of President Suharto had severely weakened their power.

The Saudi mission was launched amid other events and imports from the Middle East that affected the religious perceptions of Muslims in Indonesia, including continued public antagonism against Israeli policies in Palestine, the Soviet occupation of Afghanistan— involving a small but later influential group of Indonesian fighters—and the Iranian Islamic Revolution, which was seen as a victory of Islam over the West. This was also an era when a wide range of Middle Eastern activists and scholars had their works translated into Indonesian, in many cases with Saudi funding. This came at a time when Indonesia had advanced significantly educationally, providing a population capable of reading the material made available to them. Of particular importance in Indonesia among these translations were the works of Sayyid Qutb, Hassan al-Banna, and Ali Shariati.

The religious framework brought by the Saudis has been termed Wahhabism and Salafism. Although the use of these terms has been rather flexible in Indonesia, there are differences between the two, and Salafis generally do not wish to be termed Wahhabi. However, Wahhabis look to the teachings of Ibn Abd al-Wahhab, who himself promoted Salafi tenets. This is not an organization with a recognized leader. Rather, it can be better envisioned as an ideology and methodology. Both Salafism and Wahhabism propagate an Islam based on what their adherents see as a more perfect and unsullied religion of the early years of the faith. Both foster a more puritanical society devoid of what is regarded as un-Islamic accretions to the religion. Neither Salafis nor Wahhabis endorse religious and political pluralism, and both tend to reject Westernization and intellectualism. However, that does not mean that they are not prepared to employ modern technology to spread their ideology.

Salafis are a small but growing element of Indonesia’s population, although aspects of their religious and social tenets have been incorporated into mainstream interpretations of the faith. There are a number of fault lines within the Salafi movement. A key one is in regard to political activism. While the majority seeks to be apolitical and rejects efforts to challenge state authority, there have been adherents of political activity. Small offshoots claiming Salafi tenets have been involved in violent Islamic militancy. In Indonesia, these have included leaders of militant groups, such as the now defunct anti-Christian Laskar Jihad and the transnational organization Jemaah Islamiyah. There has been conflict between those supportive of the Saudi government and its critics. In addition, “purists” have rejected religious pluralism. They do not support working with Muslim organizations that they characterize as promoting devious Islamic teachings or that they consider to be “too political.” One such group is Darul Islam, which called for an Islamic state in the 1950s and 1960s and still has some influence on Islamic militants. Some members criticize contemporary activist Islamist political parties such as the Partai Keadilan Sejahtera (Prosperous Justice Party or PKS).

Saudi Arabia’s financial foundation for its proselytizing was reinforced by the largesse that came after the oil crisis of 1973. Major aid did not flow into Southeast Asia until the 1980s, although support for religious projects in Malaysia can be found during the 1960s.

In Indonesia there have been several conduits for Saudi religious aid, although by 1978 worry about the Kingdom’s impact led to the requirement that all external aid come through the Jakarta government. Saudi providers have included the Saudi government, individual Saudis, and Saudi religious foundations and charities. A major example of the last category was Al Haramain, which was closed in 2004 after charges that it was a conduit to militant Islamic groups were brought against it, though it continued in operation for some time afterward. This funding had been for the development of religious schools, scholarships for students seeking to enter educational institutions in Saudi Arabia, religious books and other printed material, the building and refurbishing of mosques, and financial aid to individuals and organizations as diverse as the more modernist Muhammadiyah and the more traditional Nahdlatul Ulama. Aid was often not tied to specific Wahhabi or Salafi goals, but was placed in order to strengthen Islam within the country. This was even truer after 9/11 when the Saudi government sought to dampen more radical teachings and even supported Salafi writings that termed terrorism un-Islamic. This has not stopped violence against Indonesian Muslims perpetrated by Salafis.

The most well known organizations that serve as primary conduits of Saudi funding in Indonesia are the Dewan Dakwah Islamiyah Indonesia (the Indonesian Society for the Propagation of Islam, or DDII) and Lembaga Ilmu Pengetahuan Islam dan Arab (the Institute of Islamic and Arabic Studies, or LIPIA). The DDII was founded in 1967 by Mohammad Natsir, the former leader of the Masjumi Party and a linchpin to the Islamic revival and interaction with the Middle East. It grew into a conservative organization with strong anti-Shi‘a, anti-Christian, and anti-Ahmadiyah views. This fit neatly into the Saudi agenda, which has sought to counter Shi‘ism, particularly after the Iranian Revolution. At that time, Iran offered scholarships to Iranian institutions and supported the wide publication of Shi‘i authors such as Ali Shariati, which underscored the successes of the Iranian Islamic experience and 1978 revolution. It is therefore not surprising that Saudi aid to the DDII increased greatly during the 1980s.

The DDII has built mosques, hospitals, and orphanages, distributed Qur’ans and other Islamic materials, aided local religious schools, and trained religious leaders. It has fostered Islamic student organizations and made available scholarships to Saudi Arabia and other Middle Eastern universities. Students studying in the Middle East are counseled before and during their experience and are visited by DDII representatives. The DDII has also sought to network with other Islamic organizations at home and abroad, including Muslim Brotherhood groups, international Islamic youth groups such as the World Assembly of Muslim Youth (WAMY), and even elements of Jemaah Islamiyah.

The Saudis founded LIPIA in 1980 to further educate Indonesians in their interpretation of Islam. The LIPIA is linked to the Imam Muhammad Ibn Saud Islamic University in Riyadh. Its lecturers tend to be Saudi or Middle Eastern, as has been its leadership. LIPIA has been active in bringing promising students from its own institute and other Indonesian universities to Saudi universities.

Returning graduates have been at the core of the effort to expand the Saudi interpretation of Islam in Indonesia. Graduates tend to gravitate toward mosques in urban areas and in cities with universities, such as Yogyakarta and Semarang, where their ideas have resonated with younger adherents to the faith. However, these returnees have normally not been advocates of violent militant Islam. Salafi militants have usually come through interaction with other radical groups or individuals. In addition, though there are frequent charges that particular religious schools teach radical Islam and authorities warn of an increase in militancy, only a small percentage of the approximately 13,000 pesantren (Islamic boarding schools) in Indonesia promulgate a militant version of Islam.[2]

Though Saudi Wahhabi/Salafi tenets have increased in influence in Indonesia, there are a number of significant impediments to their widespread expansion. Although in decline, in Indonesia there has been a tradition of syncretism, incorporating local beliefs into Islam, particularly in rural areas. These do not fit the Saudi antipathy to “un-Islamic” accretions to the faith. Secondly, although it is a generally false perception, many Indonesians have equated Wahhabis and Salafis with fanaticism and militancy and have been wary to identify themselves with them. Statements from the press and local authorities have reinforced negative attitudes. Mass organizations, such as the Muhammadiyah and Nahdlatul Ulama, also have attempted to weaken Salafi influences in mosques and schools. Third, some Indonesians have not been comfortable with the “Arabization” of Indonesia, and the Wahhabi/Salafi movement appears to symbolize that perception. Attitudes toward the Saudis have not been helped by incidents arising from the implementation of strict Islamic law in Saudi Arabia, such as the beheading of an Indonesian maid for killing her allegedly abusive employer.[3] Finally, although the country is some 88 percent Muslim, the dominant political parties have tended to have secular agendas, and many of their members have been wary of Saudi influence on the country’s religious environment.

[1] Over 300,000 Indonesian pilgrims went to Mecca in the interwar period. In recent years the hajj quota from Indonesia has been 216,000, though it was temporarily cut by 20 percent in 2013 and 2014 due to work on the Grand Mosque. For an excellent analysis of the hajj from Southeast Asia, see Eric Tagliacozzo, The Longest Journey (New York: Oxford University Press, 2013).