SCAF and the Muslim Brotherhood 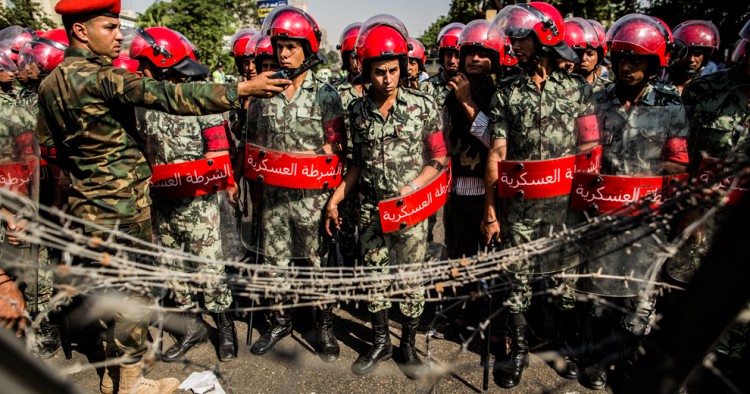 Since the most recent but now routine eruptions of violence between street protesters and Egypt’s state, speculation has swirled about the durability of the pact between the Muslim Brotherhood and Egypt’s armed forces. The elected civilian president, Muslim Brother Mohamed Morsi, has gone to great lengths to assure the Egyptian generals that he fully accepts the economically powerful military that not only survived the dramatic overthrow of longtime dictator Hosni Mubarak but also expanded its influence by leading the 17-month return to civilian rule.

Such unconditional assurances from the generals, however, have not been reciprocated. The Egyptian press reports how the Supreme Council of the Armed Forces (SCAF) meets without its “nominal head, President Mohamed Morsi,” while other papers openly call for a new military intervention. The military itself issues ambiguous statements about intervention and then posts messages on social media sites to combat rumors. For instance, on its official Facebook page,[1] a military spokesperson denied that SCAF views the removal of top generals as “suicide” for Morsi after it was rumored that the president was considering changes to the military command structure. And according to NBC journalist Ayman Mohyeldin, a post on another Facebook page close to the armed forces recently denied that the military would undertake a “coup.”[2]

The minister of defense, Abdel Fattah al-Sisi, who Morsi appointed through consultations with SCAF in August 2012, has also remained publicly noncommittal. Generally supportive of the president, al-Sisi issued a statement in January 2013 as lawlessness gripped parts of Egypt after a court ruling concerning the 2012 soccer massacre in Port Said sentenced 21 people to death. Al-Sisi said, “The continuation of the conflict between the different political forces and their differences over how the country should be run could lead to the collapse of the state and threaten future generations.”[3] Such an ominous statement may have been intended to frighten the population into accepting the transformed, but hierarchically unchanged, ruling coalition.

Yet al-Sisi’s statement‑‑that the very existence of the state is questionable if disorder continues to reign‑‑implies that the military is obliged to intervene. He thus chooses an ambivalent stance, and one that recognizes the divisions between the president and the armed forces. As for Morsi, his public statements tend to downplay any tension. In his national televised interview of 25 February Morsi pledged his loyalty and “love” to the military and the intelligence services while also promising to protect them, ostensibly from the protestors’ wishes for a reorganization of the state bureaucracy. He also declared, “There could never be disagreement between the armed forces and the presidency because the president and the armed forces are not two factions, they are one.”[4]

But there is something on which Morsi, al-Sisi, other Egyptian elites, and the mainstream Western media can all agree. They all view the protestors as impatient and possessing an insatiable desire for rapid change that could break Egypt’s state or political system. Their desire is for the protests to stop so that the formal politics of elections, IMF deals, and diplomatic visits can occur as life returns to normal. Such a portrayal, however, confuses the process of change and conflict that we are witnessing.

The state is not fragmenting because protesters are making it weak. It is increasingly weak because rather than reform it, the military and civilian elites in the post-Mubarak period have heard the calls to reform the state and have chosen not to heed them. Rather than formal processes and electoral politics determining the transition’s way forward and strengthening the state, these spectacles are inherently undermining it. The crux of the problem remains that people mobilized to remove Mubarak in January and February 2011. They sought not only his disposal but also a profound restructuring of the deep state and the exclusivist practices that instruct Egyptians to obey rather than participate in the country’s future.

By simply ejecting Mubarak, SCAF led a transition that preserved the surviving unreformed state bureaucracy while granting elections. Not only did this stitch continuity into the bureaucracy’s practices, it meant that whoever won elections would have to compromise with the bureaucracy rather than break with it and work toward the demands of the protesters. Thus, suggesting that the Muslim Brotherhood or the president are islands unto themselves is misleading. They are not detached from the military or any other part of the state bureaucracy at this point. They have become enmeshed into the fabric in ways that will discredit the 85-year old organization in the long term.

Since Morsi became president, constant whispering has suggested that the president is not in control. Morsi’s advisors and spokespeople refute the allegations by repeating that he possesses the power that the constitution promises the office. Yet Morsi’s early battles with Field Marshall Tantawi, collisions with the judiciary, and the partisan implementation of last November’s constitutional declaration have left him weaker and more dependent on the state bureaucracy. This fragmentation is a function of the type of elitist transition the military pursued.

It is thus more realistic to understand the Muslim Brotherhood and the military as both pursuing a similar agenda. There is, for now, Plan A: This is the maintenance of the current arrangement as consummated in the new, rushed constitution of last December. Specifically, this means that the military remains a dominant force with only the most minimal levels of accountability to any elected presidents or parliament (irrespective of the political force from which they emerge). In particular, the military expands its control over its functions through the new National Defense Council, experiences no civilian budgetary oversight, has the ability to employ military trials against civilians, and is guaranteed its substantial economic holdings and businesses. In return, the Brotherhood or any other civilian group that accepts this arrangement can oversee the running of the state and elections.

The military high brass claims that it wishes to fade into the background and away from the glare of the political limelight. Yet issuing ambiguous statements about potentially intervening that are then denied though media outlets only injects uncertainty and invites more unrest. This is also not a sign of neutrality, but is a decidedly political act. It lets the Brotherhood know that while the military is committed to Plan A, it has a Plan B that is available to no other organization in the country.

Plan B is tossing the last 27 months away and redrawing the transition from scratch. But this remains an option of last resort. It is doubtful that the military wants to return to governing an Egypt that has slipped so far down the hole. Tourism has ceased, foreign direct investment is minimal and is mainly concentrated in the military’s economic sector, and the best that Morsi can offer is elections—now suspended—and an IMF agreement. It is hard to see the military performing better than the Brothers.

While the generals shrug their shoulders as protesters continue to rail against the president, they seem to be wagering with the same calculation as the president’s men.  They believe the coalition of the Brotherhood and the military can outlast the mobilization. Yet this belief is a recipe for fragmentation of a political order, not the rebirth of a nation, and is caused by the fact that Egypt’s political and military elites would rather sacrifice their whole hand than capitulate to citizens demanding more freedom, economic growth, and social equality.

The problem in Egypt has never been an absence of the state. Indeed, there has always been a suffocating amount of stateness. The fact that continuity prevails in the state despite a change of actors not only shows just how impressive the population’s ongoing revolutionary activities are, but also how lingering continuity is producing these revolutionary activities. In the meantime, while the military and its loyal and bounded civilian clients continue to conduct a type of exclusivist political engineering against a population signaling a desire for otherwise, Egypt’s central problems remain cans that are kicked down the road. Thus, whether the issue is security in Sinai, a deteriorating economy, or a political arena that is in desperate need of an inclusive reboot, no political or military forces seem to have a plan to tackle it. The fraught alliance between the Muslim Brotherhood, the state bureaucracy, and Egypt’s armed forces is not untenable because of the instability among them. It is untenable because Egypt has changed and the elites in these institutions have not.