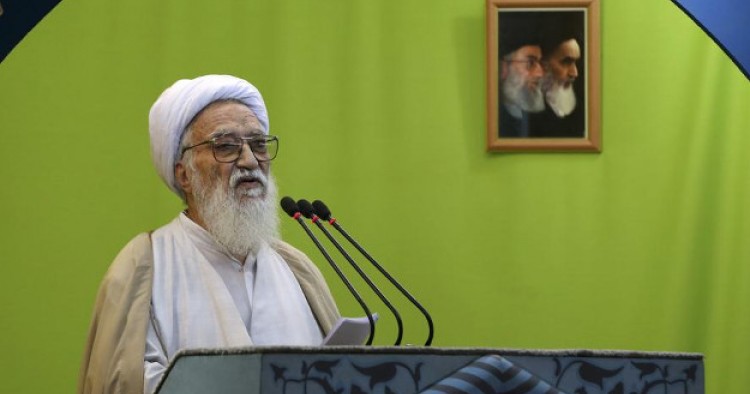 A senior Iranian cleric warned today that “no American place in the world will remain safe if the United States commits a mistake against Iran.” Ayatollah Mohammad Ali Movahedi Kermani, an interim Friday prayer leader of Tehran, told a large gathering of worshippers today that the United States aims to weaken the will of the Iranian people through economic pressure in order to get them to oppose the regime. But he maintained that the Iranian people have “resisted” against the United States and its allies for more than three decades despite increasing pressure and will continue to do so. Kermani, who is also the secretary-general of the Combatant Clergy Association, stressed that it is not surprising that Washington continues to impose sanctions on Iran because it oppsed the Iranian regime.  “But what is surprising,” he added, “is that some weak-hearted individuals say America is powerful and Iran lacks the ability to confront it, so it should give up resistance and negotiate and make a compromise,” he referred to those in Iran who prefer engagement to confrontation with the United States. “They either have not seen or do not believe in resolute promises in the Quran that victory is in the hand of God.”

Kermani credited Supreme Leader Ali Khamenei’s “courage and strong will” for keeping Iran safe. “When [Russian President Vladimir] Putin was coming from the airport to Tehran, he went directly to see the leader and was impressed with him,” he claimed. “The people do not have an iota of trust in America, its allies and its words. They understand America’s track record of treachery very well. It was expected that the J.C.P.O.A. would remove all sanctions, but we see that sanctions are constantly added,” he said in criticism of the nuclear agreement Iran signed with world powers two years ago.

Comment: Hardliners and Islamic Revolution Guards Corps (I.R.G.C.) leaders increasingly criticize the Rouhani government for having trusted the United States and signed the nuclear agreement. They point out that Washington has recently imposed new sanctions on Iran and the nuclear deal has not benefited the country.

Although most of nuclear-related sanctions on Iran were lifted in January 2016, remaining U.S. unilateral sanctions and the Trump administration’s tougher approach vis-à-vis Tehran have dissuaded many foreign companies to do business with Iran.

During his reelection campaign, President Hassan Rouhani pledged to make efforts to remove remaining U.S. sanctions against Iran if reelected. Hardline media strongly criticised him at that time; and now that Rouhani has secured a second term, they continue to criticize the nuclear agreement and warn against any further engagement with the United States.