Space Matters: Civil Society in Indonesia at the Crossroads 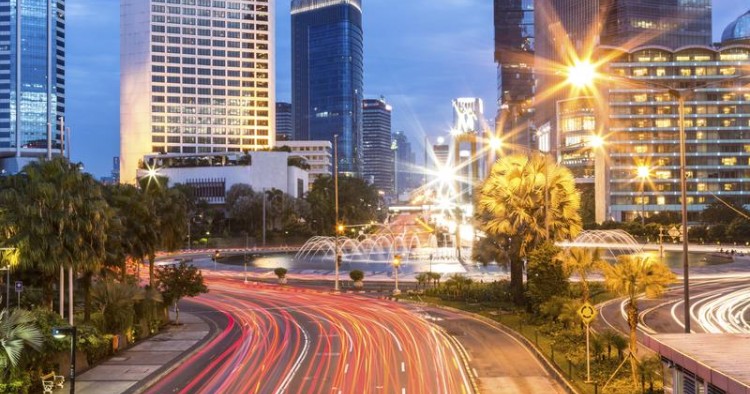 Two decades have elapsed since the Reform Movement's massive public protests chased the Suharto regime from power, marking the beginning of Indonesia's democratic transformation. Since then, decentralization has led to dramatic changes in the country's urban landscape, in turn altering the spatial context within which Indonesian civil society operates.

Comparisons to Law 9/1998 on Freedom of Speech were immediate. Law 9/1998—aimed at countering repression—was enacted shortly after the Reform Movement overthrew General Suharto in waves of street protests involving thousands of people, most of them students. Chapter 9 of Law 9/1998 stipulated that public expressions could be held in the form of demonstrations, convoys, public meetings, and public speeches. Law 9/1998 listed several places where demonstrations were barred, namely the Presidential Palace, prayer houses, military facilities, hospitals, airports, seaports, bus terminals, train stations, and “national vital objects.” Nevertheless, the text of the law allowed room for interpretation by demonstrators based on their agendas. In marked contrast, the newly enacted Gubernatorial Regulation is considerably more restrictive; for example, it forbids convoys on the streets and requires organizers to obtain a permit from the police in order to stage a protest.[1]

Although the effort to regulate protests in Jakarta and the controversy surrounding it began only recently, the signs have been building for at least a decade. In 2014, I published an article about the evolution of strategies of three civil society activist groups. As early as my first interviews with members of these organizations in 2007, they had indicated that protests were less likely to ignite the change they expected.[2] Despite vivid recollections of the crackdowns on protests before 1998, and the cheers of joy on the rooftop of the Parliament Building occupied by protesters on the day of Suharto’s resignation speech on May 28, 1998, the urban landscapes that form the context for social and political activism in Indonesia have evolved.

The opening of urban public spaces for demonstrations in 1998 saw a proliferation of street protests. Although demonstrations gradually became smaller in terms of crowd size, especially compared to the earliest years of the post-Suharto era, they grew more frequent. In 2007, photojournalists I interviewed claimed that there was at least one demonstration every day, which required them to determine which demonstrations were “more newsworthy.”[3] Meanwhile, public sentiment, which had generally been favorably disposed toward protests and protesters, appeared to change. Passersby at the popular protest site Bundaran Hotel Indonesia, for example, expressed their suspicion that demonstrators were either indolent or had been paid to protest.

The declining public sympathy toward protests and protesters is inseparable from the development of Indonesia’s urban landscapes where the demonstrations were staged. Protesters utilize urban public spaces as "megaphones" to widely broadcast their agendas.[5] However, these megaphones are situated within massive commercial developments that have emerged from an urban planning process that has, in recent years, devolved to the cities greater authority in determining their development trajectory. The growth of Jakarta is a case in point. Between 2003 and 2010, no less than 21 new mega project were approved.[6] Consisting of shopping malls and residential, commercial, and leisure facilities, these projects expanded commercial spaces in Jakarta by 33.2 million square meters. In Bundaran Hotel Indonesia, more high-end developments have occurred in the late 2000s with the makeover of historical Hotel Indonesia into Grand Indonesia Kempinski in 2007 and the expansion of Plaza Indonesia—consisting of a five-star hotel, shopping and entertainment center, office building, and residential facility—in 2009.The frequency of demonstrations increased along with the growth of these spaces, of consumption, signifying the disjuncture between urban developments that form the context of place with the function of urban public spaces as protest megaphones.

Interviews with activists conducted in 2007 indicated concerns about university students’ declining desire to be politically active. Sinnal Blegur, a human rights activist, voiced her disappointment with students’ lack of solidarity toward other students who were persecuted because of their social and political activism. Karlina Supelli, an activist from the 1998 Reform, thought that when spaces of public expression were opened, demonstrations became less spectacular and thus received less attention. The government’s apparent indifference towards these public demonstrations led to changes in social movement strategies, particularly by groups dealing directly with the material conditions of the populations they serve, such as women’s cooperatives and the urban poor.

However, despite the waning enthusiasm for public protests aimed at advancing the social agenda, Indonesian civil society activism remains resilient, and indeed vibrant. The surge of activism during the polarized presidential election campaign in 2014 demonstrated that activist networks could mobilize on a large scale, especially in the face of a “common enemy.” During the 2014 election season, that common enemy was Prabowo Subianto—an ex-military general-turned-entrepreneur, whose reputation had been tainted by lingering suspicion about his involvement in human rights abuses in various areas of the country during his military career. Most human rights activists who had been involved in the 1998 Reform Movement, therefore, mobilized behind Subianto’s electoral opponent, presidential candidate Joko “Jokowi” Widodo.

Jokowi’s backers varied in the reasons for and intensity of support, ranging from those who fully believed in his capacity to lead as president, to those who simply thought he was the best choice from among a cast of poor options. Jokowi supporters’ strategies were loosely coordinated by volunteers, who actively mobilized despite a lack of support from his own political party. The highlight of Jokowi’s campaign was the GBK Concert (Konser GBK / Gelora Bung Karno, Bung Karno Stadium) on July 5, 2014, staged by tens of thousands of his supporters and hundreds of artists. Sinnal, who had been one of the most active members of Jokowi’s cadre of volunteers, described her experience as memorable and the event itself as a “make or break” moment in their effort to garner public support for Jokowi’s election.

The mobilization in 2014 for Jokowi’s election neither reflected nor produced a unified civil society. On the contrary, the wide spectrum of supporters included figures who had previously been targets of activists’ protests, such as Wiranto, Hendropriyono, and Sutiyoso.[7] Nevertheless, the volunteers had to work together during the campaign, one of whom Hendropriyono’s own son. Less than one year into Jokowi’s presidency, various activists questioned Jokowi’s choice of Sutiyoso as the head of the intelligence agency[8] as well as the deal with Malaysia’s Proton that allegedly served Hendropriyono’s business interests.[9]

Nevertheless, it would premature, at best, to declare that civil society in Indonesia has disintegrated. Rather than assuming the nation-state as the scale of civil society mobilization, it would be more illuminating to focus attention on the municipal level. Since decentralization in Indonesia started more than a decade ago, there have been more issues that can be addressed locally, particularly development concerns that are closer to citizens’ daily experiences, affecting their livelihoods and spaces for cultural, social and economic activities. Social movements can be rooted in local settings, but can also be linked to national and international networks. 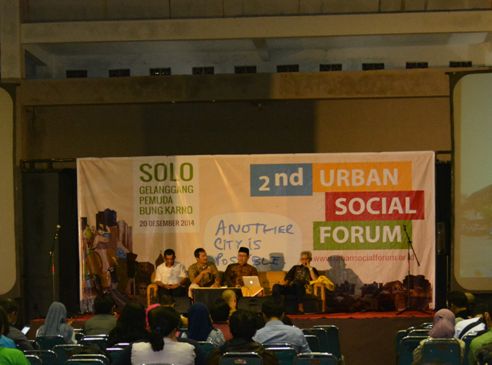 There are numerous locally-based civil society actors working to address various social concerns. They include NGOs that work with the urban poor, such as the Urban Poor Consortium in Jakarta and their subsequent networks,[10] as well as organizations such as the Community Architects (Arsitektur Komunitas) in Yogyakarta, which offers a non-formal platform for architects and professionals to work and exchange information with urban village communities.[11] Other groups range from platforms for arts activities for adults and children, to neighborhood cooperatives, to mobilizations against development. The ForBali movement—composed of traditional fishermen, indigenous residents, artists, environmental activists, and others—is actively involved in a campaign against reclamation.[12]

These urban social movements have also spurred a national platform, the Urban Social Forum.[13] The forum is facilitated by the Kota Kita Foundation, an NGO that started in Solo during Joko Widodo’s time as mayor to facilitate communication between government and local communities through mapping problems and potentials of each district to inform the participatory budgeting process.[14] Even before the Urban Social Forum was established, there were active networks of urban poor activists through UPLINK (Urban Poor Linkage), which was founded in 2002 as a coalition of NGOs and community-based organisations (CBOs) nation-wide and meets annually.[15]

The Jakarta provincial government announced on November 6 that Pergub 228/2015 would be revised just one week after it took effect. The result was Pergub 232/2015, in which space restrictions generally reverted to Law 9/1998 and the ban on street rallies was lifted. However, just a few days later, the police informed participants in the weekly Kamisan protest across from the Presidential Palace that it would be the last street demonstration on the premises.[16] This is in spite of the fact that human rights activists and relatives of victims have staged Thursday protests on over 400 occasions since 2007 (Photo 2), and that their cases, including the 1965 massacre, have not yet been satisfactorily resolved. The warning to remove Kamisan from the Palace area came amidst the controversy over the Gubernatorial Regulation and the International People’s Tribunal in The Hague on the 1965 massacre.

These recent developments underscore the continuing importance of urban spaces and their contestations in constructing political images and positions, and reveal the growing division between convenience and spatial justice­­: limiting public speech for the sake of convenience and increasing evictions in order to restore the elusive urban order.

When the online petition against Pergub 228/2015 was launched by KPRI, it struggled to reach the target of 500 signatures, registering just 359 signatures in five days. Did this lackluster result signify that residents of Jakarta today, unlike two decades ago, value convenience more than they do an engaged, vigorous civil society? This question and many others related to the rise, current dynamics, and trajectory of Indonesian civil society deserve much more careful treatment than they have received. In turn, greater attention to the vast and differentiated array of social movements operating in many localities at the grassroots level is needed in order to gain a fuller understanding of Indonesian civil society.

[6] Suryono Herlambang, “On City Commercialization: A Preliminary Research,” International Colloquium Series 2010: The Strategy and Concept for Sustainable Future of Jakarta.

[16] The traffic circle has historically been a place of political speeches, from Ganyang Malaysia in 1965, to the first protest by the Voices of Concerned Mothers in 1998, which snowballed into the Reform. It was also the place where people flocked to celebrate Joko Widodo’s presidential election victory on the evening of July 21, 2014See Rita Padawangi, “Reform, Resistance and Empowerment: Constructing the Public City from the Grassroots in Jakarta, Indonesia,” International Development Planning Review 36 (July 2014): 33-50; and Dandhy Laksono, “Yang Ketujuh” (Documentary Film, 2014).