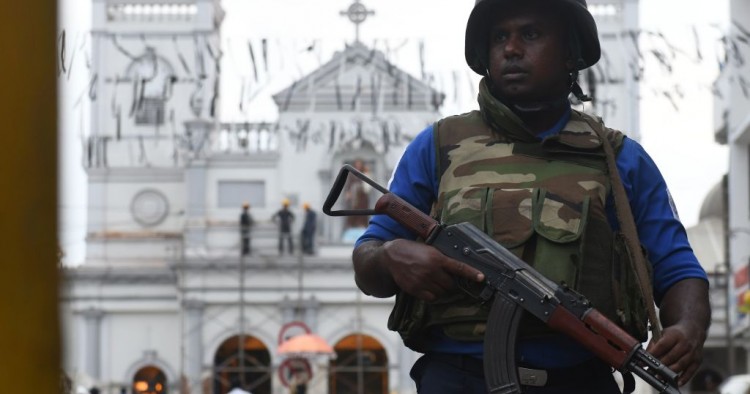 This essay is part of a series that explores the threat posed by the rise of ISIS to Asia and efforts that the governments of the region have taken and could/should take to respond to it. Read More ...

On Easter Sunday (April 21), a series of devastating terror attacks struck popular churches and high-end hotels in Sri Lanka. These tragic events rocked the nation and reverberated across Asia and beyond. This article discusses the circumstances surrounding the bombings and the authorities’ initial responses to them, and suggests ways to help reduce the risk of extremist violence in Sri Lanka.

The Easter Sunday Bombings and Their Aftermath

The coordinated suicide bombings that struck three churches and three hotels in Sri Lanka on Easter Sunday was probably the worst ISIS attack in South Asia. The revised official estimate put the death toll at 250-260.[1]  Soon after the bombings, a video emerged of the suspected ringleader of the attacks and seven followers — members of the National Towheeth Jamath (NTJ) — pledging their allegiance to ISIS. The Islamic State subsequently issued a formal communiqué asserting responsibility for the attacks.[2]

Following the lethal attacks there have been revelations of security and intelligence failures. The alleged mishandling of the attacks — including the failure to act on repeated warnings — has been attributed to a dysfunctional government and political infighting.[3] Both President Maithripala Sirisena and Prime Minister Ranil Wickremesinghe have individually tried to deflect blame by claiming that they were unaware of the warnings and possible attacks.[4] Wickremesinghe did acknowledge that his cabinet had received information pertaining to the attack but claimed the intelligence was not shared with him or other ministers.[5] This could be true given that the President’s political issues with Wickremesinghe are far from over. Sirisena, who heads the Defense Ministry, may have deliberately excluded Wickremesinghe and the cabinet from intelligence briefings.

Sirisena has taken a string of counter-terrorism measures, including requesting the resignation of Defense Secretary Hemasiri Fernando and Police Chief Pujith Jayasundara and calling for a complete security overhaul.[6] He has also ordered nationwide raids where security forces have arrested about 70 people, including the NTJ’s second-in-command, and are looking for more suspects linked to the bombings. The raids have uncovered bomb-making equipment, an Islamic State flag, and cache of explosives.[7] The damage control, however, is unlikely to quell public anger that the country’s security sector failed to prevent or, at the least, minimize the scale of the attacks.

The founder and leader of NTJ, Zahran Hashim, has now become the most notorious figure in Sri Lanka. Zahran’s radical ideology was no secret within the local Muslim community, as his vitriolic extremist sermons were widely circulated through videos on social media. Zahran also had a considerable YouTube and Facebook presence.[8] Religious leaders such as the head of the Shaikh Unman Waliyullah mosque had repeatedly warned the authorities about the spread of radical Islam. Even the Vice President of Sri Lanka’s Muslim Council, Hilmy Ahamed, had cautioned officials of Hashim’s hate rhetoric but his calls were not taken seriously.[9] The warnings from religious leaders indicate that most Muslims are moderate practitioners where they rejected the puritanical and austere Wahhabi brand of Islam that the NTJ proffered. They have also worked hard to ensure that young members of their community do not get carried away by extremist sentiments.

Prior to the attack, the NTJ had not been to have orchestrated large-scale attacks.[10] In fact, the group had been best known for desecrating Buddhist statues. Both domestic and international factors may have led to the group’s formation. The rise in Sinhala-Buddhist nationalism and a string of anti-Muslim riots could have driven marginalized members to join the NTJ. In fact, since 2012, hardline Buddhist groups such as the Bodu Bala Sena (BBS) have targeted the Muslim community despite a peaceful coexistence between the two religious groups for decades.[11] They even supported the government during the civil war, which provoked LTTE atrocities against them, including the horrific Kattankudy mosque massacre. In 2013, the BBS petitioned for the banning of halal products,[12] a move that sends out a strong message that Muslims are not welcomed in the country. Instances of mob attacks on mosques and destruction of shrines have also been reported,[13] undermining the religious freedom, security and dignity of the Muslim community. Buddhist fundamentalism could be seen as a broader phenomenon in a number of Asian countries including Myanmar and Thailand. Some have also argued that the exportation of Wahhabism in Sri Lanka, including many Muslims studying in the Middle East, may have a direct link to the formation of enclaves and perhaps radicalization.[14]

Pushed out of their caliphate, ISIS is trying to make its presence felt elsewhere — in this instance, by exploiting a largely amateurish group that nonetheless proved capable of inflicting horrific mass casualty violence. Hashim was one of the two suicide bombers in the Shangri-La hotel attack, a rather unusual move by a terrorist group’s leader. The Liberation of Tamil Tigers (LTTE), which invented the notorious suicide belt, was led by Vellupillai Prabhakaran, who encouraged young militants to become suicide bombers but never did so himself. Over time, other terrorist groups in Iraq, Turkey, Afghanistan and Pakistan used the deadly tactic but in none of them their leaders gave up their own lives.

Regarding why ISIS decided to wage an attack in Sri Lanka, some have speculated that the country was an easy target, given that security had relaxed following the decades-long civil war and that there is a pool of newly radicalized Muslims. As for the churches that suffered the attacks, they are popular in their own localities — Negombo, Batticaloa and Colombo’s Kochchikade district — and a high turnout of worshippers celebrating Easter would have been expected. Similarly, the three hotels that were attacked — the Shangri-La Hotel, the Cinnamon Grand Hotel and The Kingsbury — are among the country’s most lavish hotels which attract wealthy tourists and locals alike.

As the raids continue, the government needs to come to terms with the fact that it is once again confronted with the problem of radicalization. For years, the country’s political elite has deliberately ignored the extremist problem to prevent isolating the Muslim community who play a role in deciding the outcome of elections.[15] While the Muslim population is concentrated in coastal areas such as Ampara, the Sinhalese communities are dispersed across different provinces. Most Muslims, who usually vote as a bloc, voted for Sirisena in the 2015 Presidential elections. Both Sirisena and Wickremesinghe are aware that their chances of getting reelected are slim due to their substandard performance over the past four years. An opinion poll commissioned by the country’s Centre for Policy Alternatives in April 2017 showed that only 1.1% of the respondents held the view that the government’s performance has been excellent and does not require further improvement.[16] The government can no longer continue with such a negligible attitude for its own political survival.

The recent raids have disclosed that extremism is a much deeper and ingrained problem in Sri Lanka than most had realized. To address this problem, counterterrorism authorities in Sri Lanka need to explore ways to dissuade young people from joining radical groups and deradicalize those who have already succumbed to extremist ideology. The Sri Lankan authorities could look at some of the successful deradicalization programs in other countries, such as Singapore and Malaysia. In Singapore, the Religious Rehabilitation Group (RRG)[17] helps detained terrorists to counter their ideological misconceptions through rigorous counselling sessions. The program began in 2001 by a group of religious teachers who wanted to rectify the misconstrued interpretation of Islam by members of Jemaah Islamiyah (JI). Over time, the RRG and its members gained the trust of the JI detainees in order to correct their ideological misconceptions of religion. The program not only managed to reeducate extremists and reintegrate them into society but also helped to spread public awareness on the risks involved with radicalization.

Malaysia’s deradicalization program is based on the ‘Ahli Sunnah Wal Jammah’ approach — an Islamic jurisdiction that debunks the fanatical interpretations of Islam.[18] The detainees undergo individual and small group counseling under conditions that are deemed most conducive to dialogue. The program is believed to have a 97% success rate of rehabilitation.[19] In 2018, Malaysia offered to share its experiences of running its deradicalization program with other countries.[20]

While Sri Lanka had a rehabilitation program for former LTTE cadres, it was a military-run endeavor that excluded Tamil leaders from participation. To be successful, a deradicalization program must be viewed as a cooperative, supportive and non-military initiative that includes a religious leader. Rehabilitation involves not only a religious leader but also family members, social workers and teachers who provide a network of support. In response to the attacks, Bangladeshi imams, heeding a request by Prime Minister Sheikh Hasina, offered special prayers at mosques and delivered anti-militancy sermons to delegitimize terrorist groups that use religion to justify their violent narratives.[21] Similarly, the Sri Lankan government could  request religious leaders to issue a fatwa that would affirm that Islam is a religion of peace and declare that terrorism are “haram” or prohibited by Islam. Such a strongly-worded fatwa by respected religious teachers could help to erode the legitimacy of terrorist groups.

There is a grave risk that the Easter attacks, rather than to generate a creative and potentially effective counter-radicalization strategy, could devolve into an unfortunate and counter-productive backlash against the Sri Lankan Muslim community. There are already instances of Muslim homes and shops being attacked and members of the Ahmadi community seeking refuge in a mosque in Negombo.[22] The government has also banned face coverings for national security reasons, a move that is seen as targeting the Muslim community as a whole.[23] In the meantime, the Rajapaksas have latched onto the security and intelligence lapses to boost their own political fortunes. Former defense secretary Gotabaya Rajapaksa has announced that he will run for the forthcoming presidential elections on a platform of eradicating the menace of militancy[24] — a vow that is likely to strike a chord with many voters.