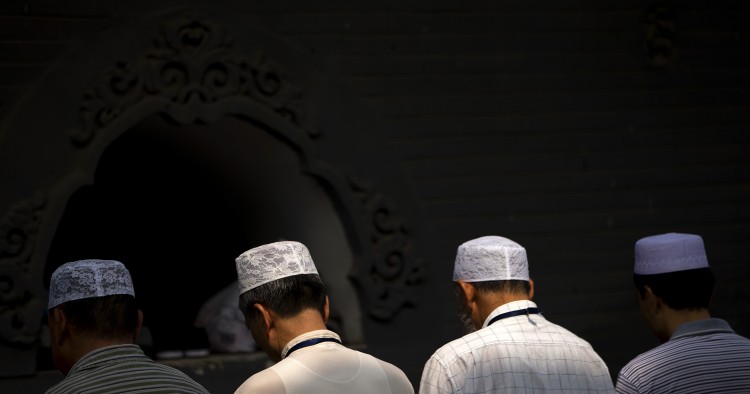 With the increased international media attention on the plight of the Uyghur Muslim minority in Xinjiang, Western news magazines such as The Economist and Foreign Policy have started to also focus on the Hui, or Chinese-speaking Muslims. The Economist article, “China’s Other Muslims” (October 8, 2016) depicts the Hui’s success as owing to their assimilation into Han Chinese culture and society. The article states that the Hui are counted as an ethnic minority only “because it says so on their hukou (household registration).” This imagined conception of the Hui leads to other fantastical representations: Hui are “rarely to be victims of Islamophobia,” can “negotiate around the grey areas of China’s political system,” serve as “middlemen between China’s state enterprises and firms in China Asia and the Gulf,” and are even able to “practice Islamic law (sharia) to a limited extent.”

Unlike the Uyghurs’ recent incorporation into the Chinese state around 1750s, the Hui have resided and intermarried in China since the Tang dynasty (618-907). The historic Hui presence generates hybridity in their race, language, religion, and literature; as a result, modern Western scholars often deploy hyphenated terms such as “Sino-Muslim,” “Confucian Muslims,” and more recently, “Muslim Chinese” to refer to them. It is possibly because of this phenomenon that the Hui have been portrayed as the best example of civilizational dialogue between (neo) Confucianism and Islam, and thus promoted by contemporary Confucian scholar Tu Weiming and his Islamic counterpart Seyyed Hossein Nasr.[1]

Compared to the Uyghurs, the Hui have to some degree been Sinicized simply because they have had a long history of interaction with the Han. However, it is ahistorical to attribute the success of the Hui to their cultural assimilation. Historically, it was the political and legal status of the Hui (i.e., making the Hui into Chinese political subject or min) that provided them with equal access to Confucian exams and civilian posts. Having been, to some degree, enculturated, the Hui nonetheless were victims of Hui-phobia by the Han majority — long before the Uyghur were included into China and long before Islamophobia came to be known to the West.

Anti-Hui political, social and literary discourses were so widespread during the Ming-Qing transition, and especially during the early eighteenth century, that they came to the attention of the Kangxi, Yongzheng, and Qianlong’s imperial courts about Hui-phobia. The Hui literary practices at this time, or so-called Han kitab (or Chinese books) genre, was a direct response to Han’s Hui-phobia. Even worse was the Han officials’ proposed legal discrimination against the Hui in the eighteenth century on collective violence. In contrast, the newly included Uyghurs during the Qing period enjoyed Uyghur cultural and Islamic legal autonomy under local beg headmen.

One key indicator of difference between the Hui and the Uyghur is the use of the term min, or political subject. The Hui have been politically and legally identified as Hui min, equal to Han min, on an individual basis since the Ming dynasty; today, they are collectively identified as an ethnic group. In fact, the Hui were among the earliest Chinese political subjects to constitute a hyphenated category (i.e., as Hui-min, combining (ethnic) Hui with (legal) min). The success of the Hui (as well as other non-Han groups) lies in their combination of being Hui and being min — China’s political subjects under regular governance and equal treatment.Today, there is a relative difference between the Uyghurs and the Hui in terms of access to social resources and cultural interaction. But that is not the point.

The key to the Hui’s success is the fact that they have resided in interior regions and under regular governance, making it harder to openly discriminate against them. Despite Chinese political, territorial, and military expansion in Xinjiang dating back to the mid-eighteenth century, the Uyghur region has lacked interior-land and regular governance since the Republican period. Amidst international turmoil and politics in Central Asia (ranging from the 19th-century “Great Game” to the collapse of the Soviet and the formation of Central Asian republics to the United States post-9/11 “anti-terror” war in neighboring Afghanistan), Xinjiang warlords, military units, and security apparatus alike have exploited security and sovereignty issues to “irregularize” the “frontier” region and sensationalize the Uyghur issue.

The Uyghurs, however, were administered by the Qing only since the 1750s, under local autonomy. The political-legal status of min was not granted to individual Uyghurs before or after; not until the early twentieth century was Uyghur regarded as an ethnicity. Lacking min, Uyghurs had no individual political and legal status. Deprived of min and thus not treated equally, Uyghurs became aggrieved. Meanwhile, for the same reason — Uyghurs not having been accorded min — state officials became increasingly concerned about Uyghur ethnic nationalism.

The recent Chinese discourses on second-generation theories of ethnicity that highlight individual citizen rights while diluting ethnic collective identity and rights attempt to trade collective ethnic culture and identity for individual political-legal rights. However, as the Hui min case indicates, to be Hui and to be min is not contradictory but complementary. Hui ethnic-religious culture and the legal status min can be hyphenated: Hui-min. By extension, other peoples, be they Han or Uyghur, can combine their ethnic-cultural identity as a specific group (or zu) with state identification as equal political subject (min). This combination will nicely balance the relationships among individual ethnic members, the collective ethnic group, and the state. Thus, the current Chinese ethnic paradigm needs a return to the Qing population politics in interior regions that designated a subject population as a unified subject group (min) while respecting its cultural-ethnic affiliation — as in the case of the Hui. The latter’s success lies not in cultural assimilation, but in a healthy and balanced relationship between the Hui and the state.  The Uyghur and other non-Han groups would have succeeded, too, had such a relational approach been extended into the “New Territory” or Xinjiang.