The Syrian Refugee Emergency: Implications for State Security and the International Humanitarian System 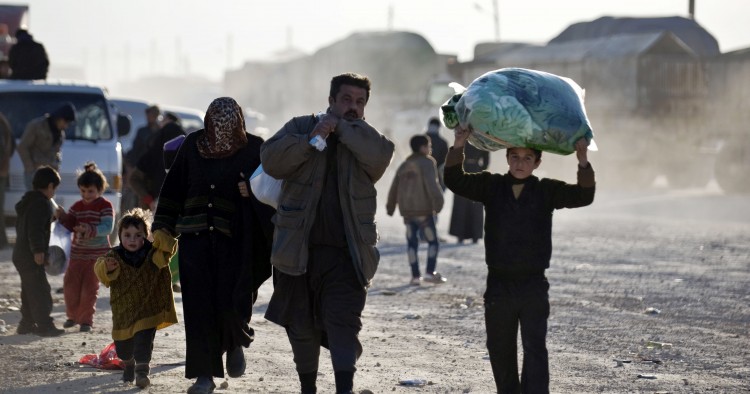 The international community has been affected by events occurring in the Central African Republic, Iraq, Nigeria, South Sudan, Syria, Ukraine, and Yemen. In the past five years, the world has witnessed a spate of armed conflicts, all of which have forced large numbers of people to leave their homes and to look for safety elsewhere. At the same time, the longstanding violence in countries such as Afghanistan, the Democratic Republic of Congo, Myanmar, and Somalia has continued unabated, making it impossible for people who have fled from those countries to return to their homes.

As a result of these developments, worldwide displacement is now at the highest level ever recorded. Ten years ago, the global number of refugees and internally displaced people stood at around 37 million.[1] It has now soared to over 60 million—and that figure does not include those people who have been uprooted by sudden onset natural disasters and the longer terms effect of climate change.[2] While international attention is currently focused on the movement of refugees to Europe, more than 85 percent of the world’s uprooted people are to be found in developing countries, around 15 percent of them in the Middle East and North Africa (MENA) region.[3]

The Syrian refugee emergency has a number of important characteristics, the first of which is its sheer scale. Around five million refugees have now been registered in the MENA region, the majority of them in Turkey, Lebanon, Jordan, Iraq, and Egypt.[4] Within Syria itself, up to six million people have been displaced.[5] The number of Syrians seeking asylum in Europe stands at over 363,000.[6]

In addition to its unprecedented scale and scope, the Syrian refugee crisis has erupted with unusual speed. In the first two years of the conflict, the movement of people out of Syria remained very modest. That trickle became a flood as the war intensified. Between the middle of 2013 and the middle of 2015, the number of Syrian refugees jumped from 750,000 to five million, meaning that an average of almost 7,000 people fled from the country every day during that two-year period.[7]

Another unusual characteristic of the Syrian refugee emergency lies in the fact that only a very small proportion of the people who have been forced into exile, around 10 percent in total, have been accommodated in refugee camps.[8] Instead, they have taken up residence in cities, towns, suburban areas, and villages across the region, living alongside and in many cases competing for resources with the local population.

The massive scale of the Syrian refugee emergency has necessitated an equally large humanitarian response. The U.N. appealed to member states for $7.3 billion in new funding for 2016,  the largest in humanitarian history.[9] Refugee-hosting countries in the region have been obliged to devote significant resources to the emergency. Turkey, for example, estimates its total expenditure to date to be in the region of 7.5 billion dollars, with a monthly expenditure of some 500 million.[10] States and private sponsors in the Gulf have also made a substantial commitment to the humanitarian response, although the exact amount is difficult to calculate, as much of it bypasses the United Nations’ coordination structures.

While states such as Jordan, Lebanon, and Turkey have been very generous in opening their borders to refugees, they have started to introduce many more restrictions to entry, and have been very reluctant to allow Syrians to join the labor market. At the same time, donor state fatigue has set in, leading to cuts in the level of humanitarian assistance. As a result, the Syrian refugees are obliged to eke out a living by working in the informal sector of the economy, taking their children out of school and sending them to poorly paid jobs, selling off any possessions that they brought with them, and accumulating large debts.

The Syrian refugee crisis is a symptom of the disorder which currently exists in the international system. At the end of the Second World War, the U.N. Security Council was established with the task of maintaining international peace and security. It has completely failed to attain that objective in Syria, and four of the Council’s five Permanent Members are now actively engaged in the country’s bitter conflict. A partial cease-fire began at the end of February 2016, allowing more aid deliveries to be made within the country. The day when Syria’s refugees can begin to think about going home still seems to be very far away. Indeed, many of the refugees who have moved on to Europe say that they have done so because they have lost all hope that peace will be restored in Syria, and because they cannot envisage ever living a dignified life in the MENA countries that have offered them asylum.

While European countries are now doing everything in their power to halt the arrival of Syrian and other refugees, it seems highly unlikely that they will be dissuaded from making that journey, however long, difficult, dangerous, and expensive it proves to be. In that context, it is important to challenge the conclusion drawn by some European leaders, namely that human smugglers are a primary cause of the refugee movement across the Aegean and Mediterranean seas. They are not. Smugglers simply facilitate and profit from people’s desire to move on.

A refugee emergency of the scale that has taken place from Syria might be thought to have some serious implications for national, regional, and international security. In fact, its impact has been less dramatic than many commentators had anticipated.

Looking first at refugee hosting countries in the region, there have been many predictions that the massive refugee presence would trigger social and political unrest. This feeling was especially strong in Lebanon, which has the largest Syrian refugee population on a per capita basis, a weak political system, and a very delicate sectarian balance. So far the feared unrest not appear to have happened, despite the pressures that the refugees have placed on scarce resources such as jobs, accommodations, public services, and the country’s infrastructure. In Jordan, the presence of around 650,000 registered refugees, as well as an unknown number of people who have not registered,[11] has inevitably placed an additional burden on the country’s limited supplies of water and electricity. However, this does not appear to have reached the stage where the refugees pose a threat to national security.

Another form of insecurity that the Syrian refugee crisis might have provoked is that of radicalization and terrorism. Such concern is not entirely unreasonable. There are many instances in which refugees have become radicalized and even militarized, returning to fight in their own country and representing a threat to the authorities in their country of asylum. This has not happened in the case of the Syrians. While some refugees have certainly gone back across the border to take up arms with one of the many factions engaged in the country’s armed conflict, the kind of militarization that has been witnessed amongst refugees from places such as Afghanistan, Central America, and Rwanda has not occurred. Similarly, despite the alarm that has been expressed about terrorists posing as refugees in order to gain entry to other states, the evidence for such a connection remains very slim. Indeed, the largest terrorist threat in the E.U. and United States has come from citizens rather than refugees and asylum seekers.

In recent months, it has become commonplace for European states to emphasize the risk that Syrian and other refugees pose to their security, their economies, their society, and even their culture. We must take such statements with a rather large pinch of salt. At best they are alarmist. And at worst they are a mask for xenophobia. As the most prosperous trading bloc in the world, with a total population of some 500 million, the E.U. should be able to cope with—and even benefit from—the one million refugees and migrants who arrived there is 2015.

If there is one form of disorder that has been generated by the Syrian refugee emergency, then it is to be found in the way that the E.U. and many of its member states have responded to the arrival of asylum seekers on their territory. At the beginning of the 1950s, and led by the countries and allies of Europe, the United Nations established what has become known as the international refugee regime. It has three principal components: an organization, the United Nations High Commissioner for Refugees (U.N.H.C.R.); a legal instrument, the 1951 Refugee Convention; and a set of norms, including the right to seek asylum in other states and a prohibition on refugees being sent back to countries where their life and liberty would be at risk.

Sadly, that regime is now under threat from its founders. Fences are being erected across Europe with the specific intention of keeping refugees out. Warships have been deployed in the Aegean and Mediterranean Seas with exactly the same purpose. The E.U. recently concluded a deal with Turkey whereby the latter has assumed responsibility to take back and process all migrants arriving in Greece after March 20, 2016 in exchange for 6 billion euros in aid and other incentives.[12] In these circumstances, we have to ask why less prosperous states in other parts of the world should continue to respect the basic principles of refugee protection. By prioritizing their national interests, European states are undermining the 1951 U.N. Refugee Convention, which says that “a satisfactory solution of a problem of which the United Nations has recognized the international scope and nature cannot therefore be achieved without international co-operation.”[13]

There are four forms of international cooperation which are needed to safeguard the welfare of Syria’s refugees and to prevent the emergency from generating disorder in the Middle East. First, the world’s wealthiest countries, including those in the Gulf, must provide the levels of humanitarian funding that are required to meet the basic needs of the Syrian refugees. Second, there must be a rapid shift from humanitarian to developmental approaches to the emergency, so as to support the economy and infrastructure of refugee-hosting countries in the region, thereby improving the job opportunities, educational, and health services available in them. Third, international cooperation must take the form of what is known as responsibility-sharing, meaning that states outside the MENA region must admit substantial numbers of refugees by means of organized resettlement programs, such as that which has been established by Canada. Finally and most evidently, additional efforts must be made to establish a meaningful peace process in Syria, so that its refugees see some hope for their country’s future and are eventually able to return to it, if and when they choose to do so.

[13] See the text of the 1951 Convention Relating to the Status of Refugees, U.N. Office of the High Commissioner for Human Rights (OHCHR), accessed March 10, 2016, http://www.ohchr.org/EN/ProfessionalInterest/Pages/StatusOfRefugees.aspx.