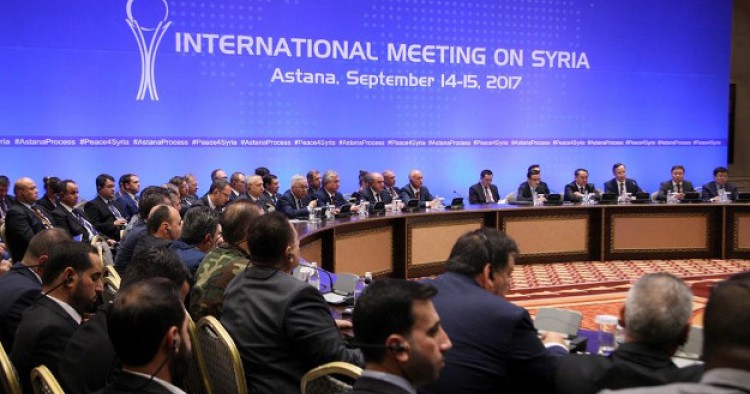 Iran, Turkey and Russia have agreed to establish the fourth de-escalation zone in Syria’s Idlib Province, according to a joint statement issued by the three countries at the end of the sixth round of talks in Kazakhstan today. Iranian media published the full text of the statement in Farsi and English. The other three zones include parts of the provinces of Homs, Latakia, Aleppo and Hama as well as eastern Ghouta. Tehran, Moscow and Ankara – the three guarantor states of Syria’s ceasefire agreements and peace talks – will also form a joint coordination center and deploy monitors to oversee the enforcement of the plan and prevent any potential clashes between pro-regime and opposition forces.

The joint statement reiterated a “strong commitment to the sovereignty, independence, unity and territorial integrity of the Syrian Arab Republic.” It emphasized that the de-escalation zones will be a “temporary measure” for an initial period of six months but can be extended. While the statement stressed the need to continue the fight against the Islamic State, a-Nusra Front and their associates, it called on all other “conflicting parties, representatives of the Syrian opposition and civil society to use emerging favorable conditions to step up efforts to give impetus to the intra-Syrian dialogue and advance the UN-led political process in Geneva as well as other initiatives, and to do so on an urgent basis.”

The next round of talks will be held in Kazakhstan at the end of next month. Representatives from the Syrian government and opposition groups also participated in the talks. And the United States had an observer status in the two-day talks in Astana. More than two million people are said to be living in areas covered by these de-escalation zones.

Comment: While the agreement on Idlib is an important development in the Syrian war, its successful implementation is far from guaranteed. Unlike the other three de-escalation zones, Idlib is a major stronghold of a jihadist umbrella of Hayat Tahrir al-Sham, which is not party to the deal. Ahrar al-Sham, a Turkey-backed rebel group with a sizable presence in Idlib, also did not take part in the Astana talks. In addition, there is deep mistrust between the Syrian government and opposition groups that did take part in the talks. Without a political framework and progress in the Geneva talks, any de-escalation of violence will be fragile and temporary.

Another factor that threatens the viability of the Idlib deal is that the presence of Iranian-led forces in Idlib could trigger serious backlash from opposition and local armed groups.

It is also worth noting that the Syrian Army and Iranian-led forces have repeatedly violated the terms of other Russian-sponsored ceasefire agreements in the past. And there is no guarantee Damascus and Tehran will adhere to the letter of the deal this time. Turkish media reports that Ankara is set to deploy thousands of troops in Idlib to monitor the situation along its borders – a move Damascus strongly opposes.

While all technical details about Idlib have not been sketched out, Yeni Safak, a pro-Turkish government daily, claimed that Idlib will be divided into three separate operational zones – with Turkish forces and opposition groups stationed in the northwest region near the Turkish border, whereas the Syrian and Iranian forces will be deployed to the southeast. Russian forces are said to be deployed to areas between the two zones.

Turkey, Iran and Russia failed to reach an agreement over Idlib in the last round of Astana talks. But Iranian officials said this week that expert meetings between representatives of the three countries in Ankara and Moscow helped resolve some of existing differences that precluded a deal last time.

The agreement in Idlib is also the latest indication that Ankara and Tehran are taking tangible steps to reconcile some of their differences and cooperate more to accomodate each other's interests and concerns in regional conflicts.