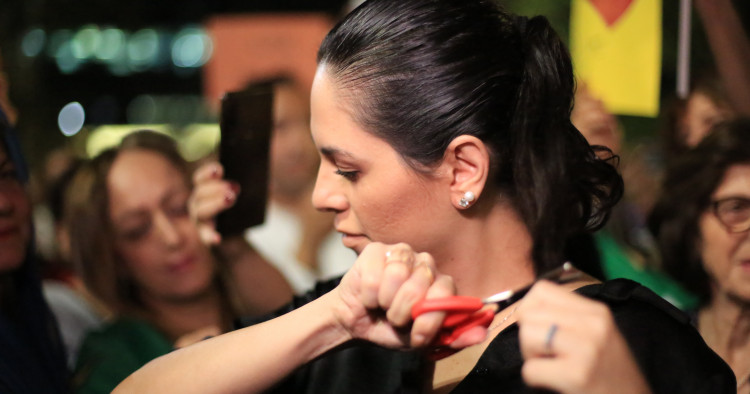 For seven weeks, Iran has been gripped by widespread protests — the first of their kind driven by women — following the death of 22-year-old Mahsa Amini at the hands of the regime’s so-called morality police.

These demonstrations represent perhaps the most sustained domestic challenge to the clerical leadership since 1979, despite efforts by authorities to quell the unrest through mass arrests, beatings and killings, and internet and social media cuts.

The head of Iran’s Islamic Revolutionary Guard Corps (IRGC) even warned protesters that Oct. 29 would be their “last day of riots,” in a sign that security forces will intensify their crackdown on the unrest, which Iranian leaders have blamed on Israel and the United States.

The charge against Israel is nothing new; but as with previous rounds of accusations, Tehran has yet to produce tangible evidence to substantiate its claim that the Israeli intelligence service is, together with the U.S., the real mastermind behind the protests. Ironically, while the official narrative from Iran has long been that Israel is a decaying power unable to stand up to Tehran, it is Israeli assessments on the state of the protests that appear to be of most interest to the senior leadership in Tehran.

Kayhan, the newspaper closest to Supreme Leader Ali Khamenei, who appoints the paper’s chief editor, wrote in an editorial in mid-October that even Israel has accepted that the protests will ultimately fail to topple the regime. By quoting a couple of Israeli television commentators, the paper wishfully concluded that Israeli experts have determined that “the number of protesters in Iran is small and they lack [a shared] ideology” and that “Unrests in Iran require maturity, leadership, planning and political vision, and currently we do not have any of these.”

The stock Khamenei’s top men put in Israeli assessments of the prospects for popular unrest would seem bizarre if it were not so clearly intentional. Pointing the finger at Israel is self-serving for officials in Tehran. Trying to pin a nationwide uprising on a detested regional rival, one whose existence the Islamic Republic has refused to accept since 1979, is obviously more convenient than acknowledging the genuine grievances pushing Iranian protesters to the streets.

In reality, Iran’s leaders know very well that while the U.S. and Israel both might have an interest in shaping and aiding the protest movement once it began, this large-scale mobilization of the Iranian public is a result of the regime’s own policies. No foreign intelligence service would be able to orchestrate such a large-scale popular revolt on its own; the population of the country would not have risen up like this had it not been so chronically beaten down by the regime’s policies since 1979. But yet the very same anger that the Islamists have created among the Iranian public has become an opportunity for the Israelis in their multi-front campaign against Tehran.

The ongoing threat of nuclear brinkmanship has long loomed over Israel’s decades-old shadow war with Iran. While cyberattacks and assassinations might be effective tools deployed by Israel to destabilize Iran’s internal apparatus, the protests have revealed another powerfully simple yet possibly destabilizing strategy at its disposal: speaking directly to the Iranian people.

Iran’s leaders would likely contend that this isn’t the first time foreign powers have intervened in Iran’s domestic politics, pointing to the role the Central Intelligence Agency (CIA) and the British secret services played in overthrowing Prime Minister Mohammad Mossadegh in 1953.

For their part, Israel and the U.S., while denying involvement in the protests’ inception, would say that that, today, they are merely expressing support for a population that’s looking to break free from the tight grip of Tehran’s militant clerical political class.

Israel’s political landscape is famously divided, which is why, yesterday, Nov. 1, the country held its fifth national election in less than four years. But there is virtual unanimity across the political spectrum when it comes to supporting the protesters in Iran. And since the protests began in mid-September, Israel’s public diplomacy efforts have been ramping up across all levels of society in more direct ways not seen for decades.

Israel is currently home to tens of thousands of Jewish people born in Iran or born to Iranian parents, including major public figures like Rita, one of Israel’s most famous singers, former President Moshe Katsav, or former heads of the Israel Defense Forces (IDF) Shaul Mofaz and Dan Halutz.

From early October, dozens of Israelis have gathered in Jerusalem in support of the women of Iran. Protests have also spread across the Middle East and to Europe and North America, as well. This past weekend, in Tel Aviv, hundreds of Israelis gathered, waving Israeli and pre-1979 Iran flags while chanting, “From Tel Aviv to Tehran, we are standing together.”

It’s not uncommon to see Israelis protesting against the theocratic regime in Iran. In fact, stoking fear in Israelis about Iran’s nefarious nuclear program is typically a cornerstone of any Israeli prime minister’s tenure, especially under Benjamin Netanyahu, who repeatedly said that the Islamic Republic was the single greatest existential threat to Israel.

Still, an overzealous Israeli response to the protests in Iran could backfire and lend credibility to the narrative from Tehran that Israel is behind them, according to David Menashri, an Iran expert and professor emeritus at Tel Aviv University. “With the regime claiming that the protests are initiated by the U.S. and Israel, Israeli public support may be a double-edged sword for them,” Menashri explained.

Relations between Iran and Israel haven’t always been so acrimonious. Prior to the Islamic Revolution of 1979, the two countries enjoyed 30 years of cooperation. In 1950, Iran even became the second Muslim-majority nation (after Turkey) to recognize the State of Israel. Iran fit neatly into the “Periphery Doctrine” espoused by Israel’s founding prime minister, David Ben-Gurion, which referred to his ambition to forge an alliance with non-Arab enemies of its enemies, including Iran and Turkey.

But those days are over. Officials in Tehran are now very likely anticipating more Israeli efforts as part of what Iran considers to be a broader Israeli information war — a campaign that will seek to target the Iranian population and to keep them mobilized against the regime in Tehran to the extent possible.

This campaign aims to stress two simple points of view to the Iranian population: First, that the common enemy of Israel and the Iranian people is the militant Islamist ideology of Ayatollah Ali Khamenei. And second, that a bright future awaits Iranian-Israeli relations as soon as the policy preferences of the Iranian people are reflected in Iran’s foreign policy.

As Israel ratchets up its public diplomacy, the leadership in Tehran will be forced to respond. But it is hard to see what effective counter-arguments the Islamic Republic has left at its disposal that might put the brakes on this latest Israeli initiative and momentum.

Alex Vatanka is the director of the Iran Program and a senior fellow in the Frontier Europe Initiative at the Middle East Institute in Washington. His most recent book is The Battle of the Ayatollahs in Iran: The United States, Foreign Policy, and Political Rivalry Since 1979.