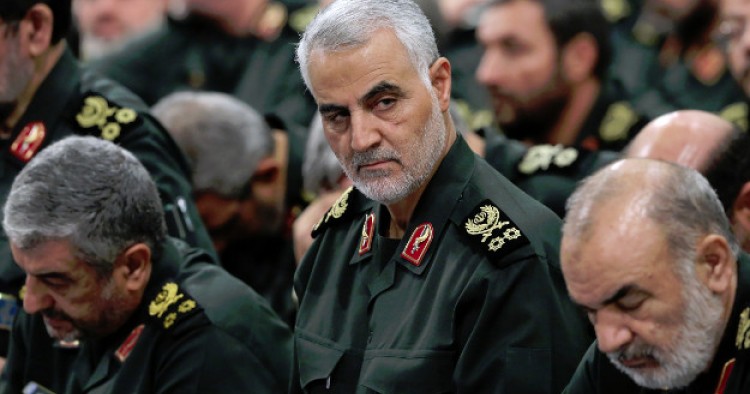 The United States is seeking to keep a significant military presence in Iraq and the broader region after the fall of the Islamic State, warns an article in the Islamic Republic News Agency. The author points out that pro-Syrian regime forces have made important territorial gains against the Islamic State recently and claims that the lifting of a siege over the eastern city of Deir Ezzor marks the beginning of the terrorist group’s end. But the article cautions that the United States and its allies are trying to exploit the rapid collapse of the Islamic State to find a justification for their continued presence in the region.

“It appears certain that the post-Daesh [Islamic State] era is a very suitable opportunity for America and its allies to increase their presence in the region and inflame national and transnational disputes and tensions between the regional countries so that the member countries of the resistance axis – and in general all Islamic-Arab countries that have rivalry and enmity with Israel – are further weakened. As a result, it seems that the post-Daesh period will potentially be very difficult and complicated not only for Iraq but for the entire region.”

The article further notes that although the Islamic State is weakening, the region is far from stability. The Islamic State sleeper cells will continue terrorist attacks in Syria and Iraq and the Iraqi Kurdistan’s independence referendum will fuel tension between Baghdad and Irbil, it warns. Referring to recent remarks by U.S. Secretary of Defense James Mattis in Iraq, the article adds that “another outcome of Daesh’s defeat is American attempt to pave the way for re-occupation of Iraq.”

Comment: With the Islamic State on the verge of collapse in Iraq and losing ground in Syria, the Tehran and its regional proxies see the presence of the U.S. military forces in Iraq and Syria as the biggest threat to their regional ambitions. In Syria, Iran and its allies are pressuring the U.S. to leave the al-Tanf region in the southeast along Syria’s border with Jordan and Iraq. The Syrian Army and Iranian-backed forces are also advancing eastward in Syria’s Deir Ezzor to recapture the oil-rich province from the Islamic State and reach the Iraqi border – heightening the potential for confrontation with U.S.-backed rebel forces that have begun to take on Islamic State strongholds in Deir Ezzor from the northeast.

And likewise in Iraq, Tehran and its allies within the Popular Mobilization Forces (P.M.F.) have increased pressure on Baghdad not to allow U.S. troops to stay in the country for the long-term. With the fall of Mosul, Iranian-backed P.M.F. groups are increasingly threatening to attack U.S. forces if they do not leave Iraq – which poses risks to U.S. military advisers helping the Iraqi security forces and also complicating post-conflict governance and reconciliation efforts at local and national levels in Iraq.

Last week, for example, a commander of Iranian-backed Iraqi militia group warned that his forces will target American troops in Iraq after the defeat of the Islamic State.  Jafar al-Hussaini, the spokesman for Kata'ib Hezbollah (Hezbollah Brigades), accused the United States and the leadership of the Iraqi Kurdistan of assisting Islamic State militants to safely withdraw from Tal Afar, an Iraqi city west of Mosul recently liberated from the Islamic State. And on August 1, Qais al-Khazali, the secretary-general of Iraq’s Asaib ahl al-Haq armed group, accused the United States, Israel, Saudi Arabia and Turkey of supporting the Islamic State in Iraq and the broader region. Khazali has pledged allegiance to Iran’s Supreme Leader Ali Khamenei, and his group takes orders from I.R.G.C. Quds Force Commander Qassem Soleimani, rather than the government in Baghdad. Khazali was arrested by the U.S. military in 2007 for his alleged role in high-profile attack in Karbala that had killed five American service members.