Tensions in the Golan 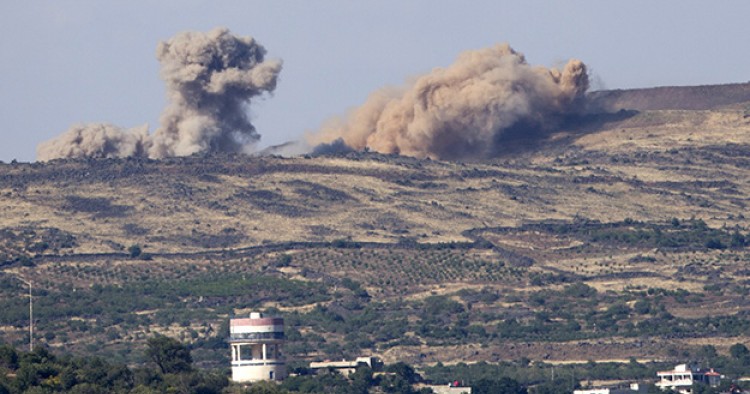 On June 22, members of the Druse minority in the Israeli town of Hurfeish threw rocks at an ambulance believed to be transporting wounded Syrian Jabhat al-Nusra rebels to medical care in Israel. The following day, a similar incident in the occupied Golan Heights resulted in the killing of one wounded rebel, also of Nusra.

According to a local official, the villagers are "incensed by the situation in Syria," which in recent weeks has witnessed growing pressure on Syria's Druse minority. In Idlib in the north executions and forced conversions to Islam have been reported. In the south, as the rebel assault in the Quneitra-Suwayda region continues, rebel forces, some of which the UN reports are affiliated with ISIS, have moved to surround the Druse village of Khader, just opposite the village of Majdal Shams in the Golan Heights.

The growing vulnerability of Syria's Druse community in the metastasizing war in Syria is only the most recent factor that Israel's leaders must consider as they look across their shared frontier with Syria along the Golan Heights.

From a strictly strategic level, Israel considers the war in Syria to benefit its security bottom line. Syria, the last hostile Arab state capable of mounting a conventional or non-conventional attack against Israel, has been effectively disarmed. The Syrian Army, marked by its transformation from a modern force capable of large-scale field operations across its borders to an exhausted outfit focused on battling an array of uncoordinated and haphazardly armed local opposition groups, will not be able to pose a credible military challenge to Israel for the foreseeable future.

Yet Israel is aware that this outcome comes with costs, the first of which is the challenge it poses to the politico-security architecture that was fashioned in the aftermath of the October 1973 War. The Assad regime has long been Israel's enemy to be sure, but it has been a "reliable" one. Damascus confronted Israel according to the rules of the game—informal and formal—that effectively restricted conflict to manageable, if occasionally lethal, parameters. Hardly a shot was fired across the Golan frontier for decades. The Assad regime and its counterpart in Israel were each the responsible address for attempts to maneuver for tactical advantage. When Syria or its Lebanese ally Hezbollah attempted to balance the scales in its favor, Israel made certain that it paid a price.

The ceasefire of 1974, monitored and supported by the UN via the United Nations Truce Supervision Organization (UNTSO) and the United Nations Disengagement Observer Force (UNDOF), was established as a reflection of international support for this no war/no peace arrangement that grew out of the 1967 and 1973 wars.

This system was far from perfect, but compared to the ambiguities and competing power vacuums that characterize Syria today, it was a model of good international behavior.

Given Assad's inability to prevail over his Syrian opponents, Israel, in the Golan no less than in Gaza, is looking for a responsible address—an enemy to be sure, but one that can be held responsible for actions on its side of the fence. To that end, there are reports that Israel has established contacts with elements of the motley force operating within sight of its own forces. But there is no reliable evidence to implicate Israel directly in the military support of jihadi efforts to oust the regime from locations across the border—or to suggest that there is some grand Israeli design to destabilize the Golan front, not to mention the revival of Yigal Alon's (and the Mandatory French) dream of a Syria divided into sectarian statelets.

Israeli officials have long been skeptical about the advantages and the possibility of regime change in Syria. The opposition is far from winning, but the regime cannot muster more than a bitter war of attrition in which the principal victims are civilians.

Signs of the disintegration of the old order are everywhere. The latest UN report on the UNDOF notes that the ceasefire along the border continues to be honored. But it also documents the alarming degree to which the long agreed-upon and maintained restrictions imposed on Israeli and Syrian military activity in restricted areas are being flouted with impunity by all sides.

“The presence of the Syrian armed forces and unauthorized military equipment in the area of separation are grave violations of the Disengagement of Forces Agreement," notes the report.

In addition, "[t]he increased use of heavy weapons by both the Syrian armed forces and armed groups…including the use of air power by government forces in the area of limitation on the [Syrian] side, is disturbing. Armed opposition groups and other armed groups continue to maintain control over significant sections of the areas of separation and limitation..."

The UN report also describes the establishment of six small, informal refugee camps for IDPs within the separation of forces zone, as well as exchanges of fire on the Syrian side of the line that occasionally stray into Israeli-occupied territory.

Israel is also employing prohibited military measures in violation of the Separation of Forces Agreement. For example, the UNDOF “observed an IDF-deployed missile launching unit at various locations on the [Israeli] side within 10 km of the ceasefire line, in addition to the intermittent presence of 155 mm artillery‎ guns. On 15 May, UNDOF observed an Iron Dome anti-missile unit deployed in the 10 km zone of the area of limitation on the [Israeli] side.”

Israeli officials insist that such actions are defensive. "We will not tolerate any firing towards Israeli territory or violation of our sovereignty and we will respond forcefully and with determination," Israeli Defense Minister Moshe Ya’alon said in a statement in January.

Notwithstanding Israel's heightened military activity, Israel’s response to the changes in and around the Golan has been to provide limited humanitarian assistance, such as transporting wounded rebels to Israeli medical facilities—the actions that so disturbed the Druse citizens—and, according to one knowledgeable observer, sending humanitarian aid across the border into Syria.

Unsubstantiated reports of an impending massacre of Druse in the village of Khader recently surfaced, forcing Israeli officials to address such concerns. Chief of Staff Lieutenant General Gadi Eisenkot told a Knesset committee, “The reality in the Golan Heights, where internal fighting is near the border with Israel, is of great concern to us, including the possibility we might have to deal with refugees from Syria arriving at the border…We will take measures to prevent a situation where refugees are massacred.”

And Prime Minister Benjamin Netanyahu said to the Knesset on June 16 in regard to the Druse that “we are vigilantly following all that is being done along our borders, and my instruction is to take all action necessary.”

For Israel, the instability on its northern border is a two-edged sword—welcome in a strategic sense, but a hothouse for the incubation of a new set of challenges and threats. On the whole, Israel continues to cast a wary, modest eye across the tense frontier. One official recalled Prime Minister Menachem Begin's cold-hearted observation on the prospects of the protagonists in the Iran-Iraq War of the 1980s: "We wish them both success."