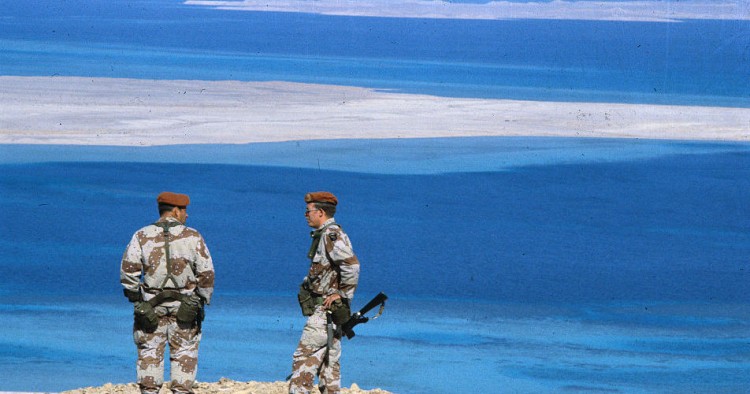 An article on this website recently asked the question: Whither the MFO? The impetus for the question was the inclusion of the Multinational Force & Observers (MFO) in a so-called “blank slate review” being undertaken at the Department of Defense of U.S. deployments around the world to assess their place in a U.S. strategic framework that emphasizes the pivot to Asia and great power competition. The article concludes that, regardless of the outcome of the review, “the MFO’s best days are behind it.”

Certainly, this is not the first time that questions have been raised about the utility of the United States’ continuing commitment to the MFO. Since its establishment in 1981, proposals to end or radically transform our presence in the Sinai have been a recurring theme in strategic analyses, especially those emanating from the Department of Defense or the military services. A quick Google search easily turns up challenges to the necessity of the MFO stretching back decades. In recent years, force protection concerns related to the rise of insurgency in the Sinai and the durability of Egyptian-Israeli security cooperation have led to renewed calls for an end to a mission that, it was argued, no longer served a needed function.

To a large extent, these arguments are based on two assumptions:

In fact, both of these assumptions are faulty.

In response to the deteriorating security environment in the Sinai in the middle years of the last decade, MFO leadership undertook a smart, effective reorganization that enhanced force protection without sacrificing the efficacy of its core mission. In fact, those core functions of monitoring and verification continue to be implemented to this day, including in the northern Sinai. The suggestion that there is an Egyptian-Israeli “understanding” that allows Egypt to exceed the force limitations put in place at Camp David is simply not correct. Even in the Strait of Tiran, where Egypt returned sovereign control over the two tiny islands of Tiran and Sanafir to Saudi Arabia, the MFO’s monitoring mission continues.

The suggestion that Egyptian-Israeli bilateral channels of communication have achieved a level of reliability precluding any further need for an American role is also misplaced. It is a misnomer to suggest that Tel Aviv and Cairo accept ad hoc violations of the force limitations put in place at Camp David. Former MFO Director-General David Satterfield played a critical mediation role at that especially fraught moment of Egyptian counter-insurgency operations, preserving the peace between the two countries and ensuring that needed adjustments to Egypt’s security presence were negotiated and independently verified by MFO observers. That role continues under current MFO Director-General Stephen Beecroft. In fact, the experience in the Sinai over the past decade demonstrates clearly that the role the MFO plays in ensuring there is an American voice in the room to facilitate Egyptian-Israeli negotiations and come up with mutually acceptable solutions to security challenges is as vital as ever.

While it is also correct to assert that, at the highest levels of the two governments, there is currently a historic level of cooperation and coordination on the security front, the experience of recent years provides evidence that this, too, can be easily misconstrued as representing broader consensus on the bilateral relationship. In fact, the popular protests that erupted in Egypt in 2011-12 against the Egyptian government quickly engulfed the Israeli-Egyptian relationship, forcing the hurried evacuation of the Israeli Embassy staff. Now, at a time when regional developments, especially negative movement on the Israeli-Palestinian front, are putting stress on Israel’s peace treaties with Egypt and Jordan, it would be foolhardy to assume that Egyptian-Israeli peace is immutable.

In conclusion, this is not the time to hang out the “Mission Accomplished” banner for the MFO. At a nominal cost to the U.S. in money and manpower, for nearly 40 years, the mission has been a phenomenal success. At a time when the U.S. commitment to the region is being viewed with increasing skepticism, the MFO is a prime example of U.S. capacity to organize and lead a multinational effort — some 13 governments contribute forces to the MFO mission and a nearly equal number provide funding — to support regional security and stability. Moreover, the mission ensures that the U.S. has a seat at the table to preserve what remains of the signal U.S. diplomatic achievement in the Middle East since the end of World War II: Israeli-Egyptian peace. Neither the UN nor any other third party could play that role should the U.S. walk away. It can only be hoped, therefore, that when the answer to Gen. Mark Milley’s question whether the MFO remains a valid military mission comes, it is a resounding yes.

Amb. (ret.) Gerald Feierstein is senior vice president at MEI. The views expressed in this article are his own.

Photo by Bettmann/Contributor via Getty Images