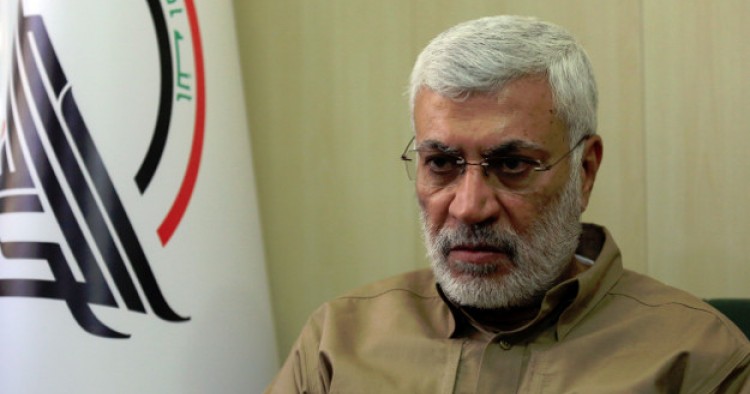 The deputy head of Iraq’s Popular Mobilization Forces (P.M.F.) has said that he takes a pride in being a “soldier” of Iranian Quds Force Commander Major General Qassem Soleimani, calling it “a blessing from God.” In a documentary aired yesterday on the Iranian state-run Ofoq television channel, Abu Mahdi al-Muhandis, one of the most powerful Iraqi Shiite militia commander, reiterated his allegiance to Iran’s Supreme Leader Ali Khamenei and the principle of the “Islamic jurisprudence.” He further explained that he fights for Iran because the Islamic Republic is the “mother of the Islamic community” and “our Mecca.”

The militia commander told the interviewer that his ties with the Islamic Revolution Guards Corps (I.R.G.C.) date back to the Iran-Iraq war in the 1980s.

He claimed he had fought alongside Iranian forces against the regime of Saddam Hussein and also cooperated with the I.R.G.C. against Iranian opposition group Mojahedin-e Khalq (MEK). Bragging about his fluency in Farsi, Muhandis said “Farsi is the language of the Islamic revolution” while “Arabic is merely the language of the Quran.” He recommended that when he dies he be buried in Behesht-e Zahra cemetery in Tehran, not in Iraq.

Comment: Muhandis is arguably the most influential commander within the P.M.F., and as his remarks indicate, is more loyal to Tehran than Baghdad. As he admitted in the interview, he has served as an I.R.G.C. proxy in the region for decades. According to U.S. government accounts, Muhandis participated in the bombing of Western embassies in Kuwait and plotted assassination of the Emir of Kuwait in the early 1980s. He has been convicted in absentia by the Kuwaiti government.

Under Soleimani’s supervision in 2007, he formed a group called Kata’ib Hezbollah and employed Lebanese Hezbollah experts to train and prepare his militiamen in guerilla warfare to attack coalition troops in Iraq. Kata’ib Hezbollah (or Hezbollah Brigades) now functions under the P.M.F. umbrella.

Muhandis also played an instrumental role in smuggling weapons from Iran into Iraq and distributing them to anti-coalition terrorist groups.

Recently, Muhandis, under Soleimani’s leadership, has played a prominent role in operations against the Islamic State in western Mosul – raising fears among local Sunnis and regional Sunni leaders that the sectarian militia forces may engage in revenge killings against the region’s Sunni inhabitants once the Islamic State is defeated.  He has on several occasions thanked Iran and Lebanese Hezbollah for providing his forces with weapons, consultation, expertise and training.

The P.M.F. consists of militia forces largely from Shiite but also other Iraqi ethnic and religious groups. While some units within the alliance are Iraqi nationalists and follow Iraq’s top cleric Grand Ayatollah Ali Sistani, many prominent units have close ties with Suleimani. Despite P.M.F.’s diversity, it is the Iran-backed militia units within the coalition – such as Kata'ib Hezbollah, Asaib Ahl al-Haq, the Badr Organization – that are playing the most prominent role in western Mosul and across Iraq. The alliance was formed in June 2014 following a call by Sistani to defend the Iraqi cities from the Islamic State. But as the Islamic State is on the brink of defeat, Iran-backed P.M.F. groups have recently turned their focus on rival Iraqi groups and American troops advising Iraqi security forces in Mosul and across Iraq.