The Trans Adriatic Pipeline: Why it Matters and What Comes Next? 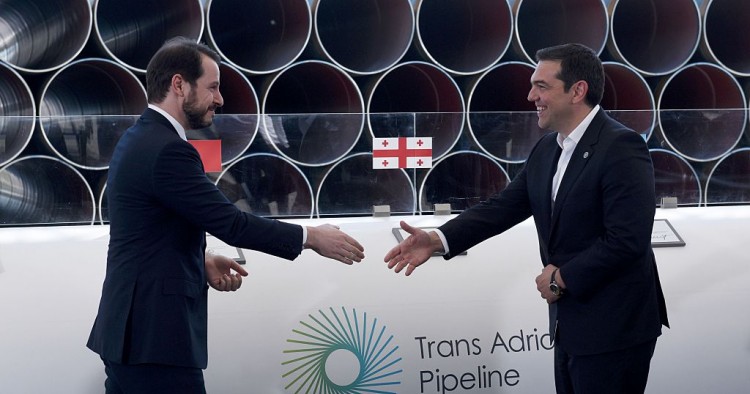 On November 14, the Trans Adriatic Pipeline (TAP) commenced operation. It is difficult to overstate the significance of this development. The new transit link running from Greece’s border with Turkey all the way to Italy, via a 878-km stretch that also crosses Albania and the Adriatic Sea, makes the much-discussed Southern Gas Corridor a reality. It brings an annual 10 billion cubic meters (bcm) of natural gas from the Shah Deniz offshore field in the Caspian to consumers in the EU and the Western Balkans, helps diversify supplies away from Russia, and enhances Azerbaijan’s position on European markets. TAP is also a crucial step for Turkey. Together with the Trans-Anatolian Pipeline (TANAP) and TurkStream, it transforms the country from an importer to a transit route for gas.

TAP is the outcome of a lengthy effort, at both diplomatic and business levels, to deliver Caspian hydrocarbons to the West. It started in the 2000s with the Baku-Tbilisi-Ceyhan (BTC) oil pipeline and the Baku-Tbilisi-Erzurum (BTE) gas pipeline running in parallel. They were an accomplishment for Turkish and U.S. energy diplomacy. The Ukraine gas crises of 2006 and 2009 brought the EU into the mix. Pursuing diversification, the European Commission, alongside several member states, championed Nabucco, an extension of BTE through Turkey and the Balkans. Yet Turkey played its own game and ultimately settled on TANAP, a partnership with Azerbaijan’s SOCAR (the majority shareholder). The last chapter in this saga was written in the summer of 2013. The BP-led Shah Deniz consortium - which at present brings together SOCAR, Turkey’s TPAO, Petronas (Malaysia) and NICO (Iran) - decided in favor of TAP against Nabucco West, a truncated version of the original Nabucco. That was a win for Greece, in the throes of a financial crisis at the time, as well as Italy and a setback for Bulgaria, Romania, Hungary, and Austria. What carried the day was strong business support for TAP: BP (20 percent share), Snam (Italy’s grid operator, 20 percent), Fluxys (19 percent), Enagas (16 percent) and Axpo (5 percent).

How much of a difference does TAP make?

Italy, a top economic player in both Southeast Europe and the Mediterranean, plays a crucial role. The 8 bcm it will receive is hardly a drop in the water, but also not a gamechanger against the backdrop of 74 bcm consumed in Italy each year. The project has had a rough ride politically too, having faced opposition from environmentalists and local groups in the southern province of Puglia where TAP has its endpoint. ENI, Italy’s major energy company, has long-standing partnerships with Gazprom and Rosneft.  It has also thrown its weight behind large-scale gas projects in the Eastern Mediterranean such as the Zohr offshore field in Egypt. In sum, though the Southern Gas Corridor matters, it will not become centerpiece of Italy’s energy diplomacy.

Greece and Bulgaria are clear beneficiaries. DEPA and Bulgargaz have each signed long-term contracts with the Shah Deniz consortium for 1 bcm a year. This volume covers about a quarter of annual demand in Greece and a third in Bulgaria. The ICGB interconnector pipeline under construction between the two neighbors will link up TAP to the Bulgarian gas grid. The Bulgarian government is hopeful that ICGB will be up and running by mid-2021 but chances are this deadline will pass. Bulgaria’s long-term contract with Gazprom, enjoying a virtual monopoly on the market, expires at the end of 2022 and the deal with Shah Deniz provides a bargaining chip in extracting better terms from the Russians. The same is generally true of Greece but DEPA’s contract runs until 2026. Even so, TAP advances integration between the two neighbors which are also cooperating on a liquefied natural gas (LNG) terminal next to the northern Greek port of Alexandroupolis.

Last but not least, TAP has fallout on the Western Balkans. The region may absorb the additional volumes once the pipeline doubles its capacity. Though it will take no gas from TAP’s first phase, Albania is part of the Southern Gas Corridor. This is incentive to improve its distribution network and overhaul the sector. In the future, TAP can connect to parts of former Yugoslavia such as Montenegro and Kosovo (both of which do not consume pipeline gas at present), and North Macedonia. Skopje has  been working on an interconnector with Greek network operator DESFA. Kosovo is interested in joining. Albania and Montenegro have been pushing the so-called Ionian Adriatic Pipeline (IAP) together with EU member Croatia, the main stakeholder in the project, and Bosnia and Herzegovina. If and when the Southern Gas Corridor’s throughput capacity is scaled up to 20 bcm in the coming decade, as the Shah Deniz consortium insists, Western Balkan countries would be likely importers. In places like North Macedonia, Kosovo, and Bosnia and Herzegovina natural gas could provide a partial fix to endemic air pollution due to reliance on low-calory lignite coal for heating. This will also advance the EU goal of decarbonization. Of course, a switch to gas is easier said than done given the infrastructure bottlenecks, market fragmentation, lack of investment, and regulatory shortfalls hanging over the energy sector in the region. The EU is pushing for reform and infrastructure development, but it is a slow and arduous process.

The Southern Caucasus is to benefit too. This is obvious in the case of Azerbaijan, but Georgia also gets strategic advantage. Through TANAP and TAP, it is now a transit country contributing to Europe’s energy security. The new infrastructure strengthens ties with EU and NATO members such as Italy, Greece and, soon enough, Bulgaria. This is an asset for Georgian foreign policy.

TAP is bringing change to regional energy markets and will surely have political repercussions. The Southern Gas corridor won’t end Russia’s dominance overnight, but we have come a long way over the past decade or so.

Dimitar Bechev is a fellow with MEI's Frontier Europe Initiative. The views expressed here are his own.