Is Trump’s “Deal of the Century” really a peace plan? 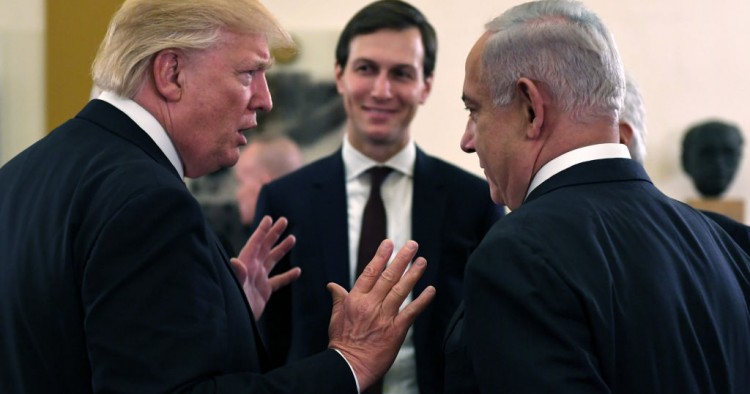 In September 1978, during the Camp David peace summit, U.S. President Jimmy Carter presented Israeli and Egyptian negotiators with a draft peace agreement that served as the basis for discussions during the summit and eventually, after several rounds of revisions, for an agreement. President Bill Clinton tried a similar approach 22 years later, and in December 2000 he presented his parameters for a final-status agreement to Israeli and Palestinian representatives. In other conflicts, too, mediators have drafted and presented peace plans, such as the Vance-Owen Plan (1993), which was formulated by mediators from a joint framework of the UN and the European Community (ICFY) to end the war in Bosnia, and the Annan Plan (2004), which was proposed by UN Secretary-General Kofi Annan with the aim of resolving the conflict in Cyprus.

The goal in presenting peace plans during a mediation process is to suggest a possible basis for an agreement and to push the various sides of the conflict toward it. Nevertheless, this is a sensitive process that holds many risks, and it requires appropriate conditions, careful and serious preparatory work, and a deep understanding of the positions of the parties and the situation on the ground.

According to media reports, the Trump administration is preparing to present the “Deal of the Century,” proposing an outline for an Israeli-Palestinian agreement. Very little is known about the plan, its release date, content, objectives, or how it will be presented. However, it is important to discuss the context and the conditions under which the plan has been formulated, and to highlight some basic elements that are required for a third party to promote a peace plan — which are absent in this case.

In the above-mentioned examples — Carter 1978, Vance-Owen 1993, Clinton 2000, and Annan 2004 — the plan was proposed by a third party (whether a representative of a state, international organization, or other international framework) that led a mediation process and was accepted by both sides (even if the mediator was not necessarily perceived as neutral by all parties), and engaged in continuous dialogue with them. In these cases, the plans were presented after intensive negotiations between the parties, with the involvement of the mediator, and they aimed to present bridging proposals for the remaining disagreements. In the case of Donald Trump’s “peace plan,” however, things are different.

The U.S. has been acting as the main mediator in the peace process between Israel and the Palestine Liberation Organization (PLO) since the Oslo Accord of September 1993 (whereas in the Oslo talks, the parties were assisted by Norwegian facilitation). The U.S. has maintained this status over the years and throughout various administrations, as exemplified by its leading role in the Wye River Summit (1998), Camp David Summit (2000), the Annapolis process (2008), and the Kerry initiative (2013-14). The Palestinians never saw the U.S. as neutral, but accepted it as a mediator because it was understood to be the only international actor that could pressure Israel. In some instances, it was the Palestinians who pushed for American involvement, with the hope that it would reduce the power asymmetry between them and Israel.

At the beginning of the Trump era, it seemed that the U.S. could continue in this role, and President Trump met with Palestinian President Mahmoud Abbas in both the U.S. and Bethlehem. However, within a short period of time, the U.S. administration took unprecedented steps that led to a different outcome, one which changed the rules of the game. These steps included Trump’s decisions to relocate the U.S. Embassy in Israel to Jerusalem, close the PLO mission in Washington, cut aid to the Palestinians (including to hospitals in East Jerusalem and joint Israel-Palestinian projects), and close the American consulate in Jerusalem, which over the years has led the dialogue with the Palestinians. In addition, the current U.S. administration did not reaffirm its commitment to the two-state solution and decided to recognize the Israeli annexation of the Golan Heights — a step that was perceived by the Palestinians as a renunciation of the fundamental principles of the peace process (UN Security Council Resolutions 242 and 338). These developments have led to a rift between the U.S. and the Palestinian leadership in Ramallah. Instead of advancing the resolution of the conflict, the Americans have created new areas of conflict and tension between them and the Palestinians. The main “contact” between American mediator Jason Greenblatt and the Palestinian leadership has taken the form of arguments on Twitter.

In short, the current circumstances differ significantly from those in which peace plans were introduced by a mediator during a conflict mediation process. The Americans are not an agreed-upon mediator any more. The role and status of the mediator is not carved in stone and cannot be taken for granted. Rather, it is a position that an international actor must earn and preserve. It comes with responsibilities and requires building trust with both sides to the conflict. Thus, for example, the French peace initiative of 2016-17 encountered strong opposition from the Israeli government, which claimed that it was not balanced and described it as a conspiracy and a dictate. Another example is Turkey, which mediated between Israel and Syria in 2008. However, due to policy changes since then, along with negative developments in its relations with Israel, Turkey is no longer able to mediate between Israel and its neighbors.

A reversal of principles

According to Jake Walles, a former U.S. diplomat, the Trump administration’s peace plan is not actually aimed at advancing negotiations, but rather at altering the basic parameters of the international consensus on the two-state model as the desired solution to the Israeli-Palestinian conflict. If this is actually what the plan entails, it is likely to spark widespread international criticism. Indeed, such criticism has already been voiced by Arabs, Europeans, and Russians, including in a declaration from eight EU member states in December 2018 and another following the February 2019 meeting of European and Arab foreign ministers in Dublin.

In light of this, what can the Trump administration do if it truly wishes to advance peace and resume the role of legitimate mediator? First of all, and before presenting an outline for a final status agreement, it must regain the trust of the Palestinians and take steps to balance its previous moves favoring Israel. Another possibility is that the U.S. recognize the need for a broader and more inclusive mediation structure, involving not only the U.S. but also other countries — including European and Arab states. This would be a stronger, better version of the Middle East Quartet, and similar to the Contact Group model that was used in the conflict in Bosnia and Kosovo. Such a structure would enjoy greater legitimacy, have more leverage with Israel and the Palestinians, and would thus be better positioned to promote short-term actions on the ground and longer-term pro-peace policy shifts.

Trump’s policy on the Palestinian issue has been welcomed by the Israeli government, but the consequences of his moves are damaging Israel’s interests and the prospects to resolve the Israeli-Palestinian conflict. The U.S.’s inability to act as a mediator between Israel and the Palestinians is bad news for Israel. In Gaza, Israel has acknowledged the important role of UN and Egyptian mediation in efforts to avoid another cycle of warfare. Given the rift between Washington and Ramallah, the Israeli government should welcome broader international mediation with the PLO and view the addition of other actors to the mediation process — alongside, not instead of, the U.S. — as a step in the right direction.

Dr. Lior Lehrs is a Policy Fellow and Director of the Program on Israeli-Palestinian Peacemaking at the Mitvim Institute. He is a Postdoctoral Fellow at the Leonard Davis Institute for International Relations and the Harry S. Truman Institute, both at the Hebrew University of Jerusalem. Dr. Lehrs’ current research focuses on international mediators in conflict resolution processes, and the peace plans they proposed. The views expressed in this article are his own.