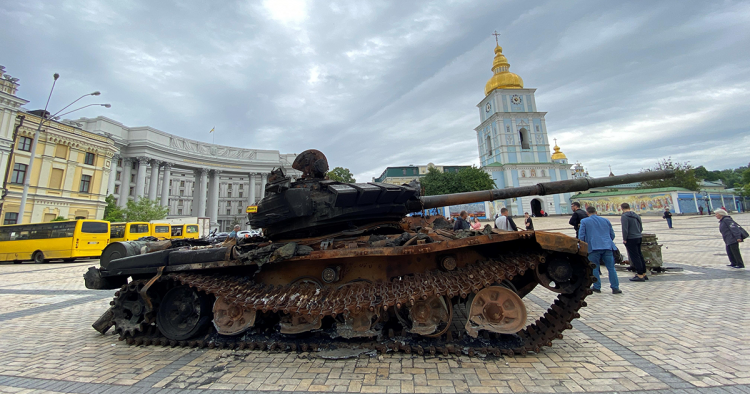 Three months have passed since Russia launched a full-scale attack on Ukraine with an ambitious plan to destroy its statehood and seize the capital, Kyiv. So far, the Russian military has seriously underperformed, making it impossible to achieve President Vladimir Putin’s goal of a carrying out a blitzkrieg attack and quickly declaring a glorious victory. This is due first and foremost to Ukrainians’ fierce resistance and strong will to protect their land from Russian aggression, but it is also the result of unexpected Western unity. The war in Ukraine has brought about fundamental policy changes in the West. Finland and Sweden’s historic decision to apply for NATO membership sheds light on what defeat might look like for Putin, with an economically and militarily drained Russia, incapable of fulfilling its aims in Ukraine, facing a more united and stronger NATO.

Ironically, it is Putin’s destructive actions that have strengthened Western unity, and despite past political divisions, so far the allies have been able to provide substantial military and economic support to Ukraine. Yet, as the dust settles and the initial shock wears off, some Western European leaders are worried about how a humiliated Russia might retaliate. In the first phase of the war, the idea of a Ukrainian victory was off the table, and even President Volodymyr Zelenskyy was ready to consider Ukraine’s neutrality as part of the peace talks with Russia. Since then, the Ukrainian army has pushed Russia out of the Kyiv region and as a result of a counteroffensive, Russian troops were forced to pull back from the north and east of Kharkiv.

In light of Russia’s initial failure on the battlefield, Putin has resorted to bullying the West by threatening to use nuclear weapons. Fears of further escalation have prompted French President Emmanuel Macron to carefully begin a debate about offering Putin a face-saving exit. Macron has also warned Europe of the potential dangers of humiliating Putin.

Italy has proposed a four-point peace plan to U.N. Secretary-General Antonio Guterres. Italy’s vision of peace involves a neutral Ukraine whose security would be guaranteed by other countries, without identifying which ones would be providing the guarantees. Unless the security guarantees are nominal, there is no way that Russia would agree to them. In fact, Russian Foreign Minister Sergey Lavrov has already dismissed the plan, claiming it is “not serious.” In effect, Italy’s peace plan proposes pushing Ukraine into a Russian trap that would leave Kyiv even further away from achieving a long-lasting peace. The plan also includes granting Crimea and the Donbas region de-facto independence by providing them with almost complete autonomy, thus enabling Russia to use them as leverage and reignite the conflict whenever it pleases.

At the same time, other key NATO allies, such as the U.S. and U.K., are setting a different tone by openly stating that they are willing to help Ukraine not only to repel Russian aggression but also to win the war. U.K. Foreign Secretary Liz Truss has stated that Russia must be pushed out of all areas of Ukraine that have been annexed and occupied prior to Feb. 24, 2022. U.S. Defense Secretary Lloyd Austin has said he believes that Ukraine can win the war.

Although the allies have provided continuous support for Ukraine, as Russia threatens more dangerous escalation, some of them may seek to shield Putin from humiliation and softly advocate for Russian interests to be accommodated. Those who are tempted to pursue such an approach keep forgetting that this is a tried and tested strategy — and one where the West will always lose. Putin is hoping that eventually Western unity will crumble and sanctions will be softened, and in the meantime he will try to grab as much Ukrainian territory as he can and declare victory. The leaders who have appeased Putin in the past are directly responsible for the bloodshed in Ukraine today. Appeasement has only further emboldened Putin to pursue his maximalist goals in the post-Soviet space.

In fact, there is no need to read between the lines. Russian Gen. Rustam Minnekayev has already threatened Moldova by claiming that Russia plans to expand its offensive to provide land corridors to Crimea and Moldova. In Georgia’s occupied South Ossetia region, a “referendum” on joining Russia was initially announced and later suspended pending further consultations with Moscow. Both countries “host” Russian troops on their territory and have recently applied for EU membership alongside Ukraine. Providing Putin an off-ramp in Ukraine will increase his appetite to look for relatively easy victories in states like Georgia and Moldova by further destabilizing them and violating their territorial integrity. Moreover, setting the precedent that an aggressor can achieve territorial gains through a peace deal after pursuing unjustified military action would only encourage other malign actors as well.

Even if peace talks continue, it is naive to hope that Russia will suddenly become an honest broker. Russia has violated the Minsk Accords and the 2008 six-point cease-fire agreement with Georgia. There is no reason to believe that an even more aggressive Moscow will fulfil its obligations now. France and Germany have been tirelessly pushing for diplomacy since the beginning of the war. President Macron’s endless phone calls to Moscow have made it clear that Putin is unwilling to make any concessions. Such regular interactions with Putin are counterproductive and suggest that the West is not serious about isolating the Russian president.

France and Germany should really know better by now, as they have been directly involved in the Minsk process that was supposed to end the conflict in eastern Ukraine. According to sources in the Ukrainian government, both countries have tried to push Ukraine to implement the Russian interpretation of the Minsk Agreement, which would have granted a special status and more autonomy to the Donbas region — and thus give Russia a de facto veto on Ukraine's foreign policy decisions. Recently, President Zelenskyy has mentioned that his French counterpart has tried to convince him to accept concessions to help Putin to save face.

It is time for Western leaders to deal with Russia as it is and not as they want it to be. Russia under Putin cannot be treated as a rational actor, nor it is possible to ever return to business as usual with Putin’s Russia. Unless the West is willing to offer immediate security guarantees to Ukraine, Moldova, and Georgia — which seems unlikely — the only way to deter further Russian aggression is by humiliating Russia in this war. Ukraine has already been doing its part through its immense sacrifices. There is no room now for Western leaders to back down, as it will simply increase Putin's appetite. The cost of providing a face-saving exit to Putin is much higher than of his ultimate humiliation on the battlefield.

Natia Seskuria is an associate fellow at the Royal United Services Institute (RUSI) and was previously a fellow with MEI's Frontier Europe Initiative. The views expressed in this piece are her own.