Turkey, Russia and the escalation in Nagorno-Karabakh 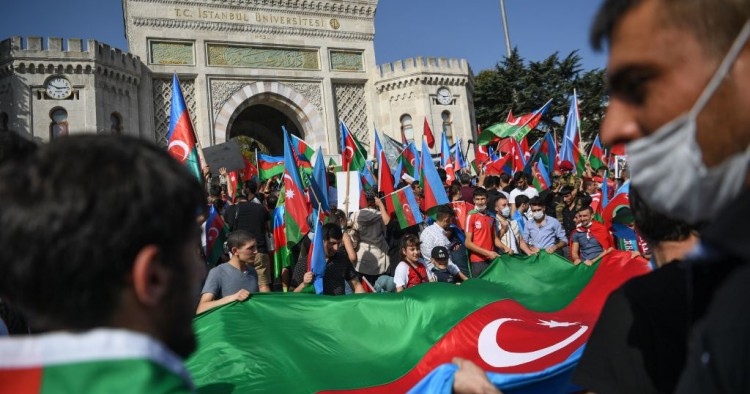 On September 27, hostilities broke out between Armenia and Azerbaijan in the disputed region of Nagorno-Karabakh (NK). Following several days of fighting, the region is now witnessing the worst escalation of tensions since the early 1990s. Military and civilian losses on both sides number in the hundreds. The feeling of all-out war, overshadowing a flare-up in April 2016, is palpable. Both Baku and Yerevan have declared a state of emergency, with passions running high on the ground and across social media networks.

Experts believe Azerbaijan’s objective is to recapture Füzuli and Jabrayil, two of the seven districts outside the Soviet-era autonomous oblast of NK. Armenians captured both regions in 1993, creating a territorial buffer around NK as well as a land bridge to Armenia proper. Azerbaijan now believes the balance of power has shifted in its favor. Baku sees an opportunity to recover territories lost nearly three decades ago, having already made modest gains in 2016. At time of publishing, Azerbaijan claims to have seized Jabrayil and the nearby villages. If true, this would be the first urban settlement in the area Baku has been able to recover. The weekend saw intense shelling of Stepanakert, NK’s capital. In response, Armenians launched strikes at the city of Ganja - deep inside Azerbaijani territory.

Azerbaijan’s efforts are boosted by Turkey’s readiness to render robust military support. Ankara has reportedly dispatched fighters from the northeastern Syrian cities of Afrin and Idlib to the frontlines of NK - a move resembling Turkey’s deployment of Syrian militiamen as part of its ongoing intervention in Libya. Syrian sources are reporting that mercenaries have been killed in action. Meanwhile, the Turkish Air Force is present. In July, following an incident on the Azerbaijani-Armenian border, F-16s and T129 attack helicopters were sent by Turkey to Azerbaijan for joint drills. Armenia’s Ministry of Foreign Affairs is now alleging that one of their Su-35 fighters was shot down by a Turkish plane operating from an airfield in Ganja. Yerevan insists the incident happened in its own airspace, raising the prospect of Russian intervention because of the Collective Security Treaty Organization (CSTO) alliance with Moscow. Unmanned aerial vehicles produced by Turkey, already present in Syria, are believed to have now been deployed along the Azerbaijan-Armenia border. Armenia insists Turkish officers and special forces are also involved.

Though Turkey denies playing a military role, it has intensified its anti-Armenian rhetoric. President Recep Erdogan slammed Armenia as “the biggest threat to peace in the region.” Main opposition parties in Ankara have been rallying behind the flag, while on September 28, pro-Azerbaijani demonstrators paraded before the Armenian Patriarchate in Istanbul, an historic institution which has little to do with the fighting in NK.

Turkey has so far disregarded calls for a ceasefire from the U.S., EU, China and, remarkably, Russia. Kremlin spokesperson Dmitry Peskov has indirectly pointed a finger at the Turks: "Any statements on military support or military activity unambiguously add fuel to the fire, and we are categorically opposed to this." This pronouncement came following a phone call between Turkey’s Foreign Minister Mevlüt Çavuşoğlu and his Russian counterpart Sergey Lavrov on September 27, which was apparently unproductive.

Will Erdogan risk a head-on collision with President Vladimir Putin over Karabakh?  This was avoided in April 2016 at the height of the Russo-Turkish standoff in Syria. Thankfully, the likelihood of going over the brink is not great this time around either.

It is true that Ankara and Moscow’s interests are at odds when it comes to Azeri-Armenia relations. Turkey sees Azerbaijan as its ethnic kin and an ally on security and energy. In contrast, Russia adopts a balanced stance with links to both Armenia, a member of the CSTO and the Eurasian Economic Union (EEU), and Azerbaijan. Moscow profits from the status quo, not least because a frozen conflict provides Russia with extensive political leverage in this part of the former Soviet empire. Like Baku, Ankara seems committed to establishing new facts on the ground through military strength.

Turkish officials are now repeating a long-standing position that Armenia’s withdrawal from the buffer regions outside NK is a precondition for a peace process. But the context has changed. Previously, Turkey had stressed that diplomacy was the way forward. Now, amidst an escalation of violence, demands for a withdrawal from the occupied regions around NK hint at the belief that the time is ripe for the Azeris to take possession of the territories in question and corner the Armenians.

Much like in Syria and in Libya, Erdogan may be hoping for a deal with Putin. The Turkish president is biding his time until the Azeris make, and consolidate, territorial gains. If and when that happens, he could propose a bilateral peace initiative to Russia. This would be a symbolic coup for Turkey, elevating the country to a major player in the South Caucasus, on par with co-chairs of the OSCE's Minsk Group Russia, the U.S., and France.

Whether this gamble pays off for Turkey depends on Azerbaijan’s performance on the battlefield. Baku’s success (or failure) will determine the extent of Turkey’s gains. On the other hand, a stalemate and maintaining of the status quoÂ will boost Russia. Putin finds himself largely on the same page with Europe and America when it comes to Nagorno-Karabakh. On October 1, the Russian leader issued a joint call for an immediate truce with President Donald Trump and President Emmanuel Macron. There is a good chance Moscow is reaching out to Iran as well. Tehran denied reports of shipments of Russian weapons entering Armenia through their shared border. The Islamic Republic has been viewing neighboring Azerbaijan’s defense cooperation with Israel and friendly ties with Saudi Arabia with suspicion.

It is also worth remembering that Moscow may push back strongly against President Ilham Aliyev if he is deemed to be overreaching. The same goes for Armenian Prime Minister Nikol Pashinyan given Russia’s extensive security and economic leverage over Yerevan. Erdogan may score a political win if the Azeris can seize land, but Moscow - initially caught off-guard by this crisis - still has cards to play. The ball is very much in Putin’s court.