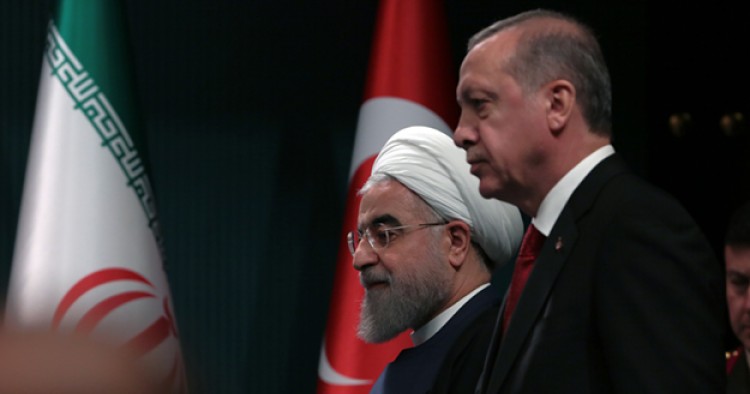 Turkey’s intervention in the Syrian conflict signals a new milestone in the five-year-old Syrian crisis, with its insertion as a new direct player certain to further complicate the dynamics of this already complicated conflict. Turkey’s Operation Euphrates Shield in northern Syria wasn’t a surprise with respect to the concept—the Turks have been advocating a safe zone for several years—but it was so in terms of timing, just six weeks after the failed coup attempt. The incursion also comes as Ankara revamps its foreign policy, including a rapprochement with Russia and a warming of ties with Iran.

Two weeks before the Turkish intervention, President Recep Tayyip Erdogan met Russian President Vladimir Putin in St. Petersburg to bury the hatchet after Turkey’s downing of a Russian fighter jet in November 2015. Erdogan and Putin discussed reviving bilateral relations and the situation in Syria. Only 48 hours after Erdogan’s return from Russia, Iranian Foreign Minister Mohammad Javad Zarif arrived in Ankara where he held talks with the Turkish president and other officials. According to a senior Iranian official I spoke with, the last discussion showed a willingness within the Turkish leadership to discuss real solutions in Syria. During the visit, both sides agreed to form a joint committee on Syria for intensive talks at various levels.

Turkey’s new tone has changed the Iranian perception of Turkey’s movements in Syria. Iran initially responded to the Turkish incursion with positive passiveness—the first reaction was mainly a call on Ankara to coordinate with the Syrian government.

Speaking to another Iranian official, he stated that Iran wasn’t aware officially of any Turkish plans to intervene militarily in Syria. Yet Iran understands the pretexts of the Turkish decision given both countries’ common interest in foiling any Kurdish attempt to create an autonomous state in northern Syria. The two regional powers became alarmed at the advancement of the People’s Protection Units and the Syrian Democratic Forces toward the border town of Jarabulus and its simultaneous assault in Hassakeh city to oust government forces. The common Turkish-Iranian concern is over the possibility that de-facto Kurdish autonomy in Syria will fuel aspirations of separatism among Kurds in both countries. The Syrian government also shares this concern, since any attempt to create a Syrian Kurdistan may lead to the complete fragmentation of the nation.

Despite the common interests in thwarting Kurdish autonomy, persisting differences over the Syrian conflict is cause for suspicion on Turkey’s intervention on the part of the Iranians. On August 30, Iran toughened its language, and called for Turkey to “end its Syria intervention immediately.” Iran’s new stance directly followed a harsh statement from its ally in Damascus: “The government of the Syrian Arab Republic condemns, with the strongest terms, the repeated crimes, violations, aggression and massacres perpetrated by the regime in Ankara against the Syrian people, sovereignty and territorial integrity of the Syrian Arab Republic,” read a letter sent by Syria’s foreign ministry to U.N. Secretary-General Ban Ki-moon and the U.N. Security Council.

There are serious fears in both Damascus and Tehran that the Turkish intervention will not end anytime soon, and could empower Turkish-backed Syrian opposition forces directly fighting Syrian government and Iranian forces on the ground. According to an Iranian official, “[there are] obviously no agreements reached between Iran and Turkey over Syria,” despite the recent goodwill shown by both sides. The fear on the Iranian-Syrian front is boosted by the fact that the Turkish intervention is in northern Aleppo, in short distance to where the Syrian government, Iran, Hezbollah and Russia have re-imposed a siege on the rebel-held parts of eastern Aleppo.

While these developments were taking place over the weekend, Erdogan and Putin were appearing cordial at the G20 Summit in China. The fondness on display between the two leaders prompted many to speculate that a Russian-Turkish initiative is being prepared in coordination with Tehran. While Russia and Turkey may indeed be advancing in their pursuit of a common approach on Syria, this does not necessarily include Iran.

When Turkish Foreign Minister Mevlut Cavusoglu paid a surprise visit to Tehran on August 19, there were speculations that Erdogan would follow suit the following week. However, no timing for an official visit has been set, but it is being prepared. The Turkish incursion may prompt a delay of this possible visit, as Iran, and indeed the world, awaits to see Turkey’s next move. Nevertheless, both countries will continue to practice diplomatic etiquette, as they have throughout the Syrian conflict, and may even accelerate efforts to reach an understanding, but any suggestion of newfound Turkish-Iranian cooperation on Syria still appears distant.