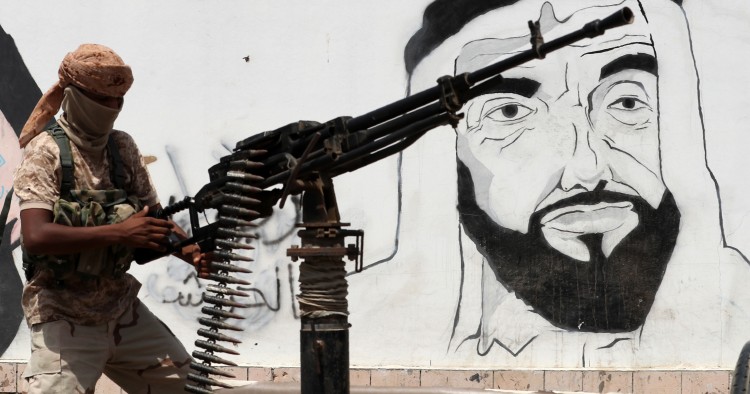 Yemen’s strategic and oil-rich eastern governorate of Hadramawt stands at a critical turning point, as feuds between competing political and military groups are coming to a head. Forces supporting the internationally recognized government of President Abed Rabbo Mansour Hadi have gained prominence in the north of the region (Sayoun and Wadi Hadramawt), while the Hadrami Elite Forces, which back the secessionist Southern Transitional Council (STC) and have played a major role in fighting al-Qaeda in the Arabian Peninsula (AQAP), hold sway along the southern coast (in and around Mukalla). The risk of intra-regional clashes is on the rise, as two rival Hadramawts are emerging.

On April 13, President Hadi convened a session of the House of Representatives for the first time since the beginning of the war in 2015. The representatives came together to elect a new speaker — Sultan al-Borkani of the General People’s Congress (GPC), the party of former President Ali Abdullah Saleh — and to set the future legislative agenda. The last election for Yemen’s 301-seat Parliament was held in 2003 and its mandate was extended in 2009 due to political disagreements. The location of this recent gathering was particularly significant, as Hadi choose to hold it in Sayoun, not Aden, which has been Yemen’s temporary capital since the 2015 Houthi coup in Sanaa.

According to news reports, the local authorities in Adan did not allow Hadi to host the meeting there, a decision which underlines how precarious the balance is within the city. Aden remains divided between a few “pro-Hadi” districts and many “pro-STC” ones. The choice of Sayoun as a venue for the gathering, however, confirms Hadi’s recognition of the central role of Hadramawt in a united Yemen and, at the same time, his willingness to send a clear message to the STC about its separatist aspirations.

Wadi Hadramawt, the area around Sayoun and other historical centres such as Shibam and Tarim, remains the ultimate frontier between the desert and inhabited upper north of the governorate — next to the Rub al-Khali (or Empty Quarter) bordering Saudi Arabia — and the routes linking the inner valleys with the coastal cities and ports in the south. Military allegiances in the north of Hadramawt are uncertain and fluid: General Abdulrahman al-Halili, the former commander of the 1st Military District and the 37th Armored Brigade, was a Saleh loyalist who switched sides to back Hadi. General Ali Mohsin al-Ahmar, Hadi’s vice president and the deputy supreme commander of the armed forces, has military support in the area; so too does the Islah Party (comprising local members of the Muslim Brotherhood and some Salafis), whose tribal militias control border crossing with Saudi Arabia. Both are backed by the kingdom.

Despite the proliferation of military actors, security remains a concern. In 2017 and 2018, two members of Sayoun’s prominent Kathiri tribe, one of whom belonged to Saleh’s GPC, were killed by unknown assailants in the province. Before Hadi travelled from Riyadh to Sayoun to take part in the parliamentary session, Saudi forces and the Yemeni Presidential Protection Units reportedly swept into Sayoun to secure it.

The Houthis condemned the Sayoun meeting, convening a parallel session of their “Parliament” in Sanaa on the same day, to elect delegates for at least 35 vacant seats. They even went so far as to launch a drone against Sayoun’s airport on April 11, which was later intercepted and shot down by a Saudi Patriot missile.

The leaders of the STC heavily criticized Hadi’s parliamentary meeting, and hundreds of STC supporters reportedly gathered in Sayoun before the session to protest against the internationally recognized government. The STC’s vice president, Hani bin Braik, threatened to retaliate against Hadi loyalists if security forces attacked the STC supporters.

In addition to a clear issue of institutional legitimacy, the skirmishes over the meeting in Sayoun also shed further light on Hadramawt’s centrifugal forces. The governorate is de facto split politically into two distinct territories, with competing military forces and different external backers, one Saudi and the other Emirati.

On the one hand, Saudi Arabia supports Hadi-linked forces in the north, in Sayoun and Wadi Hadramawt. The Saudis are committed to the fate of the recognized Hadi government, but they also aim to protect their own border, which is under heavy pressure from Houthi attacks and ambushes to the west (around Jizan, Asir, and Najran).

On the other hand, the United Arab Emirates (UAE) backs the Hadrami Elite Forces, which are deployed along the governorate’s southern coast. The Emiratis organized, trained, and equipped the Yemeni elite force, which played a decisive role in ousting AQAP from Mukalla in 2016 and subsequently reducing jihadi hotbeds in the interior. In doing so, the UAE has been able to indirectly gain new geopolitical leverage over commercial ports, military outposts, and the oil terminal in Hadramawt (Bir ‘Ali), as well as strategic depth toward the Indian Ocean.

Notwithstanding their distinct agendas in southern Yemen — where the Houthis are no longer present — Saudi Arabia and the UAE are likely to reach a political compromise on Hadramawt, informally agreeing to consolidate their emerging “northern” and “southern” spheres of influence inside the governorate in order to fulfil both of their national interests.

However, local political groups and militias may not be quite so eager to compromise, as they try to profit from the chaos of war and external patronage. Moreover, there may be other hurdles to overcome as well. Many of the forces deployed in the north of Hadramawt have tight linkages with Sanaa-based networks of power led by the Saleh family and Ali Mohsin. These networks are often perceived as northerners by most Hadramis, while the Hadrami Elite Forces are deeply rooted in the local tribal fabric. If President Hadi and the STC continue to disagree on Yemen’s future and political framework, clashes are likely to erupt in Hadramawt. Interestingly, this could mainly occur between regular forces, since the Hadrami Elite Forces are now technically part of the Yemeni army (as the 1st Military District), underlying the complexity of Yemen’s balance of security.

Eleonora Ardemagni is an Associate Research Fellow at the Italian Institute for International Political Studies (ISPI) and Teaching Assistant at the Catholic University of Milan. The views she expresses are strictly her own.