The two pillars of the Abraham Accords 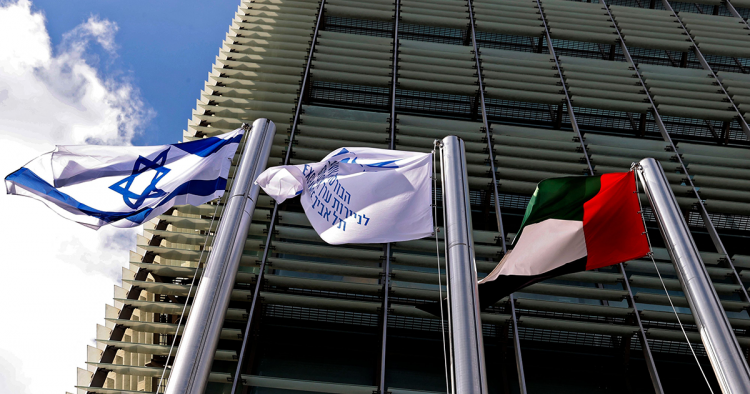 It has been a year since the August 2020 announcement of the Abraham Accords, which normalized diplomatic relations between the UAE and Israel. The accords were later signed at a White House ceremony attended by President Donald Trump that September. In less than a year the UAE and Israel swiftly exchanged ambassadors. This was the highlight of the first year of normalizing relations between Tel Aviv and Abu Dhabi. During their first year the accords also successfully passed the unexpected, brutal test of the 11-day military escalation between Israel and Hamas that began in late May 2021.

The one clear lesson of the past year is that the Abraham Accords are here to stay. However, it is becoming ever clearer that they are evolving into two unequal pillars: one pragmatic and the other idealistic. The former is deeply rooted in the national interests of the two countries. This pillar is proving to be very promising and solid, and it has the potential to evolve and get stronger by the day.

The latter idealistic pillar, which promises to deliver peace, regional stability, and change people’s mindsets, turning enemies into friends, as essential as it is to the thinking behind the accords, is rather weak and not as promising. It is unlikely to gain steam in the foreseeable future.

The Abraham Accords did not come out of a vacuum. We know now that they were the culmination of near 15 years of mostly tacit relationships and long conversations between key officials of the two countries. These conversations were mature, multi-faceted, wide ranging, and focused on common strategic concerns and regional threats. They apparently delivered tangible results along the way as well.

The UAE was ready to sign the bilateral peace treaty and was just waiting for the right moment to go public. Similarly expansive tacit relationships exist between Israel and most Arab Gulf states. Normalization is becoming a strategic necessity for some of them and is politically inevitable for almost all of them. The UAE was confident enough to take the risky decision to be the first Arab Gulf state to declare peace with the 70-year-old enemy.

The historic component of the Abraham Accords eventually evolved into a pragmatic pillar of infinite possibilities. The UAE came to the agreement driven by a simple, realistic line of thinking that says five wars and a 70-year-long boycott did not make Israel any weaker. Rather, Israel has become a fact of life and is a strong state recognized by 163 countries. There was a need to create a new norm in the Arab-Israeli conflict, the longest regional conflict in recent history. The current status quo is unsustainable.

The UAE was also thinking of its own national interest. It saw the many investment opportunities and strategic benefits of having an open relationship with Israel. For instance, the accords strengthen the U.S.-UAE relationship. In April 2021 the new Biden administration quietly okayed a plan to sell $23 billion worth of advanced weapons, including 50 state-of-the-art F-35 airplanes, to the UAE. The accords also consolidated the UAE’s role and image as a peace maker globally, and surely raised the country’s regional standing as an emerging middle power. The agreement made the UAE feel more, not less, secure by being a strategic partner of Israel. The post-oil UAE economy will greatly benefit from Israel’s scientific and technological advances. The results of the accords’ first year are convincing, especially as the country is focused on developing its knowledge economy and digital sector. Finally, the agreement also has the potential to strength the anti-Iran axis in the region.

As the UAE and Israel celebrate the first anniversary of the Abraham Accords, they have plenty of positive results to show. The national interest component of the accords is convincing. It is the agreement’s idealistic component, however, that is in great doubt and is rightly open to question. After all the Abraham Accords were sold to the public with noble goals. They are supposed to serve as the foundation for a comprehensive peace across the region. The authors of the accords aim to change people’s mindsets, from being enemies to being friends. None of these lofty promises materialized during the first year of the accords. No one is celebrating peace in Israel, the UAE, or the U.S.

The real challenge to this idealistic pillar of the accords is Israel itself. Put succinctly, Israel is in no mood to make peace with the Palestinians. Its new fragile coalition government favors building new settlements on Palestinian land. The majority in Israel oppose the two-state solution. More than 80% are adamantly against the Palestinians having an independent state of their own. Israel is yet to accept the very generous 2002 Arab Peace Initiative adopted by 22 Arab states at the Beirut Summit.

As a result, there is no realistic chance that the Abraham Accords will deliver on this idealistic pillar anytime soon. They lack the teeth needed to force Israel to make these historical accords stand on two solid pillars.

Abdulkhaleq Abdulla is a professor of political science from the UAE. The opinions expressed in this piece are his own.