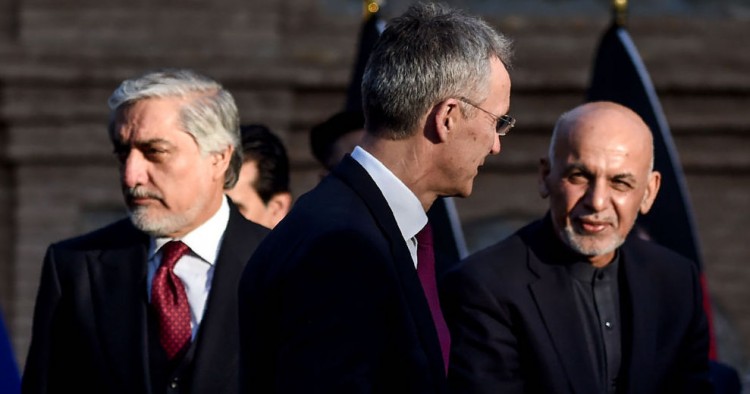 On March 9, Afghanistan’s sitting president, Ashraf Ghani, took the oath of office for a second term. However, on the same day the country’s chief executive, Abdullah Abdullah, also declared himself president at a rival swearing-in ceremony. Both men claimed to have triumphed in the presidential elections held last September, but Ghani was officially declared the winner by the Independent Election Commission of Afghanistan. The controversy has plunged the country into further political uncertainty and potential chaos, dashing hopes of an immediate return to peace following the historic U.S.-Taliban deal on Feb. 29, signed in Doha after more than two years of diplomatic back and forth, during which the Kabul government was relegated to the role of spectator.

It is telling that the Taliban had to remind the country’s political leadership to focus on intra-Afghan talks instead of fighting among themselves. Taliban spokesman Zabihullah Mujahid said, “Instead of swearing in, we want them [Ghani and Abdullah] to focus on intra-Afghan talks. We call upon them to leave the internal disagreements … and work for peace.” While the sentiment is admirable, this will be difficult to implement. Another Taliban spokesman Suhail Shaheen also felt that the political standoff is “not a good sign for prospects of peace in the country.” Despite last-ditch efforts to mediate between the two, Ghani and Abdullah remained adamant and held simultaneous inauguration ceremonies.

However, Ghani seemed to have more international legitimacy, as the U.S. special envoy to Afghanistan, Zalmay Khalilzad; the commander of U.S. forces in Afghanistan, Gen. Scott Miller; and the ambassadors of Canada, Australia, Denmark, Germany, and Norway all attended his inauguration. For his part, Abdullah wrote on Twitter that “no one should have underestimated our commitment to genuine democracy. … Invalidation of all fraudulent votes is the way out.” Days before, Abdullah escaped unhurt from a terror attack claimed by Islamic State-Khorasan Province (ISKP), which saw more than 30 people killed. It was the first major attack in Kabul since the U.S.-Taliban deal.

The dispute between the two men is rooted in the controversial results of Afghanistan’s bitterly contested Sept. 28 presidential election, which were described by Abdullah as nontransparent and fraudulent. Ghani won with just over 50 percent of the vote, while Abdullah secured second place with around 39 percent. It is worth recalling that the 2014 presidential election was equally controversial, leading to months of political chaos in Afghanistan. However, Washington’s intervention at the time settled the dispute under an elite bargain that allowed Ghani to become president and Abdullah to hold the newly created office of chief executive, maintaining a modicum of political stability despite differences between the two on many important issues.

The U.S.-Taliban deal is not a complete peace treaty; it is merely an agreement to get the Taliban and the Kabul government together at the negotiating table, and therefore the first major step toward bringing peace and stability to war-torn Afghanistan. A timetable for a gradual drawdown of U.S. troops has been decided. After an initial reduction to 8,600 troops — from an estimated 13,000 — within 135 days, the U.S. will complete the withdrawal of all remaining forces within 14 months. Even as the rival leaders were each sworn in as president, U.S. Forces Afghanistan began its conditions-based reduction, as announced by Col. Sonny Leggett. However, Defense Secretary Mark Esper said on March 2 that Gen. Miller will conduct an assessment of the realities on the ground once the troop level reaches 8,600.

For both ISKP and al-Qaeda in the Indian Subcontinent, the U.S. exit and ensuing reconciliation process will bring much-needed relief, as both terror groups were major targets of lethal U.S.-led drone strikes. However, the Taliban has agreed to give guarantees that it would not permit transnational terrorist groups to operate from the territory under its control. The intra-Afghan talks between the Taliban and the Afghan government were due to begin by March 10. But immediately after the Doha deal, Ghani refused to free 5,000 Taliban prisoners, arguing that such a release “cannot be a prerequisite for talks.” However, he later agreed to release the prisoners in order to secure U.S. and other international endorsement for his inauguration as president.

It is election year in the U.S. and the supporters of President Donald Trump will hail the deal as a huge foreign policy accomplishment. But we should not forget that the success of the agreement depends heavily on how the talks between the Taliban and the Kabul administration progress, a process over which Pakistan has sizeable influence. There is no doubt that Pakistan ensured that the U.S.-Taliban talks were successful. Pakistan’s foreign minister, Shah Mahmood Qureshi, claimed on Feb. 22 that U.S. Secretary of State Mike Pompeo told him that “the pathway to fixing relations between Pakistan and [the] U.S. came through Kabul. Now I would like to remind him that we have fulfilled all our promises.” Pakistan’s standing in the region will likely get a boost from its key role in helping to work out the deal, leading to a potential rapprochement between Washington and Islamabad.

What seems worrying at the moment is the Trump administration’s apparent lack of interest in the Afghan peace process beyond the troop withdrawal. Trump has said that “it will be the Taliban and it could be surrounding countries” that would counter terrorism in the region, implying that the Taliban is a U.S. partner going forward. His warning that “if bad things happen, we’ll go back with a force like no-one’s ever seen” seems to some like mere rhetoric.

The Taliban commanders are already jubilant and have boasted of defeating the U.S. The deal is being projected as a “victory” on social media platforms sympathetic to the Taliban. That is why, in a joint statement released in connection with the deal, Washington and Moscow, while welcoming the Taliban’s commitment to a political process, have both reaffirmed that the international community does not recognize and “will not accept or support the restoration of the Islamic Emirate of Afghanistan,” referring to the official name the Taliban uses for itself. Concerns that a complete Taliban takeover would undermine the progress that has been achieved in the past two decades, in terms of women’s rights and access to education, are by no means unfounded. Seeking to allay such fears, in an opinion piece in The New York Times on Feb. 20, Sirajuddin Haqqani, the leader of the Haqqani network, asserted that “liberated from foreign domination and interference, we together will find a way to build an Islamic system in which all Afghans have equal rights, where the rights of women that are granted by Islam — from the right to education to the right to work — are protected, and where merit is the basis for equal opportunity.”

It remains to be seen how the Taliban will push the level of violence down to a point where other key Afghan stakeholders could engage in dialogue with them in a constructive manner. However, with an upper hand on the battlefield coupled with Trump’s desperation to leave Afghanistan due to war fatigue, it will be extremely difficult to make the Taliban commit to the agreed terms of the deal and stop them from reestablishing an Islamic emirate. Will an American exit from Afghanistan not make it easier for the Taliban to overthrow the Kabul government? Asked whether the Taliban might overrun the country, Trump remarked on March 6 that “it’s not supposed to happen that way but it possibly will … countries have to take care of themselves.”

But the most important question is about the preparedness of the Kabul government to negotiate with the Taliban. Frankly speaking, its position vis-à-vis the Taliban has always been fragile, and, in immediate terms, the Ghani-Abdullah standoff has triggered a political crisis that may spill over into violence and derail the deal. This avoidable dispute would severely affect the Kabul administration’s position in the intra-Afghan talks. What can the U.S. government do to mitigate the distrust between Afghanistan’s two biggest political figures? It may well end up playing the intermediary, but for now, it is not yet clear if 2020 will see a repeat of the 2014 power-sharing deal.