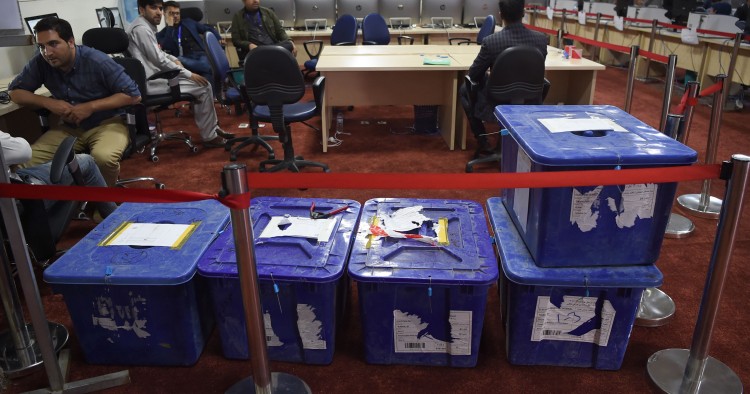 In a move that surprised no one, on Oct. 19 the Afghan election commission said it was unable to announce the preliminary results of the Sept. 28 presidential election as planned, due to delays in processing biometric data. Held amid political uncertainty, terrorist violence, and general skepticism, the September election was the fourth presidential contest in Afghanistan since 2001, when the brutal Taliban regime was toppled in the wake of the Sept. 11 terror attacks on the United States.

Delayed twice due to sharp divisions within the Afghan government and the progress of U.S.-Afghan Taliban peace talks, the presidential election was marred by accusations and counter-accusations of misconduct and fraud, and voter turnout was among the lowest of any Afghan poll to date. Widespread mismanagement, irregularities, and the threat of violence deprived hundreds of thousands of Afghans of the chance to vote, and more than 4,500 election-related complaints were officially registered.

According to a report released by the UN Assistance Mission in Afghanistan (UNAMA) on Oct. 15, terrorist attacks aimed at disrupting the electoral process killed 85 and wounded more than 370 people. The Taliban carried out a deliberate and vicious campaign of abductions, intimidation, and harassment against civilians in the run-up to the election, and as a result, there was almost no campaigning by candidates, even though more than 70,000 security personnel were deployed across the country.

The Afghan election commission is now facing huge technical and logistical issues in gathering and transferring data from more than 26,000 biometric machines used to record fingerprints and pictures of voters in around 5,000 polling booths to its central servers. Claims of victory by rival candidates have already raised serious question marks over the transparency of the entire electoral process. Representatives of the two front-runners, President Ashraf Ghani and CEO Abdullah Abdullah, came out with statements claiming they had won before the election commission had even finished counting the votes. Amid rising mistrust and a legitimacy crisis, Alice Wells, U.S. assistant secretary of state for South and Central Asia, during a visit to Kabul on Oct. 15, stressed the need for a transparent vote in separate talks with both Ghani and Abdullah. She also advised the election commission that given the “challenging task to review votes, process complaints, concerns, and allegations of fraud,” it was better to “deliver an accurate result rather than a rushed one.”

Much of the skepticism about the election stemmed from the widespread belief among Afghans that holding a presidential vote before finalizing a peace deal with the Taliban was an ill-timed exercise. Former Afghan President Hamid Karzai was sharply critical of the idea, comparing it to “asking a heart patient to run a marathon.” He called for the election to be scrapped as Afghanistan was passing through a period of deep political uncertainty. A number of well-known Afghan politicians, including former Vice President Yunus Qanooni, former Balkh Governor Ata Mohammad Noor, former Minister Mohammad Ismail Khan, and former National Security Adviser Rangin Dadfar Spanta, among others, demanded the elections be postponed and the U.S.-Taliban negotiations be resumed immediately.

But President Ghani was reluctant to postpone the elections further as his advisors and supporters argued that it would only strengthen the Taliban, while also delaying intra-Afghan talks. The Ghani regime has been critical of its marginalization in the U.S.-Taliban peace process. With the legitimacy of the election now under a cloud, the Taliban could exploit the opportunity to push a narrative of massive electoral fraud, undermining faith in the results and potentially sparking violence.

Such a scenario would not be unusual in Afghanistan, where elections have always been notoriously flawed. The 2009 and 2014 presidential elections were mired in allegations of widespread mismanagement, corruption, and fraud. In 2014, facing a deadlock tie between Ghani and Abdullah, with neither party willing to concede, the U.S. had to work behind the scenes to arrange a power-sharing deal between them.

The U.S. may well have to repeat this exercise if any of the leading presidential contenders refuses to accept defeat. To manage a clear victory, a candidate must secure more than 50 percent of the votes. If no one receives a majority, the top two candidates will face off in a run-off election. Above and beyond the election itself, any crisis related to contested results would surely disrupt the chances of reviving the U.S.-Taliban talks. Whatever the outcome, it is likely to intensify political polarization in an already fractured and violent Afghanistan. The latest figures released by the UN put civilian deaths this year at a record high, up 42 percent as compared to the same period last year. July was the single deadliest month in terms of civilian casualties since the UN began documenting them in 2009.

If the winner believes that he would be able to make the Taliban talk directly to Kabul instead of resuming the stalled peace process with U.S special envoy Zalmay Khalilzad, he is sorely mistaken, however. There is no indication from either the insurgents or Khalilzad that the Kabul regime would have any meaningful role before a deal is finalized. Although China is going to host a fresh round of intra-Afghan talks between the Taliban and Afghanistan’s rival factions, Afghan officials will once again join in their personal capacity, as they have done in the past. For his part, Pakistani Prime Minister Imran Khan reportedly told U.S. officials during his meetings on the sidelines of the U.N. General Assembly that Islamabad would help Washington to resume the Afghan peace process. The wheels are already in motion. Khalilzad’s trip to Islamabad in early October at the same time as a 12-member high-level Afghan Taliban delegation, led by Mullah Abdul Ghani Baradar, was especially significant, and Gen. Austin S. Miller, the U.S. commander in Afghanistan, was also in Islamabad at the time as well. Though there were reports of a meeting between Khalilzad and Baradar, the U.S. has not described it as an official one. Given that previous meetings were held in Qatar, it undoubtedly took place under the aegis of Pakistan.

That the Trump administration overlooked Pakistan’s decision to give state protocol to the Afghan Taliban has been interpreted as a sign of America’s desperation to restart negotiations. The fact that the Taliban delegation officially met the Pakistani prime minister as well as Foreign Minister Shah Mahmood Qureshi was a clear indication that Pakistan is confident that its treatment of the insurgents as a “de facto” Afghan government would no longer be viewed as beyond the pale by Washington. The U.S. seriousness about restarting the talks became even clearer when Defense Secretary Mark Esper made an unscheduled trip to Kabul on Oct. 20 to emphasize the need for “a peace agreement at some point, a political agreement ... that meets our ends and meets the goals we want to achieve.” His visit was also designed to reassure the Afghan government about Washington’s commitment to its allies following the sudden withdrawal of American troops from Syria — a move that has created another layer of uncertainty in Afghanistan. Briefly overlapping with Esper’s visit, the U.S. House Speaker Nancy Pelosi also led a congressional delegation to Afghanistan “to conduct effective oversight” of America’s mission in Afghanistan.

There is no doubt that the U.S. is fed up with its “longest war.” The question is not if but how the Trump administration will ensure a U.S. exit from Afghanistan. But who in the U.S would accept a meeting between Trump and the Taliban leaders in the White House? Trump needs a new narrative to end the war. The restart of negotiations between the U.S. and the Taliban without a fresh narrative, one going beyond just war weariness and the military stalemate, would be exploited both by the Taliban and Pakistan — and this could have debilitating consequences for the entire region.