Violence and Peace Spoilers in the Southern Philippines 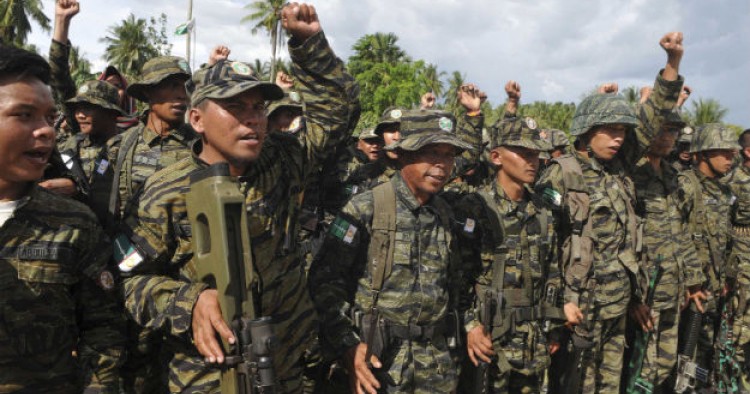 What makes recent spoiling distinct is its origin in intra-sectarian disagreements over who truly represents the interests of the Bangsamoro. Armed groups, led by charismatic figures such as Ustadz Habier Malik and Ameril Umbra Kato, have gained notoriety through their profligate use of violence. This essay concludes by stressing that the prevailing socioeconomic milieu in the Southern Philippines—characterized by small arms proliferation and a weak rule of law—sustains latent enablers for sectarian conflict.

Pragmatism by the Bangsamoro: From secession to autonomy

The essence of the Mindanao conflict is often cast as a sectarian response to the real and perceived domination of Filipino Muslims by the majority-Christian population. State-sponsored homestead and resettlement policies adopted after the Second World War led to an irreversible demographic shift that minoritized Muslims in Mindanao. The emergence of Christian militias, like the Ilaga,[1] was met by the formation of Muslim militias.

Organized armed secession in Mindanao is associated with the formation of the Moro National Liberation Front (MNLF). Led by University of the Philippines professor Nur Misuari, the MNLF fought for the establishment of a Bangsamoro, or “Moro Nation.” Widespread fighting in Mindanao prompted the GPH and the MNLF to accede to the 1976 Tripoli Agreement. Brokered by the Organisation of Islamic Conference (OIC), this agreement called for the “establishment of Autonomy in the Southern Philippines”[2] within the bounds of the Philippine state.

In a surprising development, MILF founder Hashim Salamat personally wrote to U.S. President George W. Bush[5], thereby signaling the movement’s paradigm shift from an armed secessionist group to a political group with aspirations to transition into mainstream politics. A series of informal and official talks with the Philippine government led to the crafting of a draft Memorandum of Agreement on Ancestral Domain (MOA-AD) in August 2008, which was completed and initialed through Malaysian facilitation. Under the Memorandum, a new political entity named the Bangsamoro would be established to replace and expand upon the powers of the Autonomous Region in Muslim Mindanao (ARMM).

Optimism over the MOA-AD was short-lived as various interest groups voiced their displeasure over the signing of the draft document. What followed amounted to a series of “spoiling” activities—disruptions, often violent in nature, by actors opposed to a peaceful settlement.[6] The loudest MOA-AD opponent was Manny Piñol, the Christian Vice Governor of North Cotabato who claimed that the pact had been forged in secret without community consultations. Piñol and other like-minded public intellectuals expressed fears that the prospective Bangsamoro would lead to the subjugation of Christian majority areas in Mindanao.

Dogmatic claims to ideology are effectively justifications for inter-sectarian violence, which are overlaid atop socioeconomic schisms. Relative deprivation and economic inequality, rather than ideology, are the root causes of armed conflict in the Philippines as identified in the 2005 Philippine Human Development Report—to date the most definitive study on internal conflict.[9] This claim is tacitly reiterated in the AFP's own national counterinsurgency plan,[10] which took effect in January 2011.

The renewed peace negotiations led by the Aquino Administration in 2012 culminated with the signing of the CAB on 27 March 2014. Contrary to the controversy triggered by the MOA-AD, the lead up to the CAB was met with grassroots-level support. Illustrative of the success of the consultations was the support of formerly adversarial personalities, including Vice Governor Piñol himself.[11]

Ustadz Habier Malik assumed authority as the military commander of a small but violent faction loyal to Nur Misuari, after the latter was eased out by mainstream MNLF factions committed to the terms of the 1996 FPA. Malik is well known for his exploits, including successful evasion of the massive military sweeps in 2001 and 2007 that were conducted in response to his hostage-taking activities and other atrocities. Those offenses were themselves a reaction against the purported marginalization of Misuari and Malik. Malik’s ability to mobilize his followers is testament to his charisma, despite the corruption that led to Misuari's downfall as ARMM governor.

Before dawn on 9 September 2013, Malik and around 500 of his armed followers launched an assault against Zamboanga City under the pretext of a peaceful political rally.[12] Malik and his men were based in Sulu, off the coast of Zamboanga City. Dubbed the Zamboanga City Crisis, it was considered the largest urban warfare scenario involving the AFP. Weeks of fighting resulted in hundreds of MNLF-MG casualties and the destruction of 10,000 homes. Fortunately, the containment of the crisis within the bounds of the city prevented the conflict from spreading into other tense areas, such as the North Cotabato-Maguindanao border. The losses incurred by Malik’s group also cast doubt on whether the MNLF-MG can still be considered a viable armed group.

Kato’s vow to disrupt the peace process was met by Operation Dark Horse from late January to early February 2014. The campaign in Kato’s stronghold was a qualified success, with all major BIFM encampments captured—including their headquarters and IED-making factory. Fast forward to the signing of the CAB, and the absence of violent reprisals from the BIFM appears to indicate that the movement's capacity to wage war has been seriously degraded.

Malik and Kato’s fates remain uncertain in the aftermath of the AFP operations. Malik, whose body has not been recovered, is believed to have succumbed to wounds incurred while fighting AFP special operations forces in Zamboanga. Kato reportedly escaped Dark Horse, albeit afflicted by a debilitating stroke. The shadow cast by these men—dead  or alive—underscores the deep roots of a conflict that would not disappear overnight after the signing of a peace agreement.

Second, the challenge of institutionalizing the rule of law—especially in Mindanao—remains a valid concern. The 1996 FPA between the Philippines and the MNLF resulted in the political autonomy that incumbent Philippine President Benigno Aquino III would decry as a “failed experiment” decades later.[14] Wracked by allegations of corruption and bureaucratic ineptitude, local governments in Mindanao failed to address the issues of relative deprivation and economic inequality. As of the end of the year 2013, the ARMM remains the poorest region in the Philippines.

References to “us-versus-them” narratives by both the Bangsamoro and various Christian groups—the  hallmark of inter-sectarian conflict—are better assessed as an inertial continuation of pre-Tripoli Agreement conditions. It is clear from this discussion that fixating on the salience of ideology and inter-sectarian tensions fails to account for the material and intra-sectarian factors that fuel the Mindanao conflict. Only time will tell if the Comprehensive Agreement on the Bangsamoro will lead to tangible improvements in the lives of Muslim Filipinos. Without changes in the socio-economic milieu, the enablers of sectarian conflict will loom over any attempt at peace, and will retain the ability to restart generational conflict in the Southern Philippines.

[1] Ilaga is the indigenous word for “rat” among the Christian settlers from the Central Philippines who moved into Mindanao en masse.

[4] Term used by the Armed Forces of the Philippines to refer to members of international terrorist groups subscribing to Islamist ideologies, such as the Jemaah Islamiyah and Al- Qaeda.