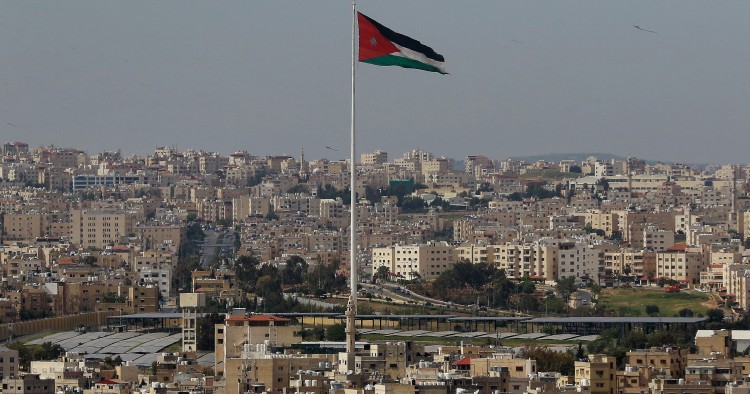 Jordan, like the rest of the world, has been focused on containing the spread of the novel coronavirus by adopting strict measures including imposing a total lockdown, border closures, and quarantine of the infected, as well as isolating virus-free governorates. Its efforts, considered among the toughest in the region, appear to be bearing fruit. Until the end of April, it had fewer than 500 cases and 9 deaths. During the first four days of May it had zero new infections.

The government’s attention has now shifted to reviving the stalled economy, which according to the IMF will shrink this year by 3.7 percent. Jordanians are waking up to the reality that economic recovery will be slow and painful.

But even as it pooled its resources toward fighting the virus, Jordan has been closely watching political developments in Israel, where incumbent Prime Minister Benjamin Netanyahu was able to negotiate a deal with rival Benny Gantz, head of the Blue and White coalition, to form a national unity government. That deal, now also backed by Labor, allows Netanyahu, who will retain his position for the next 18 months, to put to a vote a motion to annex major parts of the West Bank, including the Jordan Valley, as early as next July.

Before the outbreak of the pandemic, Jordan was in the forefront of countries rejecting Netanyahu’s annexation pledge while tacitly rebuffing Trump’s “deal of the century” plan, which he unveiled last January. King Abdullah has continued to rally regional and international support for the classical two-state solution based on the land-for-peace offering as stipulated in the 2002 Arab Peace Initiative. That offer was never embraced by Israeli leaders.

Last September King Abdullah told a U.S. television network that the annexation of the Jordan Valley will not only kill the two-state solution but threatens peace treaties between Jordan and Egypt, on the one hand, and Israel on the other.

For Jordan Israeli annexation of Jewish settlements in the West Bank, as well as the strategically important Jordan Valley, constitutes an existential threat to the kingdom. Some Jordanian jurists and officials say it also violates the Jordan-Israel peace treaty. From a Palestinian and Jordanian perspective, Trump’s plan will lead to the creation of a non-viable, non-contiguous entity that lacks sovereignty and is completely dependent on Israel for its survival. It denies the Palestinians political rights over East Jerusalem, the future capital of the Palestinian state, an issue that is supported by a majority of countries. The map for the future Palestinian state, as suggested by the White House, presents Swiss cheese-like clusters of Palestinian population centers disengaged from one another.

For Jordan the death of the two-state solution raises questions about the fate of almost two million Palestinian refugees in the kingdom. It conjures up Israeli far-right allegations that Jordan is a Palestinian state and threatens what King Abdullah sees as his birth-right role as the custodian of Muslim holy sites in East Jerusalem, including Al-Aqsa Mosque, which has been at the center of tensions between Jordan and Israel over the past years.

Furthermore, Jordan fears that it would be pressured to take up a future administrative role over Palestinian population centers in the wake of the possible collapse of the Palestinian Authority (PA) in the West Bank.

Despite the sensitivity of the kingdom's strategic ties to the United States — Jordan is heavily dependent on U.S. economic and military aid — King Abdullah emerged as one of the key critics of Trump’s policy on the Israel-Palestine conflict. He openly criticized Trump’s decision in 2017 to recognize Jerusalem as Israel’s capital and to relocate the U.S. embassy from Tel Aviv. Jordan was quick to lead an international campaign to raise funds for UNRWA, the UN body responsible for Palestine refugees, following the U.S. decision in 2018 to cut off aid to the agency.

Economic fallout from the coronavirus

But now Jordan faces unprecedented economic hardship as a consequence of the coronavirus crisis. Its geopolitical standing has been affected by reverberations from the pandemic across the region. Oil prices have plummeted, thus weakening the economies of Gulf countries where tens of thousands of Jordanian expatriates could lose their jobs and be pushed to return to the kingdom. Two key regional players, Saudi Arabia and Egypt, are embroiled in the fight against the virus. There are genuine fears here that the pandemic will rearrange regional priorities and the central cause of Palestine will be pushed to the back burner.

So the question is what could Jordan’s reaction be if Netanyahu goes ahead with unilateral annexation as soon as next July? Can Jordan afford to suspend its peace treaty with Israel, as many lawmakers and activists have demanded, thus risking its strategic ties with Washington? Until the outbreak of the pandemic, the national mood was in favor of punishing Israel. Jordanians were pressuring the government to abrogate a controversial ten-year, multi-billion-dollar liquid gas deal with an Israeli company. They praised King Abdullah’s decision in November 2018 not to renew a land lease agreement with Israel under the peace treaty. They celebrated the return to Jordan’s sovereignty of two land parcels from Israel last November.

King Abdullah and Netanyahu have not been in contact for years and it is no secret that there is no love lost between the two men.

But now one wonders if Jordan can afford to be defiant, if and when Israel goes ahead with annexation. It knows that it can expect a lukewarm reaction from Arab states, some of which are working to normalize ties with Israel directly and unilaterally. Netanyahu paid an historic public visit to Oman in October 2018, upon the invitation of the late Sultan Qaboos, and last February he met the leader of Sudan’s military council, Abdel Fattah al-Burhan, in Uganda. Netanyahu bragged in June 2019 that Israel has contacts with most Arab countries.

What is Washington saying?

One silver lining may come from the Trump administration itself. On April 30 Axios quoted a senior U.S. official that any Israeli annexation must come “in the context of an offer to the Palestinians to achieve statehood based upon specific terms, conditions, territorial dimensions, and generous economic support.” It added that U.S. ambassador to Israel, David Friedman, told Netanyahu’s aides “the U.S. wants to implement a peace plan, not an annexation plan.”

But according to my sources Jordan is taking the statement with a pinch of salt. One source said that it doesn’t matter who says what in Washington at this stage. Secretary of State Mike Pompeo said on April 22 that it was up to Israel whether to annex parts of the West Bank and that Washington would offer its views privately to Israel’s new government. On the other hand, one source told me that it is Jared Kushner, Trump’s son-in-law and the head of the peace team at the White House, who will ultimately call the shots.

This writer has learned that Jordan has “advised” Palestinian President Mahmoud Abbas, who had rejected Trump’s plan almost immediately, to make a counter offer and thus engage Trump’s White House in fresh negotiations. Delaying what seems to be an inevitable outcome is Jordan’s strategy — for now. It hopes that Palestinian engagement may push back Netanyahu’s move until late this year, close to the U.S. presidential elections. Jordan is also pinning some hope on the weak chance that Netanyahu may miss the deadline to form a government on May 7 and that Israel will head for a fourth election.

Meanwhile, Jordan is sticking to its official position on the annexation plan. In the midst of the coronavirus crisis Jordanian Foreign Minister Ayman Safadi made a number of telephone calls on April 25 to his counterparts around the world, including the foreign ministers of Russia, Germany, and Egypt, urging them to put pressure on the new Israeli government not to go ahead with planned annexation.

Jordan will make its objections loud and clear if Netanyahu does go ahead with any form of annexation — be it Jewish settlements only or/and the Jordan Valley. The level of its reaction may depend on the extent of the annexation and whether or not it includes the Jordan Valley. But in the aftermath of the coronavirus crisis Amman knows it has a narrower margin for action. It is unlikely to go as far as suspending the peace treaty with Israel. Its main, but not only choice, will be to resort to diplomacy, knowing very well that little can be achieved on that front in a world that is overwhelmed by the pandemic crisis.