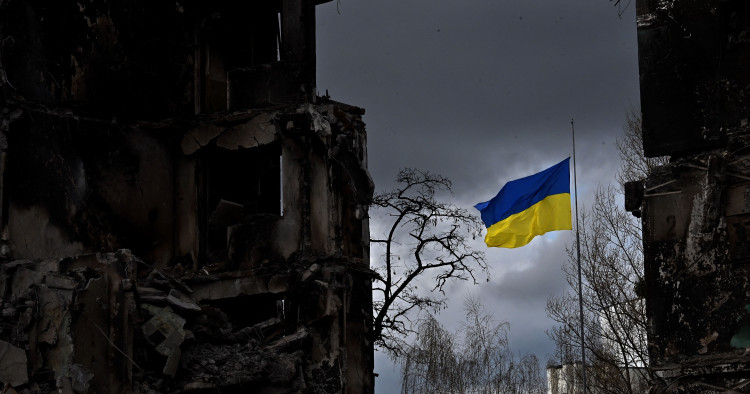 Historically, Russia has escaped accountability for the war crimes it has committed. The war in Ukraine must not follow the same path. Otherwise, the entire international security architecture will bear the consequences of such impunity. Having an international legal system that is only fit to prosecute a small number of perpetrators puts the burden of war crimes prosecution on Ukraine’s national judicial system, which is over-stretched and faces numerous challenges.

On Sept. 23, during the 51st session of the United Nations Human Rights Council, this international body confirmed that Russian or Russia-backed forces committed war crimes against Ukrainians inside Ukraine’s borders. The report references more than 150 interviews with victims and witnesses who testified about “sites of destruction, graves, places of detention and torture” across 27 towns and settlements. And yet the prosecution of those crimes is likely to be lengthy, problematic, and hard to prove, casting doubt on Ukraine’s and the international community’s ability to bring Russia to justice.

With the recent liberation by Ukrainian forces of the city of Kherson, President Volodymyr Zelenskyy revealed that investigators have already collected evidence of more than 400 Russian war crimes in areas in and around the city. Although the specifics of most of these incidents have yet to be revealed publicly, the Ukrainian parliament’s human rights commissioner has released a video of a “torture chamber” where 63 bodies were found with signs of torture.

A history of Russian impunity

Looking back in history, the Russian Federation was never meaningfully held accountable for atrocities committed during its earlier conflicts in Chechnya, Georgia, or Syria. Moreover, Russia has not ratified the 1998 Rome Statute, which means that the International Criminal Court (ICC) does not have jurisdiction over it. Recently, Moscow left the Council of Europe, thus removing the European Court of Human Rights’ jurisdiction over Russian actions. And Russia is a permanent, veto-wielding member of the United Nations Security Council, which allows it to block any attempt by the U.N. to create an international tribunal for this purpose. To date, Russia has effectively never been prosecuted for its perpetration of any war crimes thanks to Moscow’s ability to circumvent and manipulate existing international law.

War crimes committed by the Russian forces in Ukraine

Russia began perpetrating war crimes in Ukraine in 2014, as part of its forced annexation of Crimea and upon launching the war in Donbas. Recorded examples included forced conscription, kidnappings, detentions, and torture. The prosecution of these cases legally had to go through local Ukrainian courts, but these were not functioning because of the war. Meanwhile, international bodies were chronically slow to act because of the difficulty of obtaining evidence from the occupied territories.

Today, Russia not only carries out the same kinds of battlefield atrocities that it employed in past conflicts, such as Chechnya, Georgia, and Syria, but in many cases, these involve the same people, including a number of the Russian military’s top commanding officers. As such, the strategy of using war crimes to intimidate civilians has now become an inseparable part of Russian warfare. According to the former Ukrainian ombudsman for human rights, Lyudmyla Denisova, the list of crimes Russian soldiers have been accused of committing in the occupied territories since Feb. 24, 2022, includes rapes of individuals ranging from 6-month-old babies to 83-year-olds of all genders; the use of filtration camps; torture; forced deportations to Russia; fast-track legislation in Russia to adopt forcibly taken children from occupied Ukrainian cities; dehumanizing practices against detainees, such as “putting people in cages” and psychological intimidation; mobilization of Ukrainians in the occupied territories to fight in the war against Ukraine; kidnappings; robberies; the employment of mobile crematoriums to hide evidence of torture or murder; and many more.

The prosecution of these Russian war crimes will again mostly fall on Ukraine’s legal system, which is far from perfect. The more than 25,000 war crime claims, which span the spectrum in terms of the scale of criminality, the wide scope of the affected geographical areas, and the high number of potential victims, pose a considerable challenge to a judicial system affected by an ongoing armed conflict with no end in sight. The ICC will probably be able to prosecute a handful of high-level perpetrators of some of the most notorious atrocities. However, it does not have jurisdiction over the crime of aggression — a grave breach of international law constituting a manifest violation of the U.N. Charter — because, like Russia, Ukraine also never signed the Rome Statute. This means that, barring the establishment of one or more international hybrid tribunals, domestic courts in Ukraine will need to prosecute the Russian perpetrators — a mammoth task for which they are completely unprepared and under-resourced. The creation of international or hybrid courts is time-consuming and very costly: prior such court processes cost between $10 million to $15 million per defendant. Unless wealthy countries like the United States and the United Kingdom fund the creation of similar courts, their establishment is unlikely.

Nevertheless, there are a few steps that, if implemented internationally, would help prosecute Russia, its regime, and citizens responsible for perpetrating notorious war-time abuses on Ukrainian soil.

First, it is imperative to start including financing for the war crimes prosecution process in the funding packages that the European Union and United States provide to Ukraine as support. This would help guarantee the functioning of local courts in Ukraine.

Second, monetary support and assistance for the ICC to investigate atrocities has to continue and perhaps even increase. The ICC’s budget is relatively small, and the ICC Office of the Prosecutor’s investigative team, on average, has only around 35 personnel and conducts fewer than 200 witness interviews, which is clearly not enough for the scale of the war crimes that took place in Ukraine. On March 2, 2022, the ICC Prosecutor officially opened an investigation into the situation in Ukraine on the basis of referrals from its State Parties. The scope encompasses any past and present allegations of war crimes, crimes against humanity, or genocide. Thus, having a larger operational capacity through greater financial support will not only bring justice and instill accountability but will carry with it vast publicity and ensure that Russia stays in the spotlight for the grave offenses it was found to have committed.

Third, to effectively prosecute and try Russian war crimes at the domestic level, Ukraine would benefit from greater and more institutionalized access to international expertise. Namely, Ukraine needs international judges or legal advisors to not only strengthen Ukraine’s domestic legal system but also serve as an additional guarantee of the independence, impartiality, and “maximum legitimacy” of its war crime trials.

Fourth, international support for and expansion of the current “mobile justice teams” should continue. The Office of the Prosecutor General of Ukraine established these so-called War Crime Units in May 2022, and experts from the Atrocity Crimes Advisory Group, established by the EU, U.S., and U.K., support their work.

As briefly alluded to above, being found guilty of war crimes will contribute to Russia’s international isolation, putting additional pressure on governments to scale back or terminate their cooperation with Moscow. At the moment, some of the poorest and most authoritarian states in Africa, the Middle East, and Latin America are also among the most open supporters of Russia’s invasion of Ukraine — or at the very least are most likely to tacitly acquiesce to it. To mask the failures of its “special military operation,” Moscow is, thus, trying to harness whatever strategic gains it made in the Middle East from its multiple interventions (military as well as economic and diplomatic) to now call in diplomatic favors from the recipients of its past assistance, including Syria, Libya, Saudi Arabia, Algeria, and Iran. Especially for the poorest or most isolated of these regional states, Russia’s status as a war criminal would probably change very little given their “patron-client” dynamics: their citizens are suffering the impacts of the faraway war on their food security, energy prices, and job markets, and so they will continue to choose Russia because it presents them with a “quick and cheap fix” for their problems. In contrast, bigger players such as China and Turkey will be much more likely to freeze their relations with a state convicted of war crimes so as to avoid having this association create obstacles to their access to Western markets.

Right now, the global community should prioritize supporting the Ukrainian and international legal systems in their efforts to prosecute Russia for its wartime atrocities. Were Moscow to escape accountability for its systematic campaign of barbaric war crimes, other authoritarian regimes worldwide would be further emboldened to use brutality in their own combat activities. Impunity breeds unlawfulness, an illusion of omnipotence, and more perverted forms of crimes. Prosecuting Russian atrocities is necessary not only to bring justice and satisfy popular moral outrage but also to further politically isolate Russia and dissuade other bad actors from emulating Moscow’s policies. Failure to prosecute Russia for the war crimes committed in the largest conventional military attack in Europe since World War II may damage international law and undermine global security for decades to come.

Maryna Venneri is a Ukrainian freelance writer providing policy analysis and academic research on the Eastern European region with a specific focus on civil war studies. She was previously a fellow with MEI's Frontier Europe Initiative working on Black Sea security.