What does the Saudi oil facility attack mean for Russia? 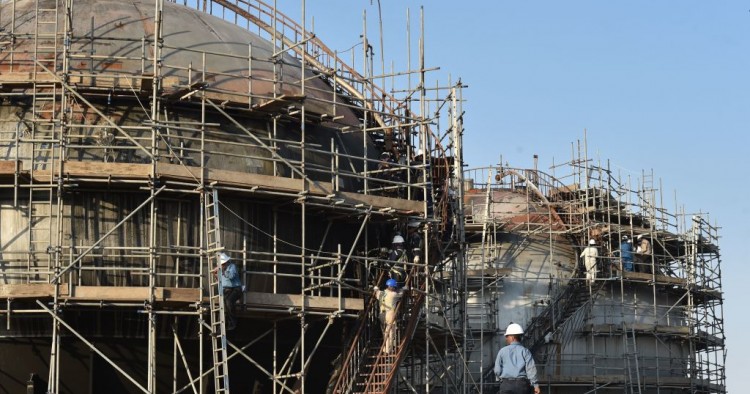 The Sept. 14 attack on key Saudi oil facilities, which knocked out over half of the kingdom’s oil production, has signaled a significant change in approach toward regional and global security. It’s clear that things won’t be the same again.

The attack reduced Saudi oil production by 5.7 million barrels per day (bpd), leading to a sharp rise in global oil prices of nearly 20%. Although this was a very important development from an energy and economic perspective, we should not underestimate the political and security ramifications either. The entire paradigm of a secure Gulf under the protection of the U.S. military umbrella has been undermined.

How does Russia benefit from the strike?

The recent attack demonstrated that the existing security framework in the Gulf, which is based on U.S. military assistance and cover, has started to crumble. The region with the world’s largest energy reserves and production levels now seems more volatile and insecure than it did before. Even countries under the U.S. military umbrella have been targets. This naturally undermines the security of Gulf oil supplies and increases the sensitivity of major oil consumers in Asia and Europe to energy security.

In this situation, the value of stable and secure energy supplies rises, which plays into Russia’s hands. Given its developed network of oil and gas pipelines running to Europe — and now extending toward Asia — Russia has a reputation as a reliable supplier. Moreover, Moscow’s capacity and ability to protect its vital energy infrastructure, which have not experienced major failures or attacks over the last several decades, further enhances this reputation. Put simply, Moscow doesn’t face the same security risks as Saudi Arabia, Iraq, or Iran when it comes to producing and supplying oil.

Russian Energy Minister Alexander Novak has already stated that there is no need to increase oil output within OPEC+ to compensate for the Saudi loss. Moreover, Russia is hardly in a position to significantly increase its oil production in short term to take additional market share. It has already reached a historic peak in recent years and pushing production higher quickly would be difficult. Moreover, Riyadh has announced that it would restore its lost production by the end of October and bring its capacity back to 12 million bpd by the end of November. Russia isn’t looking to exploit this situation as the partnership that it has built with Saudi Arabia over the last four years is more important than any short-term gains.

Growing tensions and escalation in the Gulf

Increased volatility in the region could easily slide into war, which would negatively influence many players, including Russia, as it would certainly change its relations with a number of regional actors and negatively affect its regional economic policy. As a result, Moscow has no interest in a continuation of the growing tensions in the Gulf. On Sept. 18 Russian President Vladimir Putin had a phone call with Saudi Crown Prince Mohammed bin Salman (MbS). The two discussed the recent attack and Putin supported the Saudi move to conduct a thorough and objective investigation of the incident. Putin and MbS also reaffirmed their mutual determination to continue close coordination to stabilize global oil prices, which again underlines the importance of their cooperation in the energy field.

In the light of the recent escalation in the Gulf and attack on Saudi oil facilities, Russia’s regional collective security proposal from late July seems even more timely and relevant. Moscow might well use this opportunity to market the idea more actively in a bid to initiate discussions on the regional level. It also creates an opportunity for Russia and European partners to pursue a diplomatic surge to prevent further escalation in the region.

Will Riyadh look to Moscow to buy arms?

Security of energy production and supply is an existential matter for Gulf oil producers. This is why Riyadh and other Gulf states will inevitably look for all possible ways to protect themselves from such attacks in the future. As a result, Saudi Arabia might become more serious about purchasing Russian arms, including S-400 and other air defense systems like Pantsir-S and electronic warfare systems that can protect its key economic and oil infrastructure. Of course, this opens up certain opportunities for Moscow to enhance its military-technical cooperation with the kingdom. Riyadh has already been interested in purchasing Russian arms for a while. It was discussed during King Salman’s visit to Moscow in 2017 and will likely be on the agenda during Putin’s upcoming visit to the Saudi Arabia. It is no coincidence that during the joint press conference after the Russia-Turkey-Iran summit, Putin suggested, “If Saudi Arabia wants to protect itself, it should make a wise state decision as Iran did buying S-300 and Turkey buying S-400 air-defense systems, which can securely protect all infrastructural objects in the kingdom.” The day after the Ankara summit, Russian state military exporter Rosoboronexport announced that it will present the latest Russian systems for combating unmanned aerial vehicles and other air attack weapons at the Dubai Airshow on Nov. 17-21.

However, Riyadh will likely face serious opposition and pressure from Washington if it decides to purchase Russian arms, limiting its freedom of maneuver. It is also worth noting that Putin’s “offer” to Saudi Arabia might actually put Russia in a tricky position as well. He offered to sell the kingdom the most sophisticated export version of Russia’s S-400 air defense system, while Iran, Saudi Arabia’s arch-rival and Russia’s ally, only has the older S-300 version. So if Saudi Arabia does eventually buy the S-400, Iran will likely react negatively, and it might even drive a wedge between Moscow and Tehran. Given the sensitivities, Moscow is unlikely to do anything that would upset its careful balancing act between Tehran and Riyadh, especially ahead of Putin’s long-planned visit to the kingdom later this year.

Alexey Khlebnikov is an expert on the Middle East at the Russian International Affairs Council. He previously as a consultant to various think tanks and institutions in the US, Middle East, and Russia. The views expressed in this article are his own.