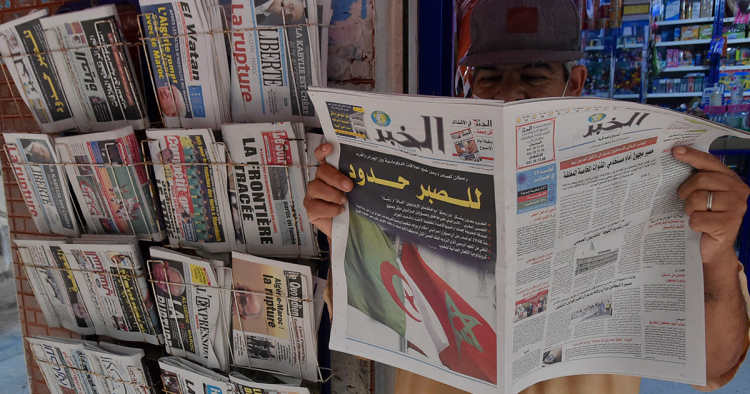 On Aug. 24 Algeria broke off its already minimal bilateral relations with Morocco, declaring this was due to the kingdom’s “hostile actions” and accusing it of involvement in the wildfires that struck the Kabylia region earlier that month. The heightened tension between the two countries brings into focus regional uncertainty and may spell the end of their limited collaboration in the energy sector.

The two countries have a long history of tense relations, behind which lie issues of political ideology, border demarcation, and competition for regional influence. Morocco and Algeria fought a short border war after the latter’s independence from France in the fall of 1963, and Algeria has long supported the Polisario Front in its struggle against Morocco for control of the Western Sahara. The land border between the two countries has officially been closed since 1994, a decision Algeria made unilaterally following Moroccan accusations that the Algerian military was behind a terrorist attack in Marrakesh in 1994. The Moroccan leadership, including King Mohammed VI, has repeatedly called for re-opening the border, something Algerian leaders have consistently rejected. Still, the two countries have managed to find limited avenues for cooperation around a gas pipeline that transports Algerian gas through Morocco and on to Spain and other European markets, although the future of this arrangement is now in doubt.

This month, however, tensions between Algeria and Morocco reached a level unseen in years, though an all-out military confrontation remains unlikely. Both governments have increased their military presence along the border, and while the prospects of armed conflict remain low, the growing tension provides each enough fodder to distract from more serious domestic issues. Indeed, the biggest challenge for Algeria’s military leadership has remained how to convince an inwardly focused population that Morocco is a greater threat to their well-being than internal economic, political, and security challenges.

The Algerian military and ruling elite’s dislike and suspicion of Morocco runs deep and goes back to the border conflict of the 1960s and Cold War-era ideological tensions. Old Algerian fears of Rabat’s designs for a “Greater Morocco” are no longer realistic — if they ever were — but nonetheless hawkish views of Morocco and concerns over its expansionist plans persist among Algeria’s military top brass. Morocco’s growing ambitions to increase its regional political and economic influence therefore remain alarming to some in Algeria’s military.

Recent domestic, regional, and global events have added to this ongoing suspicion and tension between the two neighbors. The U.S. recognition of Moroccan sovereignty over the Western Sahara dealt a blow to Algerian efforts to keep Morocco isolated on the issue. Although the conflict is by no means resolved, U.S. recognition is a major win for Morocco — and therefore, in this zero-sum game, a loss for the Polisario. Algeria is also extremely wary of growing Moroccan-Israeli cooperation. The two countries normalized relations as part of the deal struck with the Trump administration that granted Morocco U.S. recognition over its Western Sahara claims. Algeria remains a staunch ideological supporter of the Palestinian cause, and was extremely critical of Morocco’s decision to normalize relations. Adding to Algeria’s outrage, Morocco’s alleged involvement in the Pegasus spyware scandal prompted condemnations and accusations of spying on Algerian officials and top military brass. Algerian Foreign Minister Ramtane Lamamra’s fiery back and forth with Morocco’s ambassador to the U.N., Omar Hilal, in July regarding the Western Sahara further amplified tensions. In response to Lamamra’s reaffirmation of Algeria’s support for self-determination, Hilal, as he has provocatively done before, called on Algeria to adopt the same support for self-determination for its own long-restive Kabylia region.

Despite their sharp jabs against Algeria, the Moroccan leadership blames Algeria for the escalation and interprets it as a way for the Algerian leadership to save face while shunning King Mohammed VI’s recent calls for the reopening of the border and improved relations. In August, as wildfires swept through the Kabylia region, Morocco offered Algeria two of its firefighting Canadair aircraft. Algeria, despite having no firefighting fleet of its own, rejected the offer.

As tensions escalate, one of the key uncertainties with broader implications is the future of the Maghreb-Europe Gas (MEG) pipeline that began operations in November 1996 to export gas to the Spanish and Portuguese markets. The pipeline crosses through Morocco and in return Morocco receives 7% of the gas transported, which it uses for domestic consumption. The agreement has weathered previous diplomatic crises. However, this time, its future is more uncertain.

In addition to the MEG pipeline, Algeria also currently exports through Medgaz, an underwater pipeline that bypasses Morocco and is under expansion to handle higher flows. MEG pushes through 13.5 billion cubic meters (bcm) of Algerian gas yearly, while Medgaz has capacity for 8 bcm a year. Medgaz has announced plans to boost its export capacity to 10 bcm a year, but the expansion will not be operational until the end of the year at the earliest. The MEG transit agreement between the two states is up for renewal in October. For Morocco, if the deals falls through, this would deprive it of a key source of energy. Gas accounts for 10% of its domestic energy consumption, and the loss of access to Algerian gas would particularly impact two power plants located in northern Morocco — south of Tangier and south of Jerrada respectively — both of which rely on imported gas.

Over the past couple of years, with the pipeline agreement coming up for renewal, Morocco has signaled its intention to strike a more advantageous deal with Algeria, bolstered by the fact that the full ownership of the pipeline will pass from the Spanish company Naturgy to the Moroccan government as of Nov. 1, 2021. Morocco wants to boost its own access to gas as an important energy source, despite ongoing domestic efforts to diversify its energy mix and increase the share of renewables. If the two countries fail to reach an agreement, Morocco could face energy shortages that it might struggle to make up in the short to medium term, while Algeria would deprive itself of an important income source. For their part, Spain and Portugal would likewise have to make up energy shortages from a different supplier. If Morocco and Algeria take a hard-nosed approach, Algeria could deprive Morocco of a key bargaining chip, but it would be at the expense of its own domestic economic considerations. Algeria cannot afford to lose this access, particularly considering the crippling economic losses the country has faced in recent years. Although Morocco has promised to keep the pipeline open, it could risk being seen as blocking access to gas for European markets. Coming on top of its recent woes with European partners over migration, spying allegations, the Western Sahara, and the upcoming European ruling on the fisheries agreement, this could seriously damage Morocco’s ties with the EU.

As the three partners — Algeria, Morocco, and Spain — continue negotiations on this agreement that they all need, geopolitical considerations are not to be overlooked. Algeria is growing more anxious to reassert itself as a regional power following two years of turmoil at home and a longer-standing retrenchment from regional affairs. Cutting ties with Morocco, even at the risk of potentially jeopardizing its critical energy exports, is about drawing a line in the sand, a total unwillingness to allow Morocco any leverage, as well as an effort to draw the attention of domestic audiences away from problems at home and rally against an external enemy. For Morocco, these old conflicts and tensions that it wishes to leave behind create a challenge to its domestic and foreign ambitions. They stand as a reminder that the country is vulnerable, and that its regional and local stability are not to be taken for granted — something Algeria is keen to emphasize as it seeks to restore its wider regional role.