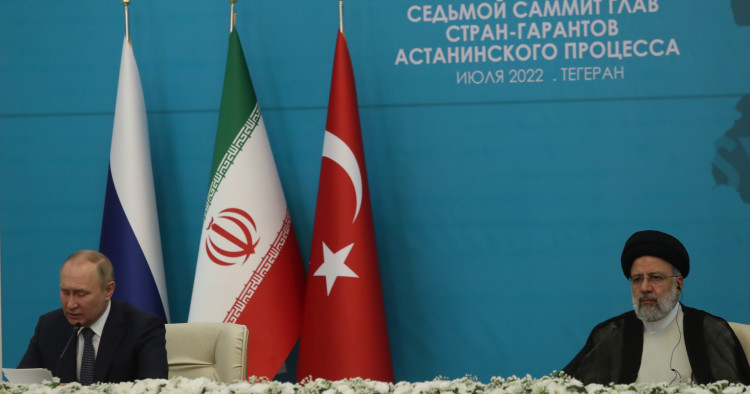 Russia and Iran seem to be entering a phase of renewed and strengthened cooperation. Given the current geopolitical climate, this may seem like an obvious friendship. Both countries face isolation in the international community and must find ways to maintain their military and economic capacities while overcoming sanctions and other pressure from regional and global opponents. Indeed, Russian President Vladimir Putin’s most recent trip to the Iranian capital, on July 19, made significant strides toward tangible security and economic agreements, leading some scholars to conclude that Iran is becoming a veritable ally to Russia in the latter’s great power competition — a development likely to further divide the Middle East.

However, despite many indications that Russia is increasingly Iran’s preferred international partner, over the past year, Russian Ambassador Levan Dzhagaryan has become a highly controversial figure in Tehran. Frequently the subject of public criticism, both in the local press and by the Iranian government for his myopic comments, communications, and photo-ops, Dzhagaryan is a walking reminder of the interventionist relationship that Russia has had with its southern neighbor over the past two and a half centuries. And as Russia once again seeks to aggressively expand its borders and influence, this history has advanced to the front of many Iranians’ minds, presenting a boldfaced asterisk to the emerging potential Russo-Iranian alliance.

Inflammatory photo-op with the British ambassador

In late August 2021, Dzhagaryan found himself in hot water following a photo-op with his British counterpart, Ambassador Simon Shercliff. The image was a purposeful reenactment of the famous photo of Winston Churchill, Joseph Stalin, and Franklin Roosevelt captured at the Tehran Conference in December 1943. In the modern version, the Russian and British ambassadors are seated in the same chairs and on the same steps as their historical national leaders, while Roosevelt’s seat remains vacant. The photo was met with fierce criticism from the Iranian government, with then-Foreign Minister Javad Zarif calling it "extremely inappropriate,” and Iranian Speaker of Parliament Mohamad Bagher Ghalibaf demanding an apology for the “unprofessional and inappropriate action of both ambassadors.”

For Iranians, the Tehran Conference is a painful reminder of what preceded and enabled it — the August 1941 Anglo-Soviet invasion of Iran. During World War II, both the United Kingdom and Soviet Russia, which for decades envisioned Iran to be split between their respective spheres of influence, feared that Nazi Germany might use Iranian territory and resources to attack the Allies to the north in the Soviet Union and to the south in India. Citing the 1921 Russo-Persian Treaty of Friendship, the Allied Powers occupied the country for the remainder of the war, exiled its monarch Reza Shah to Mauritius, and replaced him with his 21-year-old son, Mohammad Reza Shah, who would be overthrown in the 1979 revolution.

The controversies surrounding Dzhagaryan resurfaced again in February 2022, when Moscow’s envoy paid tribute to Alexander Griboyedov at a wreath-laying memorial ceremony. The Russian embassy’s tweet advertised the ceremony with the hashtag “We Remember,” sparking public outrage. An Iranian news outlet labeled Griboyedov “the most notorious Russian ambassador in Iran” and condemned Dzhagaryan’s “provocative” actions. Meanwhile, the foreign ministry’s spokesperson, Saeed Khatibzadeh, commented that any “seasoned ambassador knows that he must not do things to hurt the feelings of his host country.”

Griboyedov was a 19th century diplomat who, in Iran, represents one of the most troubled periods in Russian-Iranian relations. Following a series of violent border disputes in the South Caucasus between 1796 and 1828, the Russians — whose more modern military eventually overpowered the Persian forces — forced the Iranians to agree to a series of humiliating terms, first in the Treaty of Golestan (1812) and later in the Treaty of Turkmanchai (1828). Iran was compelled to cede all disputed territory to Russia, permit the latter to nominate consuls and commercial agents in Iran and set Iranian customs rates, and allow the Tsarist Empire to retain full judicial control over its own subjects in Iran. Writing in 1915, British traveler and historian Sir Percy Sykes aptly describes the imperialist precedent that these treaties set and how detrimental they were to Persian autonomy:

"It marked the beginning of a new era, since Persia from that time ceased to be the entirely independent power that had been courted by France and England […] it is the basis on which all western nations have since conducted their intercourse with Persia, and the extra-territorial privileges it introduced for Russians have been extended to other Europeans and are in force to this day.”

Griboyedov was the author of the Treaty of Turkmanchai and, as ambassador, regularly enforced its interventionist terms. He was eventually killed by rioters who overtook the Russian embassy in Tehran on Feb. 11, 1829 (150 years prior to the U.S. embassy takeover in 1979).

Turkmanchai and Golestan remain very much on Iranians’ minds when they think about their relationship with Russia today. In an interview with the Russian ambassador, a journalist commented, “I do not want to talk about ‘Golestan’ and the treaties at that time, but they are in the back of people’s mind now that a series of agreements have been signed with both China and Russia.” Even Supreme Leader Ayatollah Ali Khamenei seemed worried about the potential for renewed Russian advances into the South Caucasus when he met with President Putin, noting, “If there is a policy to block Iran’s borders with Armenia, the Islamic Republic will oppose it, since this border has been a transit link for several thousand years.”

Last month, Dzhagaryan once again found himself embroiled in controversy. On July 16, days before Putin arrived in Tehran, Shargh News conducted an exclusive interview with Russia’s ambassador that featured a candid discussion of the state of Iranian-Russian relations. The interviewer, Ali Pakzad, grilled Dzhagaryan on several concerning developments, including Russia’s invasion of Ukraine and the precedent it sets, rumors that Moscow stalled the talks on renewing the Joint Comprehensive Plan of Action (JCPOA) on the Iranian nuclear program to fit in concessions for itself, hiccups in bilateral economic and energy cooperation, as well as Russia’s relationship with Israel. He also pressed the ambassador to explain the spectrum of Russian attitudes toward Iran, and how both states’ cultural differences and centuries of history might complicate relations today. Many of Pakzad’s questions were pointed and demanded that Dzhagaryan provide answers to an essential question: Whether Russia intends for Iran to be an equal partner or an inferior pawn.

The Russian envoy’s answers, however, were not particularly diplomatic. He criticized Iran for its inability to pay Russian debts and doubled down on his comments that the Islamic Republic’s conservative social norms stifle Russian tourism. Most importantly, Dzhagaryan seemed to ignore the fact that anxieties toward Russia exist in Iranian society, and he clumsily towed the line that both nations are and should be seamlessly aligned against a common Western enemy. Aptly summarizing the heated debate, Shargh News published the interview with the title “Western Interference, or Eastern Friendship?”

In the following days, Iranian media criticized many of the ambassador’s remarks and pushed back on his assumption that Iran and Russia’s mutual distaste for the West creates a durable, anxiety-free partnership. Khabar News demanded that the government step in to “put the insolent ambassador in his place,” stating that “the continuation and intensification of the interference and insults of the Russian ambassador […] have seriously wounded public opinion.” Another news outlet published a column, titled “The Russian Ambassador and the Literature of the Qajar Era,” which compared the current Russian ambassador’s lack of respect and presumptuous claims about the Iranian-Russian relationship to that of the Russian diplomats of the 19th and early 20th centuries. It concluded, “We advise Levan Dzhagaryan to read the history of Iran’s struggles in the last 60 years and pay attention to the fact a revolution has taken place in Iran against the interference of Western and Eastern colonialists.”

At first glance, some of these controversies might seem like an overreaction. Dzhagaryan himself has blamed Western news agencies such as Radio Farda, Iran International, and BBC Persia for fanning these PR fires to make them appear bigger than they are. However, the backlash that Dzhagaryan continues to experience is a manifestation of the Iranian anxiety that cooperation with Russia will result in one-sided imperial manipulation rather than two-sided cooperation. When examining the history of Russo-Iranian relations, this hesitancy appears quite valid.

Unfortunately for Iran, options seem to be limited. A renewed JCPOA is far from certain, and as a new multi-polar world order emerges, the Islamic Republic realizes that it needs powerful international allies that can help to jumpstart the Iranian economy and cooperate on key security concerns. The controversy surrounding Ambassador Dzhagaryan is an embodiment not only of anxiety but also of the frustration felt inside Iran that the country is stuck between a rock and a hard place. On the one hand, a Russian alliance could provide economic relief and increased geopolitical leverage. On the other hand, such a relationship, if overwhelmingly skewed in Moscow’s favor,  would go against every anti-imperialist principle of the Islamic revolutionary narrative, forcing Iranians to overlook centuries of troublesome history with the hollow hopes that Russia might treat them differently this time. This is the challenge Iran faces today as it once again captures the attention of global powers vying to expand their spheres of influence.

Thomas Halvorsen is the executive assistant to the president and secretary to the board of governors at the Middle East Institute. Prior to joining MEI, he completed an M.Litt. in Iranian Studies and an M.A. in International Relations and Middle East Studies from the University of St Andrews.