Why Securing a Cease-Fire Will Be Harder This Time 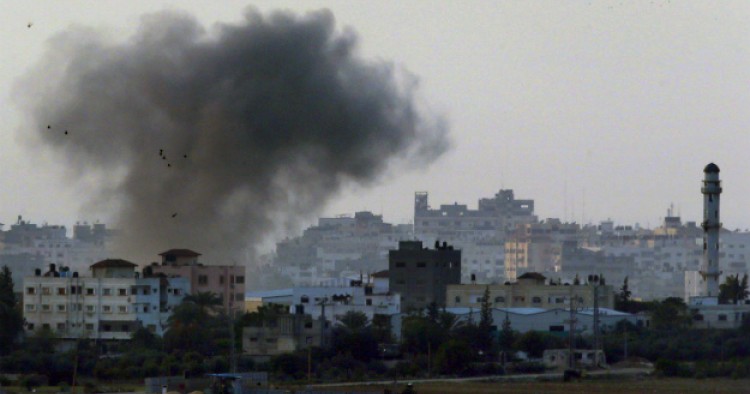 In thinking about how the crisis between Israel and the Hamas leadership in Gaza might play out, it’s useful to reflect upon the preceding Israeli incursion into Gaza in November 2012.  Although that crisis originated somewhat differently than the current one, there was a similar dynamic, characterized by rocket barrages from Gaza with little military impact on Israel, an increasing tempo of Israeli airstrikes against targets in Gaza, a mounting Palestinian civilian death toll, the call-up of IDF reserve units, and the deployment of ground forces adjacent to Gaza in apparent preparation for an incursion.  As now, this posturing was meant to intimidate Hamas, impress Israeli voters, and motivate anxious third parties – the US and Europe in particular, but Arab states as well – to press Hamas to back down, lest the calamity they feared come to pass.

However, the two episodes diverge in important ways.  In 2012 there was an Egyptian government led by the Muslim Brotherhood that was in a position to influence Hamas decision-making in the crisis. Muhammad Morsi was able to convince his Gazan fellow travelers that he was acting in their interest and would protect their equities in a negotiated resolution to the spiraling crisis.  Morsi was able to work effectively with President Obama to hammer out a framework for a cease-fire that the two leaders could offer to their respective allies.  (In a telling moment, Obama had to spend much of his long awaited pivot-to-Asia trip in serial telephone calls to Morsi and  Benjamin Netanyahu about the fighting in Gaza.)  In the process, Egypt and the United States could play the bad guys, allowing the Israeli and Hamas leaders to intimate to their constituencies that Washington and Cairo had essentially pressured them to back down before military victory could be won.

In 2014, however, the Sisi government has a much different relationship to its Hamas counterpart in Gaza.  Whereas Morsi was the patron to a Hamas client, Sisi is, in effect, jailer to Hamas prisoners.  The Egyptian government’s domestic campaign against the Muslim Brotherhood has naturally extended to the Brotherhood-dominated leaders of Hamas.  This arrangement has given Egypt a measure of control, especially over the stream of violent radicals entering the Sinai from Gaza through an astounding tunnel network.

However, it also results in Egypt having diminished leverage in the ongoing crisis.  Hamas can’t rely on Cairo to secure its interests in a negotiated stand-down, nor can Egypt hint at concessions to a cooperative Hamas leadership in the way that Morsi could.  Thus, despite Sisi’s constructive efforts to involve Egypt in a mediating role, Cairo’s ability to influence Hamas is likely to be quite limited, as Hamas’s rejection of its recent truce proposal shows.

In the absence of effective Egyptian participation, and with Hamas’s political leadership holed up in Doha, a vital key to a cease-fire seems unavailable.  Hamas is therefore on autopilot, trying to wrest any tangible win from a slugging match that has barely damaged Israel, while exposing the Gazan people to constant air assault and the possibility of a costly ground invasion. It has no outside allies to call upon; no friendly power it can claim has compelled it to back down.

The Israeli government has a congruent problem.  As long as rockets keep falling, Netanyahu can’t back off, and as miserable as conditions are for the people of  Gaza, Hamas is prepared to take a good deal more punishment than Israel has so far delivered.  This has left Israel with three unattractive options.  First, it could wind down the pace of airstrikes in exchange for a decrease in rocket launches, leading to a cease-fire.  This would look awfully close to a Hamas victory, or at least evidence of Israeli military ineffectuality.  Second, Israel could maintain the status quo and continue hammering on Gaza until something breaks.  Third, and for some Israeli officials most promising, would be a ground incursion that truly punishes Hamas, deterring future attacks and comprehensively disarming it of missile and rocket stockpiles and manufacturing facilities.  One Israeli minister described this as a “root canal” instead of a “temporary filling.” Some Israelis see Hamas’s response to the Egyptian truce proposal as adequate diplomatic cover for just such an operation.

In thinking through this last option, we need to  recall yet another precedent: Operation Cast Lead, which involved a large scale ground incursion into Gaza in the winter of 2008-2009.  The entry of Israeli forces, which, like the United States military, seeks to minimize its own casualties, inflicted heavy Palestinian noncombatant losses and infrastructural damage.  This was due in part to the co-location of Hamas military assets with civilian installations and in part because a casualty averse force will make liberal use of firepower to shift the casualty burden to the other side. Although that operation failed to disarm Hamas, it did provoke an international uproar, which Israel made worse by excluding journalists from the battlefield.  At the time, this led to talk in Europe about economic sanctions, such as a ban on Israeli citrus exports, and of course the Goldstone Report, which accused Israel of targeting civilians.  The mood in Europe now is, if anything, even more sour, and an incursion would probably lead to action in the UN Security Council that would put Washington in a difficult position.

The Israeli government is undoubtedly sensitive to these risks and will likely conclude that disarming Hamas would entail unacceptable risks to its international reputation. Perceptions of Israeli bombardment of Gaza and wrenching stories of civilian casualties have already raised concerns about proportionality.  For the moment, these are somewhat offset by Hamas’s missile barrage, but the pressures and short-term incentives to opt for a ground offensive remain quite strong, especially with the murder of the three Israeli teens keeping emotions high. Washington has been preoccupied by the jihadist threat to Iraq and managing the endgame of nuclear talks with Iran, but as options and arbiters for resolving this conflict are in short supply, it will have to stay focused on helping the Palestinians and Israelis find a way to climb down.