Will Pakistan Reassess its Ties to Terror Groups after Trump Speech? 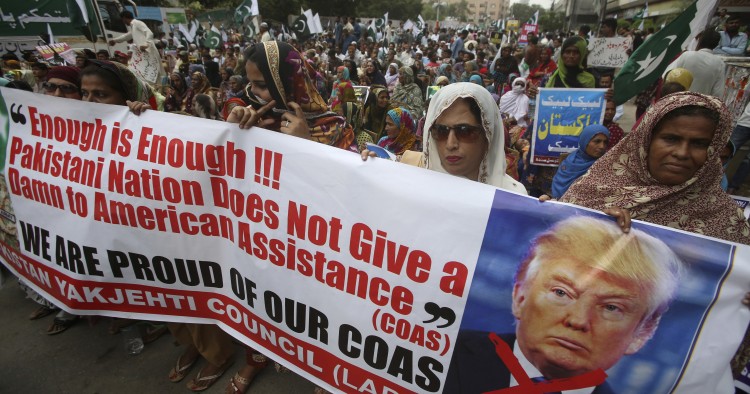 The major components of President Donald Trump’s much-awaited Afghanistan strategy are sufficient to give Pakistani strategists sleepless nights. The new plan will acknowledge Pakistan’s significant role in providing safe havens for terrorists; escalate war against the Afghan Taliban while denying it the ability to fight its way into positions of power; and enhance India’s role in stabilizing and developing Afghanistan. Moreover, the strategy does not provide deadlines for withdrawal of U.S. forces.

While announcing his intention to deploy more U.S. troops to Afghanistan, Trump severely criticized Pakistan for offering a sanctuary for “agents of chaos.” He stated, “We can no longer be silent about Pakistan’s safe havens for terrorist organizations…We have been paying Pakistan billions and billions of dollars. At the same time they are housing the very terrorists that we are fighting…That will have to change and that will change immediately.”

Throughout the course of an ever-deteriorating relationship between Islamabad and Washington, Pakistan has served as a refuge for the intractable Taliban. This role poses a massive obstacle on the road to a cooperative interstate relationship. Trump’s new Afghan policy speech was intended to serve as America’s ‘big stick’ with which to make Pakistan change its behavior in relation to Afghanistan.

The Obama administration also issued similar warnings to Pakistan. Nobody has forgotten the unusually candid testimony that Mike Mullen, then chairman of the Joint Chiefs of Staff, gave to the U.S. Senate Armed Services Committee in 2011 regarding Pakistan’s behavior. In Mullen’s controversial terms, the Haqqani network represents, “a veritable arm of Pakistan’s Inter-Services Intelligence agency.”

Also in 2011, Secretary of State Hillary Clinton and CIA Director David Petraeus visited Pakistan and tried to “push the Pakistanis very hard” to end their support for terrorists in Afghanistan. However, these actions outraged Pakistan’s security establishment to such an extent that its leadership shut down supply routes to U.S. forces in Afghanistan for several months. Six years on, the United States is still struggling to get Pakistan to fall in line.

Pakistan’s response to Trump’s strategic move has been predictable and uncompromising. In the immediate aftermath of Trump’s tough talk, Pakistan began to defend its ‘strategic assets’ in Afghanistan. After stating that his country doesn’t harbor terrorists, Pakistani Prime Minister Shahid Abbasi issued a veiled warning, explaining that Pakistan does “not intend to allow anybody to fight Afghanistan’s battle on Pakistan’s soil.” Trotting out Pakistan’s oft-repeated mantra of ‘political settlement,’ he rejected Trump’s emphasis on a military dimension by arguing that “the military strategy in Afghanistan has not worked and it will not work.”

Pakistan’s foreign minister, Khawaja Asif, also arguedthat the Americans “should not make Pakistan a scapegoat for their failures in Afghanistan.” Instead, he told the United States to keep its foreign aid—Pakistan wants America’s confidence, not its dollars. Maintaining this defiant posture and dismissing allegations of double-crossing, Pakistan’s army chief, Qamar Javed Bajwa, said on September 6 that “if Pakistan has not done enough against terrorism, then no country in the world has done enough.”

Both China and Russia have expressed criticism of Trump’s new position on Pakistan. Coming to Islamabad’s defense, a Chinese foreign ministry spokesperson stated, “Pakistan is at the forefront of the counter-terrorism efforts. For many years, it has made positive efforts and great sacrifices for combating terrorism and made important contributions to upholding world peace and regional stability.”

While Pakistan can survive without U.S. aid, the Pakistani military is well aware that China’s anxiety regarding the security of China-Pakistan Economic Corridor would ultimately curtail Pakistan’s ability to support destabilizing jihadist elements. Moreover, the recent BRICS declaration that labels three specific groups in Pakistan as terrorist entities is surely a wake-up call for Islamabad. India’s presence in the BRICS may have influenced the language of the Xiamen declaration, but Pakistan’s all-weather friend, China, and the newfound friend, Russia, have also voiced concern regarding terrorist groups in Pakistan.

The aftermath of Trump’s speech is an inevitable rise of anti-American rhetoric in Pakistan’s popular circles. Nonetheless, the sober and realist voices of Pakistan feel that the military’s tolerance for externally-oriented terrorist organizations has become strategically unsustainable. As one Pakistani columnist describes, the military’s cat-and-mouse game with terrorism “would have continued unchallenged” if Trump had not upped “the ante by laying aside the niceties and evasions that characterized the U.S.-Pakistan dialogue under earlier presidents. The new bluntness and proposed regional realignment offer a glimmer of hope for an overdue questioning” of Pakistan’s destructive security paradigm.

Pakistan’s notable scholar, Rasul Bakhsh Rais, has similarly remarked that due to “being at the crossroads of a complex geopolitical tangle and vulnerable to domestic challenges, Pakistan doesn’t have the luxury of ignoring American threats.” Another prominent Pakistani scholar, who has been an advocate of greater U.S.-Pakistan engagement, has cautioned that “Pakistan can’t pretend it won’t hurt badly if the U.S. flexes its muscle.”

Given the current mood in Washington, Pakistan’s army may find it difficult to avoid taking clear and concrete action against its terror sanctuaries. India’s leading strategic thinker, C. Raja Mohan, argues that notwithstanding the hyperbole of “playing the China card against the U.S., Pakistan is acutely conscious of the dangers of being treated as a rogue state by the West.”

Pakistan seems to be on the back foot now. However, Pakistan’s army cannot be expected to give up its treasured strategic investments in cross-border terrorism without concerted efforts. It may again propose some level of tactical cooperation with the United States in countering terrorism in Afghanistan while pledging to bring the Taliban to the negotiating table.

Surely, the biggest hindrance to peace in Afghanistan is Pakistan’s tendency to view its relationship with Kabul through the prism of its anti-India obsession, which, in practical and psychological terms, has left Pakistan struggling. And, of all the several terrible policies of Pakistan, the Afghan misadventure ranks as one of its worst. Changing this dynamic requires reformulation of Pakistan’s strategic culture—a culture driven by the military’s stranglehold on Pakistan’s foreign and security policies.